Rocket League to get exclusive content on Xbox One

Rocket League has been one of the most convincing success stories in gaming during this last year. The seemingly silly and simple game turned out to be something with an intense skill-cap and potential for not only casual fun, but also some seriously competitive eSports. A big part of Rocket League’s success is the fact that, when it launched, it was free for PS4 users that had a PS+ subscription. This may have brought some people to the conclusion that Rocket League was strictly in partnership with Sony, but recent developments would suggest otherwise.

We’ve known for a while now that Rocket League is going to be rolling its way onto the Xbox One in February, but now we know that Xbox users are going to be getting some unique cosmetic items as well. The cosmetics we know of are going to be coming from Sunset Overdrive, and include a new antenna and a new boost trail, both based on the fictional energy drink “Overcharge,” which Sunset Overdrive’s plot revolves around. The antenna is the round, smiling face of Fizzie, the drink’s mascot, and the boost trail, as you might imagine, just features a flood of Overcharge propelling you forward, accompanied by the sound of Captain Ahab, a weapon featured in Sunset Overdrive. 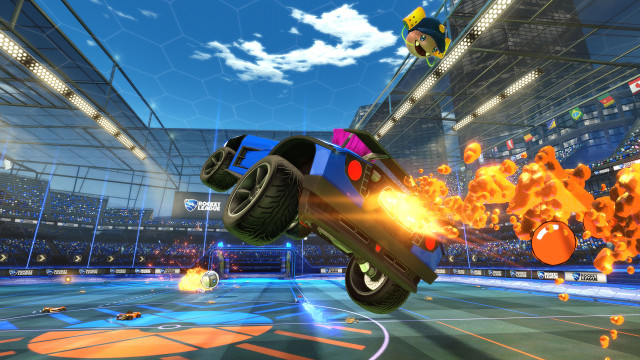 We also know that Rocket League is putting in the Warthog from Halo as an unlockable vehicle. This is not unlike the cosmetics that PS4 users received based on the Playstation exclusive “Twisted Metal,” and shows that Rocket League seems to be without bias towards any platform. While Xbox won’t feature the same crossplay with PC that PS4 does, Xbox One players will still be getting their fair share of exclusive goodies.

While we only know about the Sunset Overdrive attachments so far, you can bet that you’ll be seeing more Xbox-related cosmetics as time goes on. Rocket League has been constantly adding new cosmetics in frequent DLC packs, and they don’t show any signs of slowing down. With the upcoming launch of Gears of War 4, you can definitely expect to see some Gears of War related cosmetics – maybe even Tomb Raider and Crackdown themed ones as well. Really, the sky’s the limit now that Rocket League has access to the whole gamut of Xbox franchises.