Two other big changes are the removal of the full-sized type-A HDMI connector in exchange for two Type-D micro HDMI connectors, and the placement of the Gigabit Ethernet jack next to the 4 USB connectors. The Raspberry Pi 4 also sports 2 USB 2.0 ports and 2 USB 3.0 ports. Here’s the video showing off the new Raspberry Pi 4. 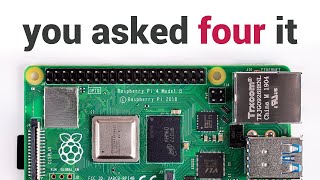 As noted in a post on the Raspberry Pi blog, here’s a look at all the updated specifications available in the new Raspberry Pi 4 Model B:

“Instead, we’re using the Mesa “V3D” driver developed by Eric Anholt at Broadcom over the last five years. This offers many benefits, including OpenGL-accelerated web browsing and desktop composition, and the ability to run 3D applications in a window under X. It also eliminates roughly half of the lines of closed-source code in the platform.”

The Raspbian Desktop software is getting revamped too. Based on the upcoming Debian 10 Buster release, the new Raspbian Buster desktop software offers “a modernised user interface, and updated applications including the Chromium 74 web browser.” Head on over to the Raspberry Pi downloads page to download the new Raspbian Buster desktop for yourself. The new Raspberry Pi 4 (4GB RAM) offers enough technical specifications to run full Windows 10.