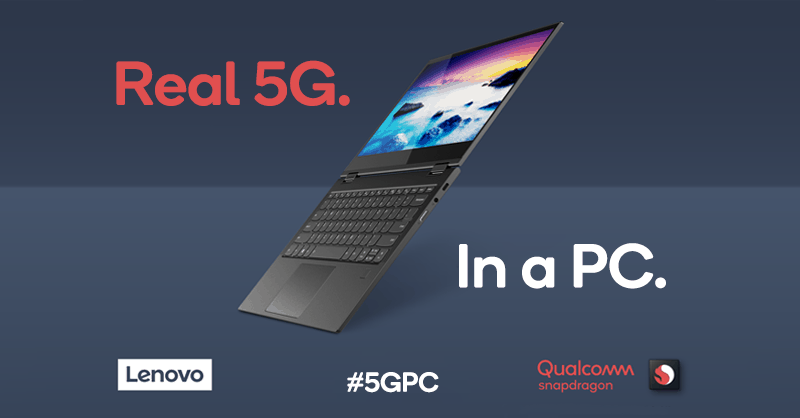 The biggest chip makers and PC manufacturers are all present at the annual Computex PC expo in Taipei this week, and Qualcomm and Lenovo already made a big announcement with “Project Limitless.” Both companies are collaborating on the world’s first 5G PC powered by Qualcomm’s Snapdragon 8cx SoC, the company’s latest premium chip for Always Connected PCs that was announced back in December.

We don’t have many hardware details about Project Limitless for now, except that it will leverage the Snapdragon 8cx 5G platform including Qualcomm’s X55 5G modem, which should deliver peak download speeds of up to 2.5 Gbp. Qualcomm also promises “extreme multitasking performance” with its 7nm chip, and the chip maker published a series of video today to showcase popular desktop apps like Outlook, Excel and Photoshop running faster on Snapdragon 8cX systems compared to PCs with chips from “competitors” (read: Intel and AMD)

The first generation of Always Connected PCs powered by Qualcomm chips didn’t really shake up the PC market, but this could all change once the Snapdragon 8cx can deliver both multi-day battery life and the kind of performance you can expect from traditional x86 chips. Qualcomm announced back in February that its new Snapdragon 8cx 5G PC platform would be coming to Always Connected PCs later this year, but the chip maker is saying today that Project Limitless won’t be ready until early 2020. This isn’t really surprising as 5G networks will only launch in select areas this year, with mobile carriers expected to expand their 5G investments in 2020.

Windows 10 news recap: May 2019 Update starts rolling out, Your Phone gets some new updates, and more