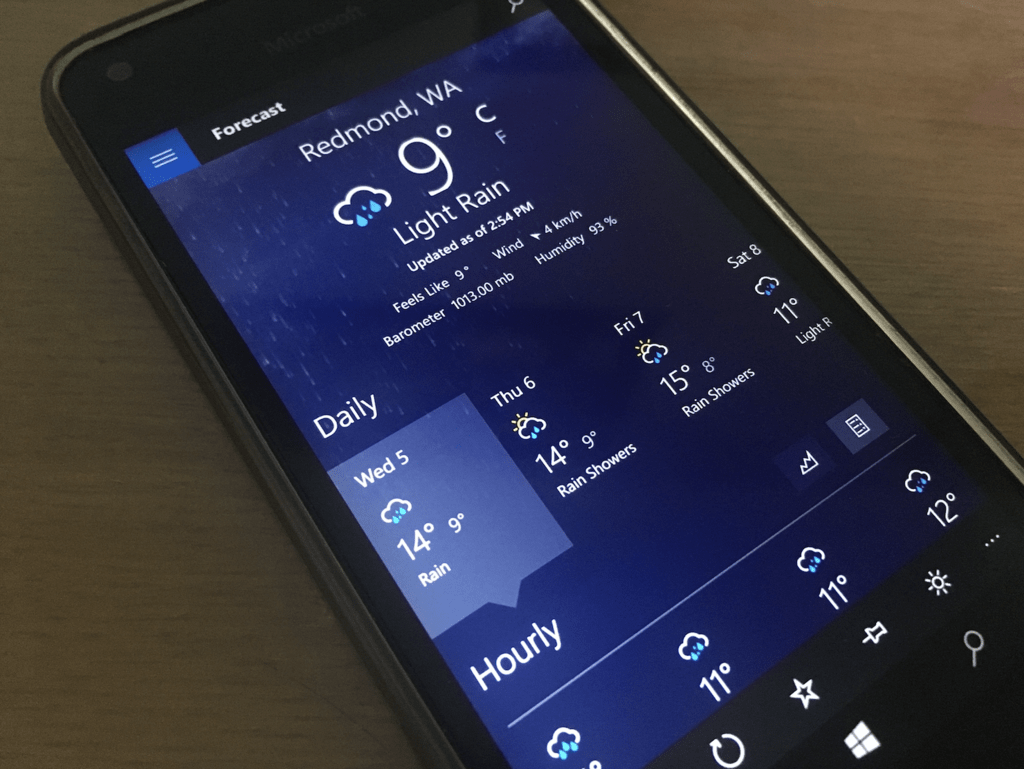 If you're still running an older Lumia, or are considering buying one, you might want to take note of a potentially troublesome issue we've spotted recently. It seems devices which are still running the Windows 10 Anniversary Update (build 14393) are no longer able to install the latest versions of Microsoft's MSN apps from the Microsoft Store.

The issue came to light after this author hard reset a Lumia 1520 running the Anniversary Update. Immediately after completing the install, I observed the Microsoft Store update the News, Weather and Money apps to their latest versions – or so it seemed.

Upon launching the apps, it became apparent the Store had actually pushed down older builds of each one. News and Money appeared as the Windows Phone 8-era version 3 releases, characterised by the horizontally scrolling panorama interface. Weather, meanwhile, "updated" to version 1. 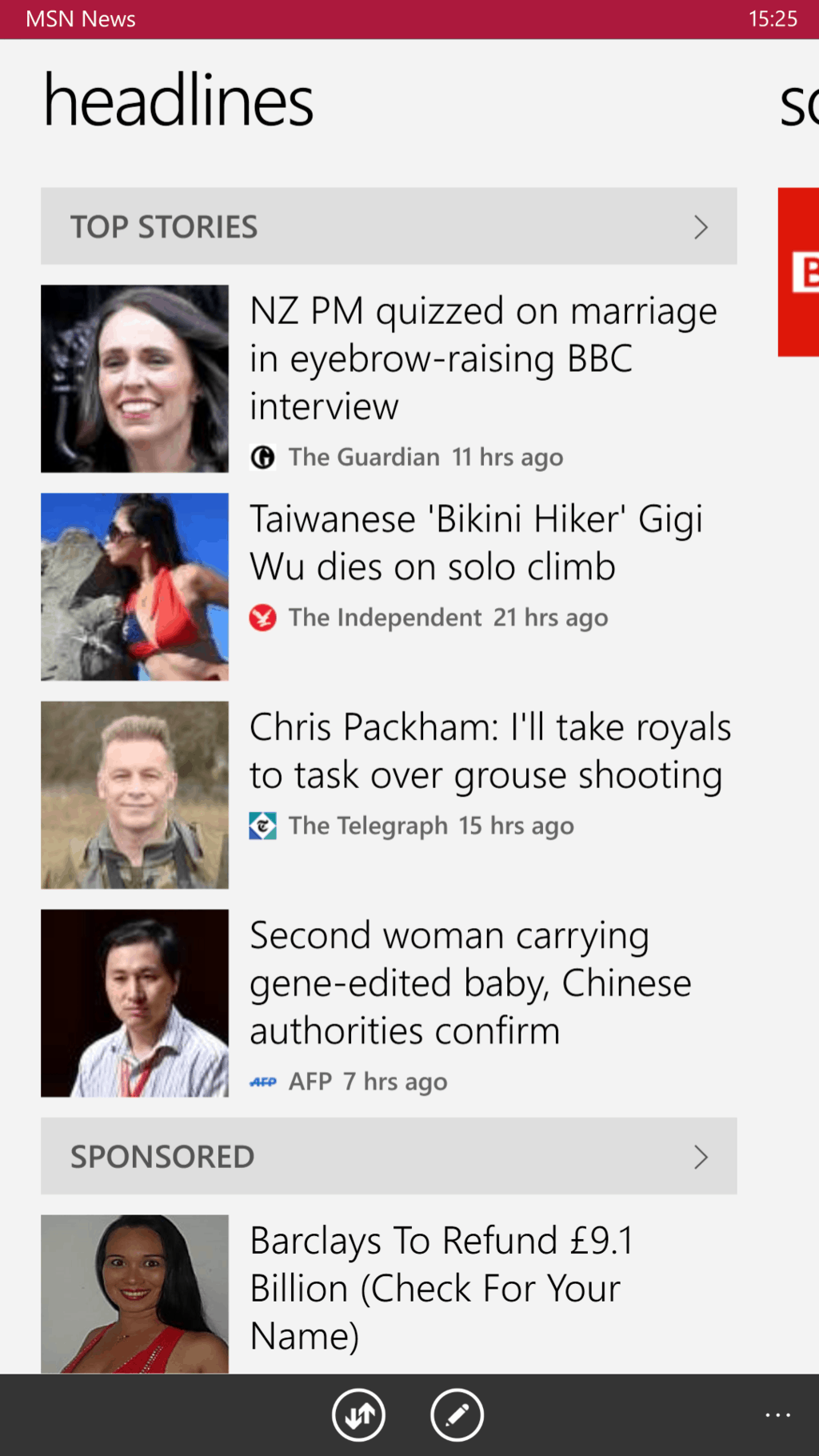 Returning to the Windows Store, I pressed "check for updates" multiple times to attempt to get the new versions to install. Each time, no pending updates were displayed, even after multiple phone reboots. I proceeded to reinstall News and Money (Weather cannot be removed) several times, with version 3 always being redownloaded by the Store.

Curious, I switched devices to my Lumia 930, also running the Anniversary Update. This device was running the latest (version 4) releases of each app quite happily, including the new "Microsoft News" with grey splash screen. After uninstalling the apps and reinstalling from the Store, the 930 was also offered only the old version 3 releases. I've been unable to provoke the Store to offer version 4 again, even though it evidently updated automatically when the new app was first released.

I later reproduced the problem once again using a clean 14393 installation in the Windows Phone Emulator. As with the physical devices, I watched as the apps "updated" back to their Windows Phone 8 releases, with the Store subsequently refusing to offer any newer version. Further testing amongst the OnMSFT team has determined that newer builds of Windows 10 Mobile are not affected.

At present, it's unclear whether this is an intentional change. We haven't seen any documentation to suggest the MSN apps are no longer supported on Windows 10 Mobile. However, it's also worth noting that the Anniversary Update is now end-of-life, since Patch Tuesday updates ceased back in October. 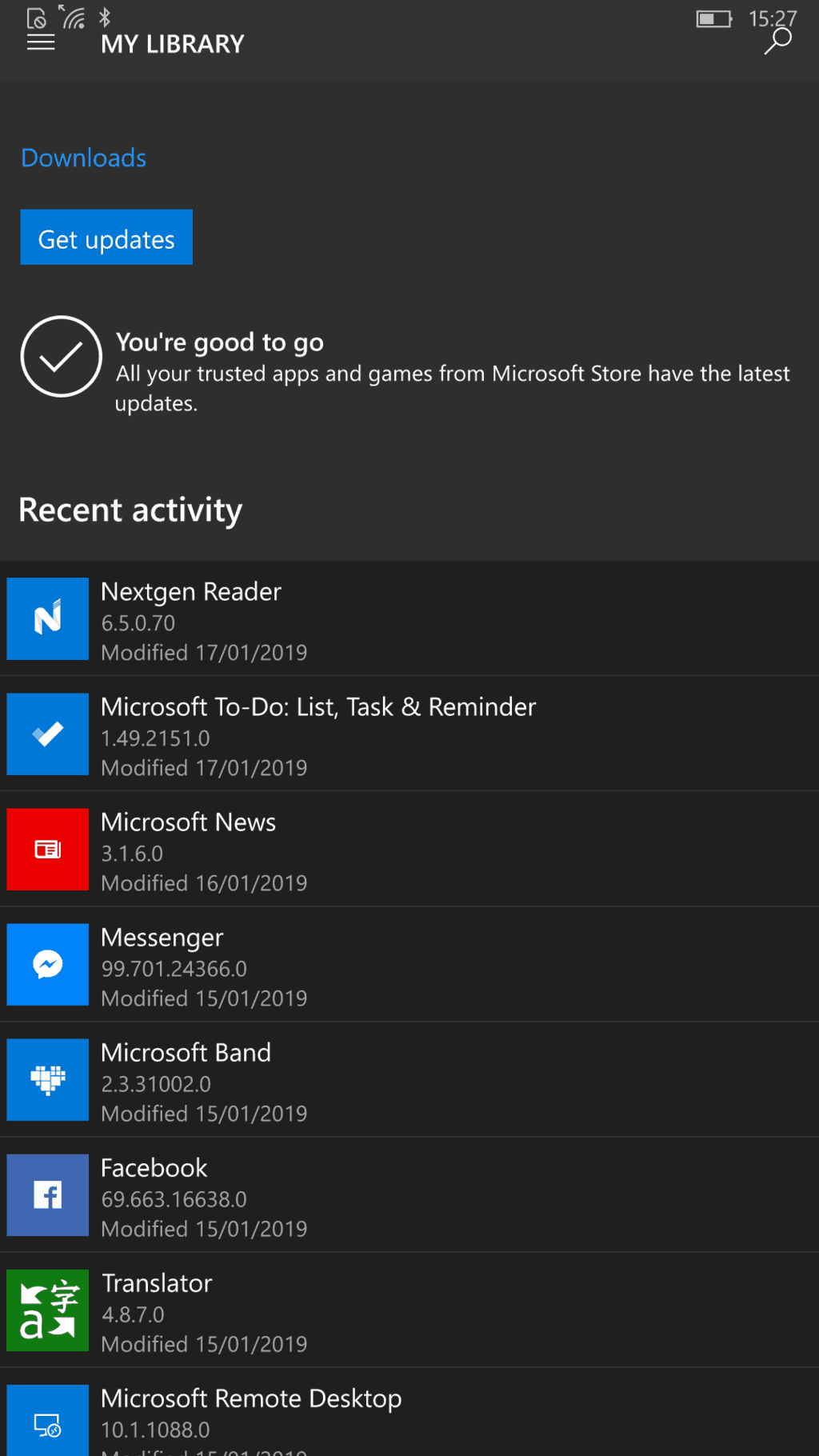 Nonetheless, it's uncanny that the Store is "updating" the apps to older versions than are included with the build. Out-of-the-box, Windows 10 Mobile has always shipped with the modern apps, including the hamburger menu and vertically scrolling interface. These apps operated normally on both my 1520 and the Windows Phone emulator, prior to the Microsoft Store's automatic app updates.

It's also telling that my 930 was running the latest, version 4 "Microsoft News"-branded releases of the apps without any problems, before I uninstalled them in the interests of testing for this article. This was true also of the 1520, prior to its hard reset.

Time to draw some conclusions. Based on our testing, Windows 10 Mobile Anniversary Update users should avoid uninstalling News, Money or Weather at all costs for the time-being. We'd be interested to hear if you observe the same issues after uninstalling the apps – but remember, you do so at your own risk. At this time, we can find no way to reinstall version 4 through the Store, so any attempt to reproduce this problem may result in your device getting stuck with the outdated apps too. 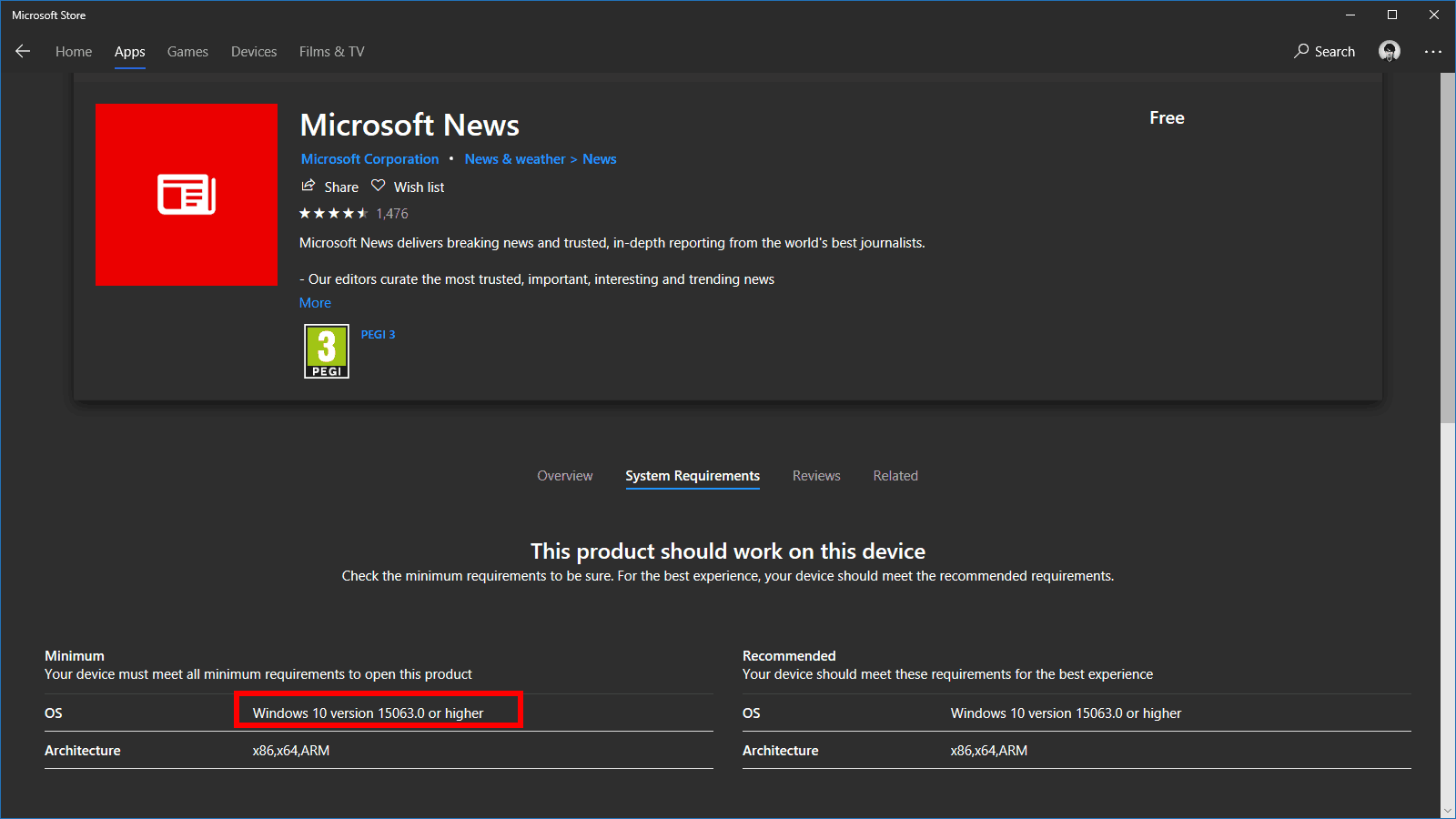 With no comment, documentation or acknowledgement from Microsoft, we can only speculate on what the issue is. However, some explanation can be found in the Microsoft Store listings for each of the apps. They all now specify the Windows 10 Creators Update (15063) as the minimum version.

It seems Microsoft has updated this requirement, without making the old app packages available as a legacy option for 14393 deployments. Although this is speculation, it appears that new installs onto 14393 find the Windows Phone 8 apps are the only suitable packages. This is despite the obvious ability of the v4 apps, including the rebranded "Microsoft News," to run on Windows 10 build 14393.

So, should Microsoft fix it? Although 14393 is technically unsupported, this marks a step backwards in functionality compared to the build's initial release. It's also worth mentioning that 14393 is still the last officially supported build for all pre-950-series Lumias, and is what will be delivered when you use the Upgrade Advisor app on a new phone. Microsoft should produce archival app packages of News, Money and Weather which target 14393, ensuring they remain available to users who are remaining on the build. 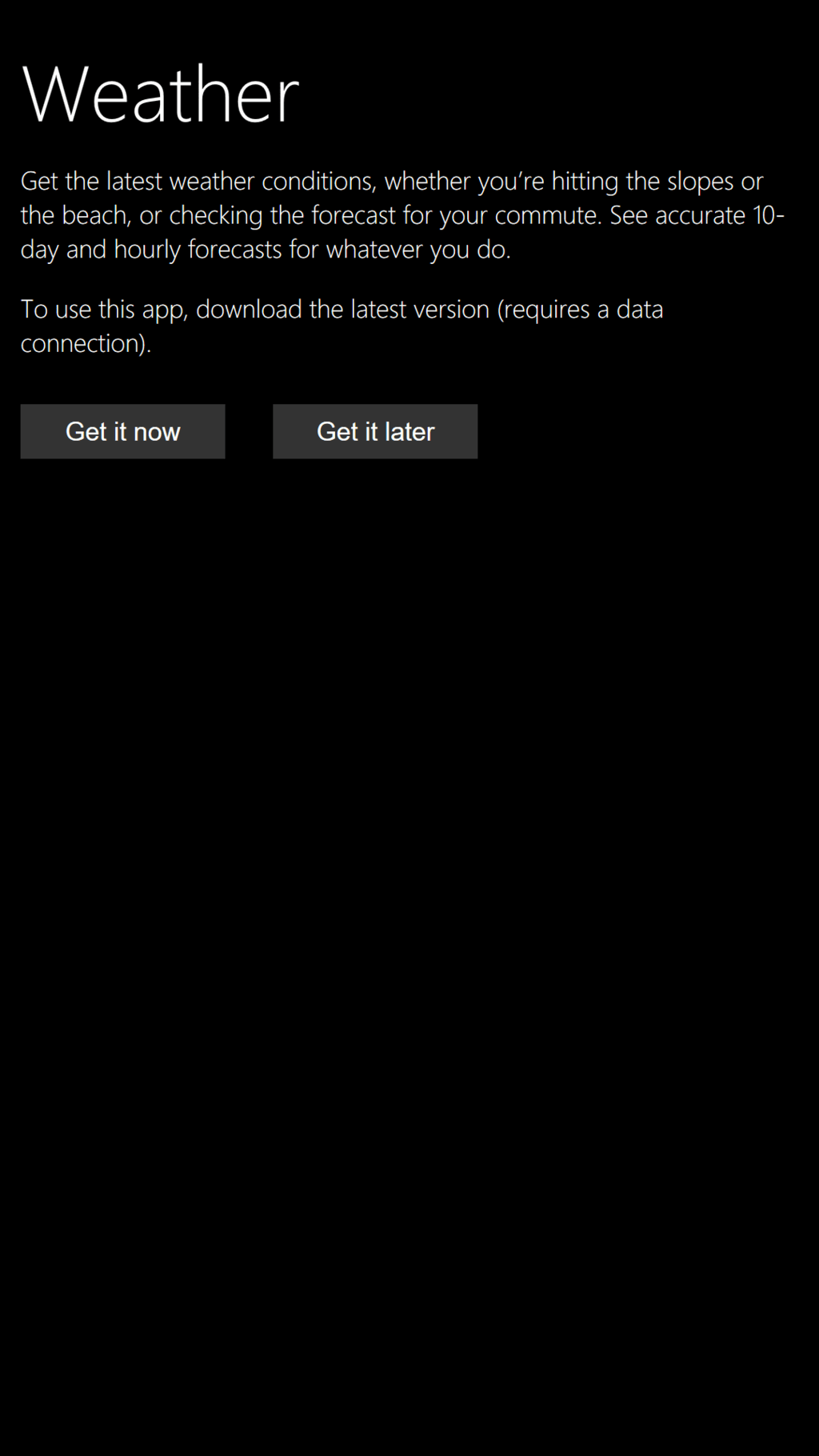 Thankfully, for the time-being, the Windows Phone 8 versions of News and Money are still fully functioning, and I've had no problems browsing content in the apps – accompanied by a dose of nostalgia for Windows Phone 8's panoramas.

It's a different story for Weather, however. On my 1520, it "updated" to version 1, which now displays a single screen, prompting to install the new app version. Pressing either button opens the latest Weather listing in the Store, which says the app is already installed…

It seems loyal users of older Lumias are going to have to make do with outdated News and Money apps, and a useless Weather app, next time they hard reset their device.