It’s now been two years since Microsoft started shipping its HoloLens headsets to developers and businesses, and we already know that the company is working on a successor. Harry Shum, executive vice president of Microsoft’s Artificial Intelligence (AI) and Research group revealed last year that the next-gen HoloLens would feature a dedicated AI coprocessor for implementing deep neural networks, but Microsoft is apparently planning some other exciting updates as well.

According to a new report from Windows Central, the next HoloLens is currently codenamed “Sidney,” and it could feature an ARM processor providing better battery life and LTE connectivity. As a reminder, the first gen HoloLens is powered by an Intel Cherry Trail processor, providing up to three hours of battery life.

The report also says that Microsoft’s new HoloLens headset may provide a wider field of view compared to the first generation device. It’s true that there’s quite a difference between the reality and what Microsoft usually show in marketing videos, and Microsoft hopefully found a way to improve the field of view in the new version. 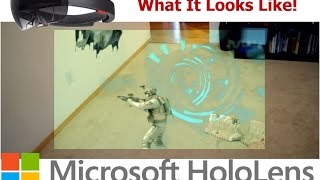 Microsoft HoloLens : What It Looks Like Inside And My Experience With It

It's now been two years since Microsoft started shipping its HoloLens headsets to developers and businesses, and we already know that the company is working on a successor. Harry Shum, executive vice president of Microsoft's Artificial Intelligence (AI) and Research group revealed last year that the

In addition to hardware improvements, Microsoft’s new HoloLens could also introduce some exciting software changes according to this new report:

This isn’t the first time we hear that Microsoft is working to adapt Windows 10 to new devices and scenarios. A couple of weeks ago, a previous report revealed that Microsoft’s new Composable Shell for Windows 10 devices would debut on the next-gen Surface Hub later this year.

It’s still not clear when Microsoft plans to announce its new HoloLens headset, though. In a recent blog post on LinkedIn, HoloLens inventor Alex Kipman shared that “we have some exciting work planned for 2018 that I can’t wait to share in the coming months.” The first HoloLens headset was unveiled back at Microsoft’s Build 2015 developer conference, and it remains to be seen if we could hear more about the new HoloLens during Build 2018 in May.