Microsoft’s Surface product line was one of the brighter spots in Microsoft’s FY16 Q2 earnings report. Thanks to the Surface Pro 4 and Surface Book, Microsoft booked $1.352 billion in sales for the quarter, doubling the previous period. On top of that, hybrids like the Surface Pro 4 and Book, which convert from a “notebook” to a tablet with the removal of an attached keyboard, are the only segment of tablets experiencing any sales growth right now.

According to Govini, the self-styled “leading business intelligence platform for companies that sell to the public sector,” Microsoft Surface is also gaining ground in the lucrative government procurement market. While Apple’s iPad has been and remains the leader in terms of tablet sales to government agencies, Microsoft is steadily gaining share. 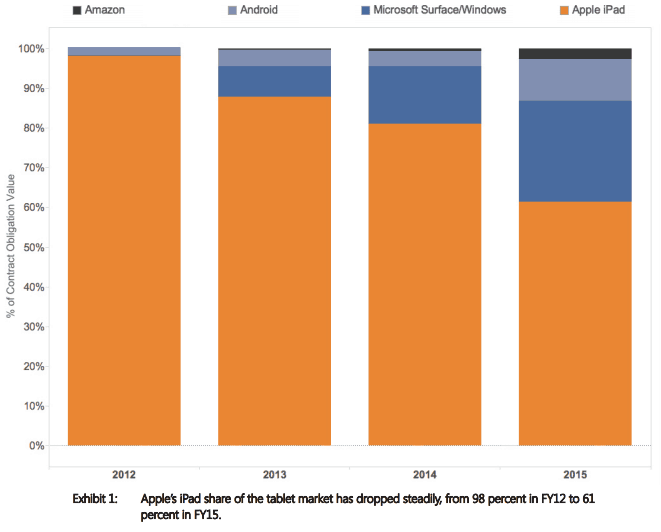 Government tablet sales don’t represent a huge business, due as Govini indicates to security concerns with tablets. However, that market is beginning to pick up, and while iOS remains the clear leader, Microsoft’s Surface line has taken over the second place position. That’s an impressive showing for being on the market for less than three years.

According to Govini, these are the most important takeaways from the study:

– The first-to-market may have initial success, but maintaining market leadership requires adapting the product to meet customer needs.
– Windows tablets have eaten into iPad’s market share by rapidly integrating into PC-based workflows and adapting to customer requirements.
– Mapping the install base horizontally across agencies is critical to defining the total addressable market, while drilling down within a specific agency allows for focused sales and business development efforts.
– While government agencies, especially DoD, have solicited solutions from Silicon Valley, commercial products must adapt to Federal needs where proven Microsoft operating platforms dominate when agencies focus on mobility and security.

The most interesting aspect identified here is the ability of Microsoft’s Surface line to enable PC-based workflows (presumably in a more portable fashion), which makes sense given the inherently more broad base of applications made possible by Windows 10 vs. iOS. Apple has benefited from being perceived as first to market (Microsoft’s earlier Tablet PC initiative having essentially died off before this study began). However, Microsoft’s focus on providing truly productive platforms will likely continue to pay dividends in industries like government where legacy  and more complex PC applications need to be supported.

The Surface line continues to demonstrate its value to keeping Microsoft relevant in a number of key markets. We’ll be looking forward to seeing Microsoft continue to gain ground in government, just as it is in the enterprise.