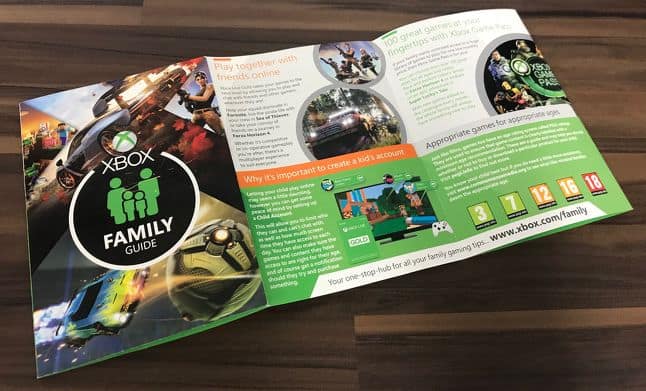 On the heels of a rather favorable NPD analyst report about the sales of the Xbox One X, it seems Microsoft is enticing shoppers in the UK and Ireleand regions who are intent on buying an Xbox this holiday season with an all new "Xbox Family Guide."

According to Harvey Eagle, Xbox director for UK & Ireleand explains how Microsoft wants family engagement and healthy digital living to beomce the messaginig  cornerstone of the Xbox One bying experience this year.

"We know speaking to families at this time of year is important so they're armed with the right information when considering purchasing a console."

The newly published Xbox Family Guide is the company's attempt at helping parents in the market for gaming consles and experiences for their children; educate and familiarize themselves with all that the Xbox One has to offer.

From child accounts to content restrictions, a new pamphlet will be distributed to 3rd party retailers in the UK and Ireland areas that include Gamestop, WH Smith and John Lewis, Smyths and GAME. Microsoft is encouraging its partners to hand out the Xbox Family Guide to parents who have either just bought an Xbox One or are interested in the console.

In addition to informing parents about the in's and out's of the console, Microsoft is also using the XFG as a sort of tutorial for a step-by-step setup process buyers can implement before their child unwraps their gifts. With most Xbox One's requiring monthly updates, encouraging parents to setup and go through the install process prior to gifting the device, just makes sense.

Despite physical hand outs being limited to UK and Ireland stores, anyone interested in the family benefits of the Xbox One can visit the Welcome to Xbox page for much of the same content.