Microsoft has been one of the few companies to champion humankind’s oldest productivity tool, the pen, in the age of touch-based input and beyond. The success of its Surface Pro line of pen-enabled 2-in-1s have spawned a resurgence of the digitizer in current PCs, and serves as an excellent confirmation for the company to stick to its pen enabled future vision, culminating in Windows Ink, Microsoft’s latest effort in integrating the pen into its ultimate operating system, Windows 10. Slides from WinHEC 2016 – Microsoft’s forum for Windows hardware engineers – uncovered by familiar Twitter user WalkingCat @h0x0d offers a clear picture of this effort, along with some interesting insights.

According to the slides, the number of pen enabled devices have doubled in 2015, and currently, more than 50% of all devices with pen support are running Windows 10. It’s not a coincident that this happens: the digitizer has only come back in style quite recently, led by Microsoft Surface devices. One other reason for pen users to welcome Windows 10 onto their devices might just be the great dedication Microsoft is showing towards supporting the input type. The Windows Ink platform is the latest and biggest news, building several useful pen-based interactions right into Windows itself, making a more compelling pen experience than ever before. While Windows Ink will only come in full form along with the Windows 10 Anniversary Update slated for later this year, users have had a glimpse of its power during Build 2016, and hardware makers apparently much sooner at WinHEC 2016. 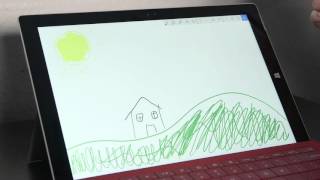 Microsoft has been one of the few companies to champion humankind's oldest productivity tool, the pen, in the age of touch-based input and beyond. The success of its Surface Pro line of pen-enabled 2-in-1s have spawned a resurgence of the digitizer in current PCs, and serves as an excellent confirma

While the slides reiterate on several features of Windows Ink like Ink Workspace, low latency ink rendering, and ease of integration into applications with just one line of code, the more interesting part is Microsoft’s guidelines for hardware makers to create the best ink experience on Windows. The company introduced a new protocol, called Microsoft Pen, for pen on Windows, along with a pen design guideline that offers two templates for makers. The template guidelines include instructions for Surface Pro 2 and lower’s 2-button pen with a tail eraser, or the Surface Pro 3 and up’s three-button pen, with a Bluetooth button at the tail. The separation is rather peculiar, given that Microsoft itself seems to have been able to combine the high points of both designs in the latest Surface Pro 4 pen, whose tail button doubles as an eraser and a Bluetooth button.

Besides the design template, Microsoft also showcases its input driver model for pen input, as well as a suggested pen validation method using what seems like robot arms, presumably to test the screen’s reaction to pen input. The ultimate solution, however, is the Microsoft Pen Program. Described as a “turnkey solution for Windows Ink compatibility”, the Program promises what sounds like a standard manufacturing process using Microsoft technologies that will produce “high quality, power-efficient and affordable pens.” More importantly, all devices and pen pairings that are part of the program, using the Microsoft Pen protocol, will work with interchangeably. This is a huge step forward for pen technology from the days of Wacom’s single-handed dominance when the pens for its drawing tablets would not work with other Wacom-based pen enabled devices.

Wacom is listed as one of the suppliers of Microsoft Pen, and also among the provider for its compatible touch controllers, not surprisingly, as the company is known to be working with Microsoft on a new “Universal Pen” for Windows. The “Dual Protocol” part, however, suggests that future Wacom Pens may support both Microsoft Pen – referred to as the “Universal Pen Framework” (UPF) – and Wacom’s own technology – called Digital Stationery Consortium (DSC). Microsoft promises a “long term strategic partnership” with Wacom in the slides, and it will be interesting to see how this duo will continue to revolutionize inking in the future. The next step for Wacom already sounds like a dream for pen users: 240Hz pen, 4096 level pressure curves and support for many kinds of touch panels. The tech is expected to come out in Q4 2016.