Edge Chromium continues to gain traction as the browser to use and one of the reasons for that is Microsoft's efforts to improve scrolling inside of Edge.  As an action, scrolling is one of the most common user interactions and bad scrolling can ruin any experience no matter how good the browser is.

What makes a good scrolling experience?  Microsoft suggests in their latest Windows Blog that regardless of the input method a user needs their scrolling experience to be fast and responsive and in this post, we will summarize how Microsoft's experiences have helped them understand how to improve the scrolling personality in Edge and some upcoming changes will improve performance and functionality.

Since the early Canary builds of Microsoft Edge, Microsoft says that they received more than 1,000 feedback items including a lot of constructive feedback on various aspects of scrolling that led Microsoft to focus heavily on scrolling personality and performance including changing how Edge Chromium works in Windows to better match Windows "personality."  Let's take a quick look at how those feedback items break down. 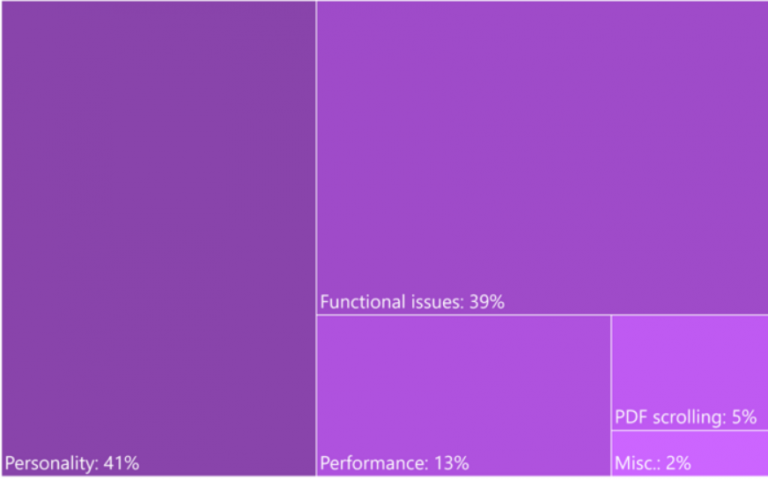 While the changes described above brought many of the most liked features to the new Edge Chromium, Microsoft also suggests that they are re-evaluating existing other scrolling behaviors that were less popular. For example, Microsoft's team looked at scroll chaining (used in Microsoft Edge) compared to scroll latching (Chromium), and Microsoft noted that more than 97% of users preferred the behavior of scrolling latching.

A second example is Fling Boosting.  Fling Boosting is a feature is already included in Chromium and allows a user to increase the velocity of moving up and down by flinging multiple times until they get to the top or bottom of the page.  Previously, Microsoft Edge introduced its own concept, Quick Flick, where a user used a fast flick to move up or down, but the user studies found that most users couldn't accurately reproduce the action, so they won't replace Fling Boosting with that action.

Microsoft's goal is to bring the best of Microsoft Edge and Chromium together to create the best browser experience available in the market.   While I don't often think of scrolling in this amount of detail, I appreciate that Microsoft is listening to their users and looking to continually improve their browser.    To learn more,  check out OnMSFT or get updates from the Windows Blog.