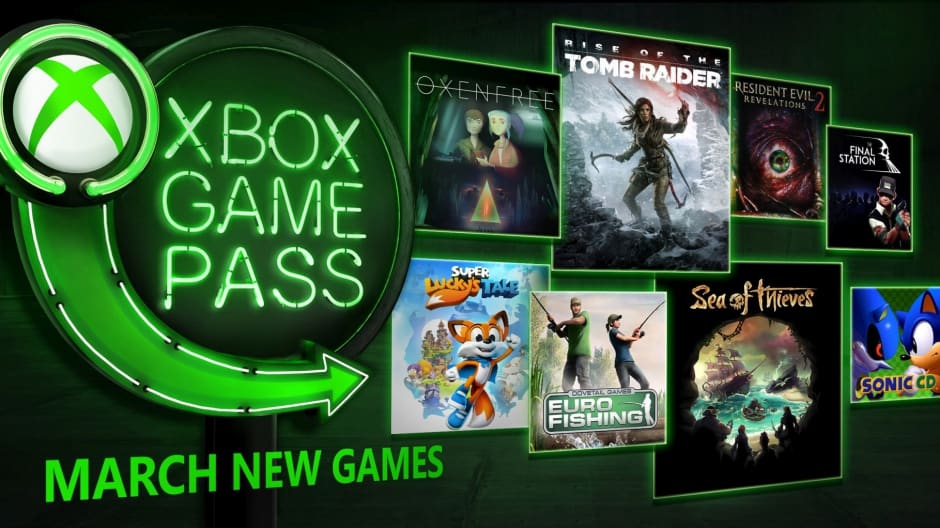 Eight new Xbox games will be added to the Xbox Games Pass catalog next month, including the much-anticipated Xbox/Windows 10 exclusive Sea of Thieves. The pirate adventure game will be available for subscribers on on March 20, marking Microsoft’s new commitment to bring all future Microsoft Studios to Xbox Games Pass on launch day.

Super Lucky’s Tale, the 3D platformer video game also released as an Xbox/Windows 10 exclusive last Fall will also join the Xbox Games Pass catalog next month. This title was released on the same day as Forza Motorsport 7, and it’s fair to say that it didn’t get the same level of attention. Adding the game to Xbox Game Pass may finally give it a much bigger audience.

Another great addition to Xbox Games Pass is Rise of the Tomb Raider, the critically-acclaimed sequel to the 2013 reboot. The game was recently enhanced for the Xbox One X with three different visual modes, including a high frame mode delivering that 60 FPS sweet spot.

Four other games complete the March Xbox Games Pass update: There is the supernatural thriller Oxenfree, the side-scrolling shooter The Final Station, fishing simulator Euro Fishing and the Xbox 360 oldie Sonic CD. These are really cool additions overall, and if you have yet to try Xbox Games Pass we really invite you to sign up for the 14-days free trial.

Dev reportedly gets Windows 10 on ARM running on Lumia device