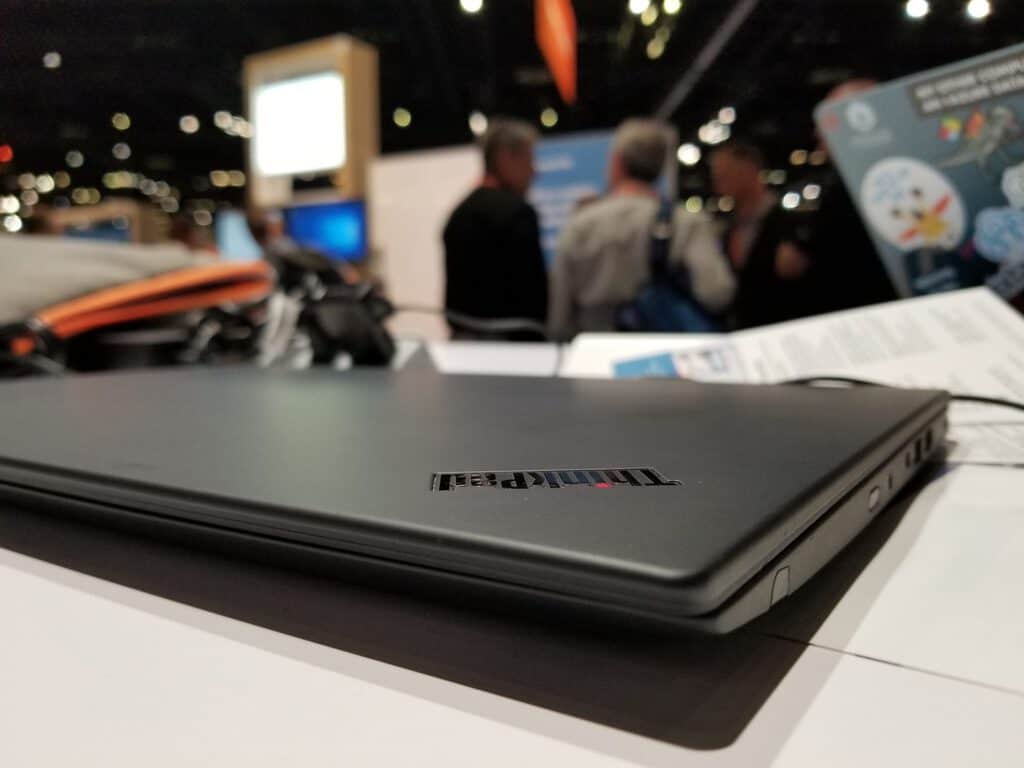 The Lenovo ThinkPad X1 Carbon 6th Gen laptop has me at a loss for negative things to say. Usually, when I review a device there are at least a handful of tweaks or wishes I would apply to a device to shoehorn it into my workflow. 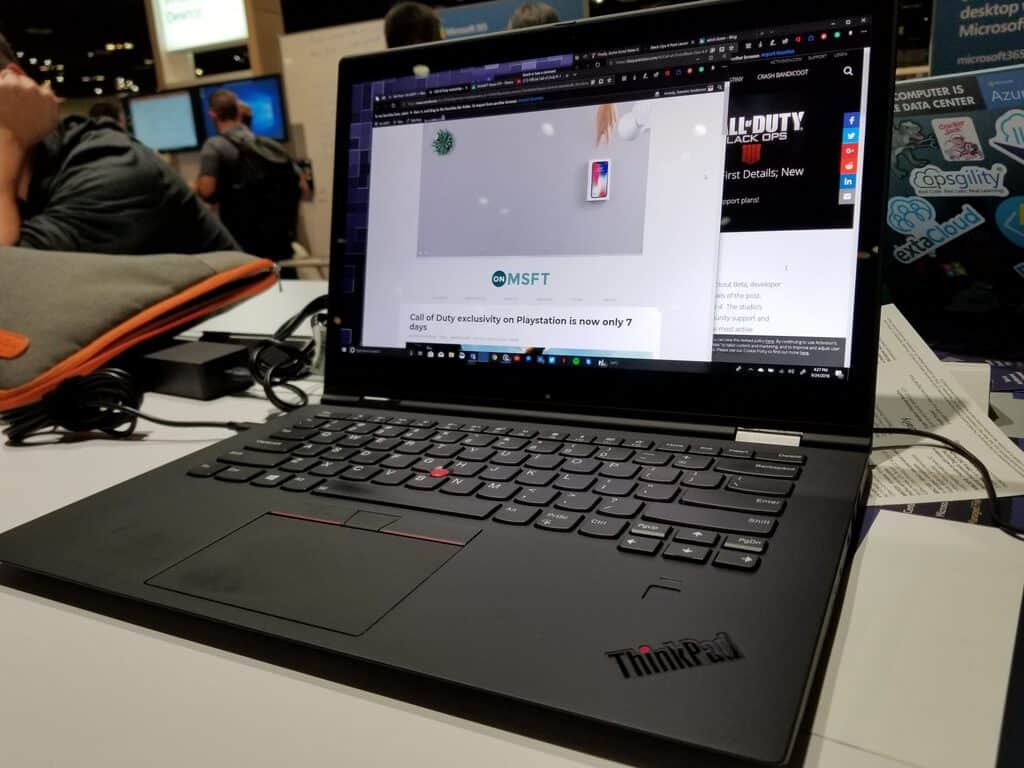 Storage
Up to 1 TB PCIe SSD

Camera
HD 720p with ThinkShutter
Optional: IR camera - required for facial recognition. ThinkShutter is not available on configurations with the IR Camera.

Battery
Up to 15 hours*, integrated Li-ion 57 Whr with RapidCharge technology

Lenovo is making it harder and harder for me to find flaws with their laptop offerings. Perhaps, my prioritization of a functional laptop may have shifted; I try to no longer fetishize the devices as I used to but instead look to see how they get things done.

With the Lenovo Yoga X1 Carbon (6th), it gets most things done well.

Despite an i7 with 16GB of RAM and boosted memory with LPDDR3 the X1 seemed to throttle my work performance during more graphically intense workloads. I normally live in Excel, Bing Ads, and Google AdWords via the browser, so for most of my tasks, the X1 performed exceptionally.

However, this quarter, I needed to create some Display Ad content that needed to be distributed across multiple campaigns, as well as some presentations; my workload took me into the world of GIMP 2.0, Google AdWords Editor and PowerPoint simultaneously. When all programs were open and running, there was some noticeable lag, but not enough to cripple my workflow.

You would think I would just succumb to the idea that Windows PCs regularly fall short of their battery claims, and move on. However, I find it still an issue that I'm routinely falling short of Lenovo's 15-hour claims.

I understand that running Chrome, GIMP, Teams, and Skype in the background will eat away at any battery, but I would like to make it through a regular work day (meetings included) without having to plug in. 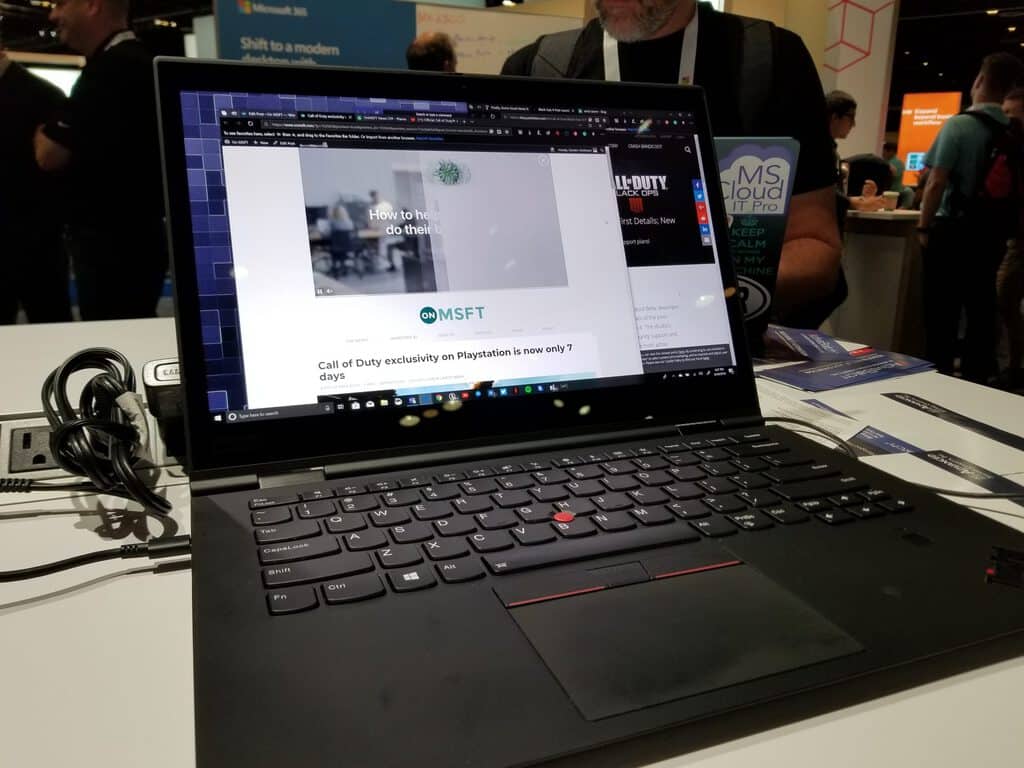 Like I said at the top, I had to be nitpicky just to have some content for this section. While I understand the brand significance of the ThinkPad product design, I would love to see a departure from the carbon fiber soft-touch black esthetic to something a bit more premium, at least for the X1 line. Perhaps, the design has something to do with its military-grade specifications, but as far as I can tell, these devices are designed with IT and executives in mind. With that being said, a design closer to the Surface Laptop or Matebook X would compliment this device nicely, in my opinion.

The list could go on and on, from the Dolby Vision display to the spill proof keyboard arrangement, but I'll just highlight the few things that stood out to me during my more mundane work/life usage.

I'll admit, I was drinking a bit of the Microsoft Kool-Aid when the company eschewed the notion of USB-C being widely adopted in the next year or so. However, after using the X1 Carbon that did away with the traditional proprietary charging port for a USB-C connector, I find that I use that single connector and charger interchangeably with most of my new devices.

I also recently purchased a USB-C enabled portable hard drive and the transfer rate is ridiculous. I used to like to open up the dialog box to see the full details of my file transfers but they're happening so quickly now, that I don't have time to move my mouse to the dialog box by the time it's done transferring data. On this one, Microsoft was wrong, the benefit of Thunderbolt USB-C is immediate and should be standard on most electronic devices. 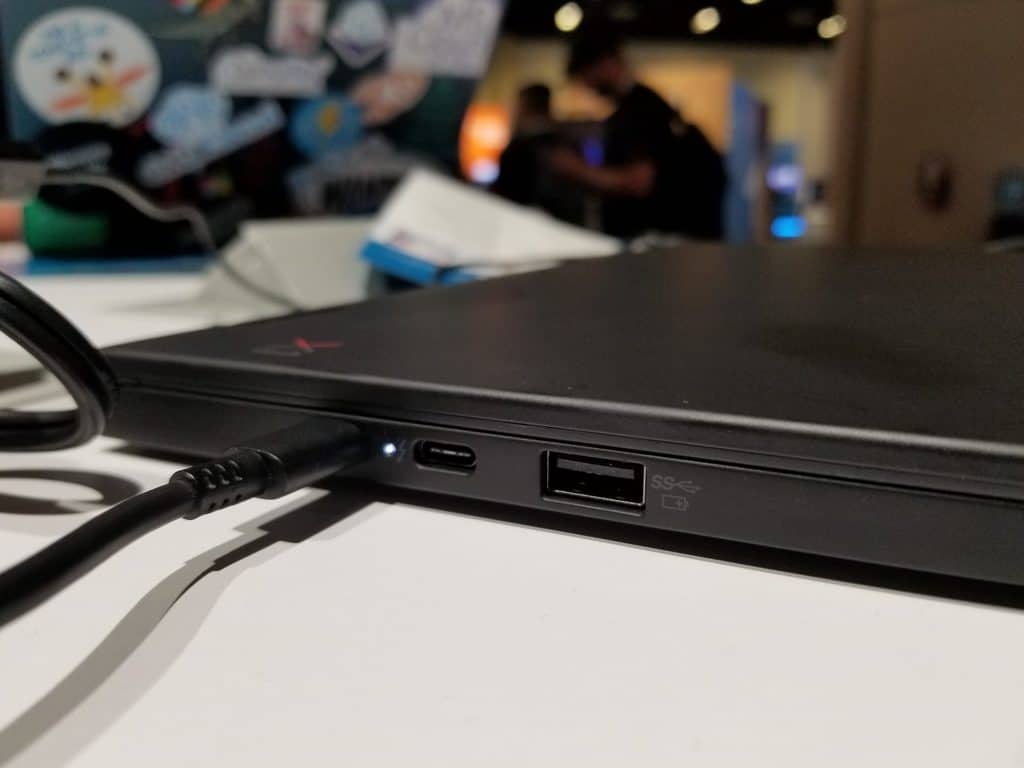 With the X1 falling short of its 11-hour claim daily, I was able to fully test the company's claims of 0 to 80% in 60 minutes, and you know what, it's true. The X1 Carbon charged faster than my Note 8 using its proprietary quick charger and that's what help mitigate my annoyance of the X1's battery shortcomings. While I couldn't fully feel comfortable leaving the house without the charger, it helped that I didn't need to keep my laptop leashed to it for more than an hour a day, for most days.

I'm not sure if this is standard on all X1 Carbon's but my device came equipped with both an e-Sim and micro SD reader. While I never really tested the e-Sim port, the micro SD reader became a huge benefit in using the device for both work and personal use.

Not only did it add extra storage to the device in a sleek discretional way, but it also allowed me to save personal files to my encrypted micro SD that weren't immediately accessible to anyone using my device. I feel this is another thing that should become standard on devices. With more people buying smartphones with upgradable storage, I think a growing number of people grasp the concept of partitioned and expandable storage. 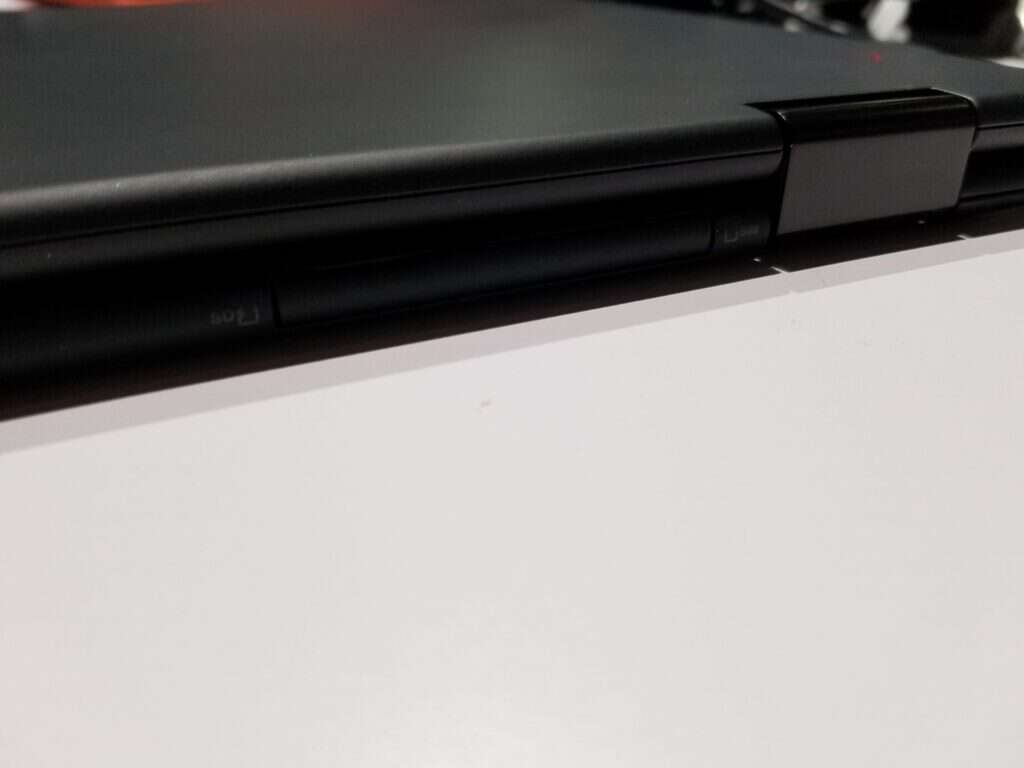 I say it in every Lenovo review, but the pre-installed Lenovo Vantage app is a great, and dare I say necessary app. While it directs users to two different places for updates, it's a great resource for specific driver and hardware updates that don't otherwise get covered during Windows 10 updates. The Lenovo Vantage app is the one bloatware app that I would recommend all users invest time in using.

The X1 Carbon touts its Dolby Vision high-dynamic-range [HDR] screen as well as its FHD display options and the model I had made excellent use of the Dolby Vision. It did punch up the colors a bit, similar to how Samsung does its Galaxy phones, in my opinion, but it was a nice addition to the laptop. The calibration of the screen is also something that can be adjusted using the Lenovo Vantage app, by the way. 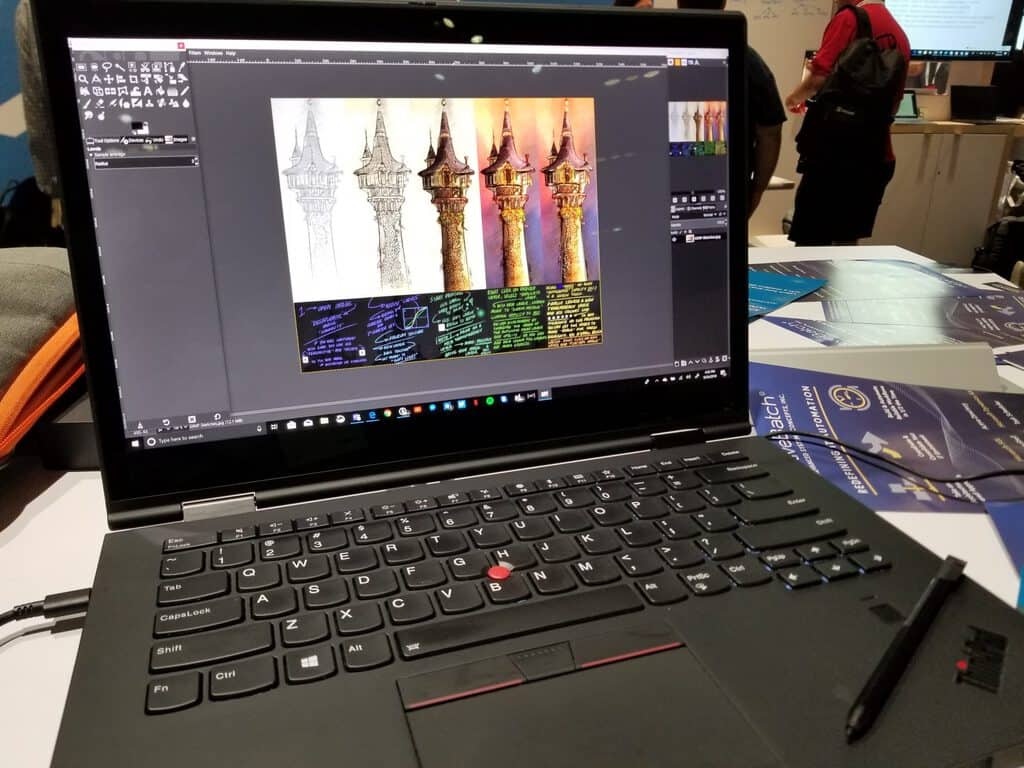 The X1 Carbon also makes use of Dolby Audio Premium and Dolby Atmos, however, as I usually listen to podcasts using my headphones at work, I didn't get the full benefit of Dolby through the integrated speakers. Also, Dolby Atmos appears to be a subscription/purchased occasion, so I missed out on that benefit as well.

I made a concerted effort to use the fingerprint scanner as my only login option and on this device, it read pretty quickly. There were a handful of times I had to reposition my finger or enter my pin after a few incorrect swipes, but overall it was nice to use. I would much prefer the camera unlock option similar to the Surface Pro or Surface Laptop, but ironically I used the ThinkShutter (webcam cover) about 80% of the time on this device.

The 360 hinges and its 2-in-1 nature came in handy during meetings. Instead of tracking in a laptop and notebook, I simply took my X1 Carbon. The built-in pen dock was also a godsend. Similar to the Galaxy Note series, Lenovo managed to solve the awkward pen storage issues it has with its other line of laptops. 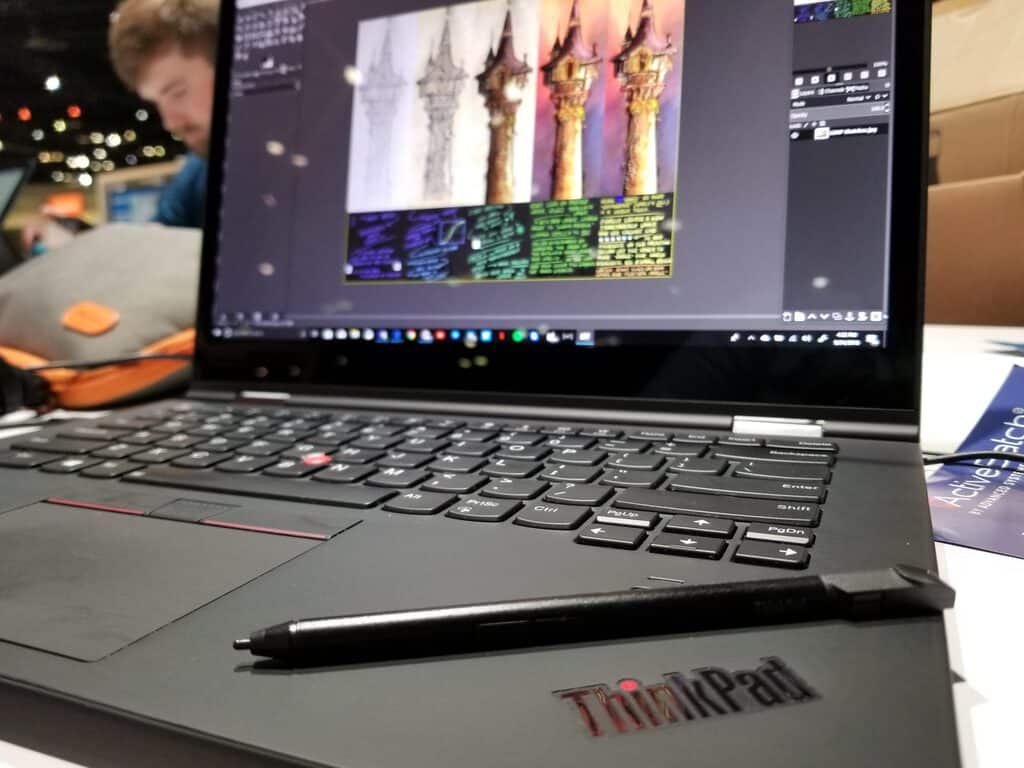 The X1 Carbon (6th) is a great device with few if any flaws for the average IT Pro or executive. It 's a bit on the pricey side, so I don't see this device being widely distributed throughout the office, but for the traveling manager, executive or IT Pro, this devices holds its own. I took it with me to Microsoft Ignite and with its super light body and ideal 14" screen, it travels exceptionally well.

I know it's not a saying but it should be; the sixth times a charm.

Ignite 2018: Outlook Mobile on iOS to get a new look