The Lenovo's P line up are designed to be "mobile" workstations that focus on more on power and performance and less aesthetics and portability and the P15 (Gen2) continues that trend.

With the look and feel of the P15 (Gen2) remaining relatively untouched from last year's model, I'll keep this section brief.

From a distance, the ThinkPad P15 (Gen2) looks like any other ThinkPad with the traditional carbon fiber casing, tapered lid, matte black color scheme and minimalistic top cornered branding design.

However, upon closer inspection, the P15 looks and definitely feels more like two normal ThinkPad's stacked on top of one another with the device measuring at 13.9 x 9.25 inches.

On top of the size, the P15 (Gen2) comes in at 6.32 pounds and somehow outweighing its predecessor from last year as well as other seemingly less portable notebooks such as the HP ZBook Fury 15 G7 and Studio 15 G8.

Fortunately, the trade off in weight brings ports galore with the P15 (Gen2) housing two faster Thunderbolt 4 ports and the latest in HDMI technology with a 2.1 output connector as well as 2 USB-C 3.2 Gen 2 at 10 Gb/s, ethernet port, a 200MB/s smart card reader, USB-A 3.2 Gen 1 and traditional Kensington lock.

Cracking open the lid, you're presented with a 16:9 1080p panel that pushes roughly 500 nits of brightness and is surrounded by a 2017 bezel arrangement. The bezels on the screen look like they take up at least of the 1/3 of screens physical real estate, so be prepared to use one of those Thunderbolt 4 ports to connect a much nicer and larger external monitor.

The P15 (Gen2) does manage to outperform its predecessor when it comes to pushing up the brightness level and increasing the contrast ratios, so if you plan to use it as your main monitor, there is that improvement.

The keys and keyboard deck are just as good as any other ThinkPad device with great 1.8 mm key travel, spacing (full number pad) and responsiveness. The same can be said about trackpads and device pointer.

I rarely used the P15 for any entertainment purposes, but videos looked sharp enough, colors as vibrant as a matte display can push and the sound was, well, coming from not so impressive computer speakers.

Now on to the good stuff.

I've moved the P15 (Gen2) only three times during my testing, once from its box to the couch and then to my office. At just over six pounds, the P15 felt like more of flattened tower PC than the previable laptop, but with that said, it outperformed my dedicated tower PC at work, by miles.

This particular configuration of the P15 was meant to be parried with Lenovo's ThinkReality A3 headset and AR platform, which I'll talk about in another review. 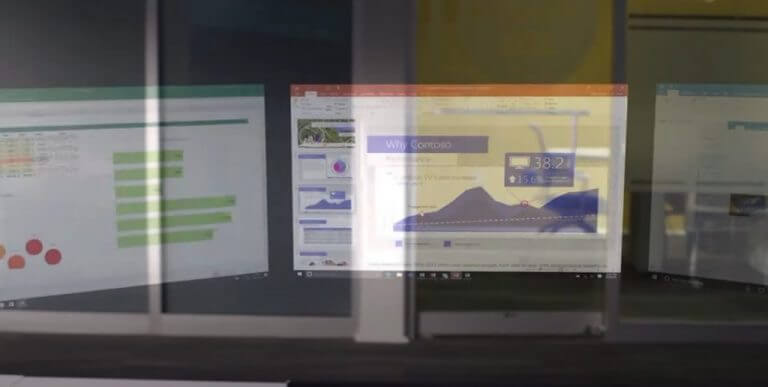 For anyone not looking to develop AR apps and services, the P15 (Gen2) at this configuration, will have plenty of headroom for power and making use of creativity workflows.

The ThinkPad's Tiger Lake's 45-watt CPU paired with NVIDIA's beastly A-series flew through everything I threw at it, from 4K video editing in both Adobe Premier to macros-laden statistical analysis Excel docs.

I wish I knew more about linear regression models, K-Means Clustering and logistic regression algorithms to really push the CPU and RAM of the Lenovo ThinkPad P15 (Gen2) but sadly, I don't so you'll have to settle for some relatively basic competitive bench markings. 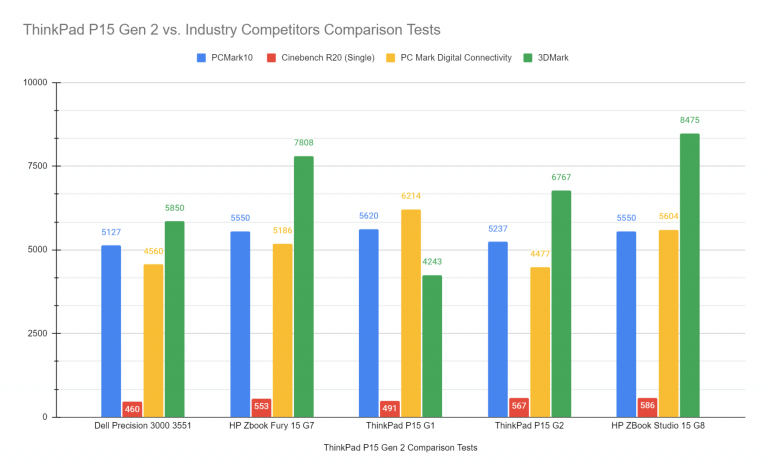 However, thanks to a previous Anandtech article I was able to find some more specific scientific analysis tests to pit this ThinkPad P15 against the Legion 7i I recently reviewed with its more consumer grade GPU and here are the results. For those of you unfamiliar with the test names, here is a brief breakdown: 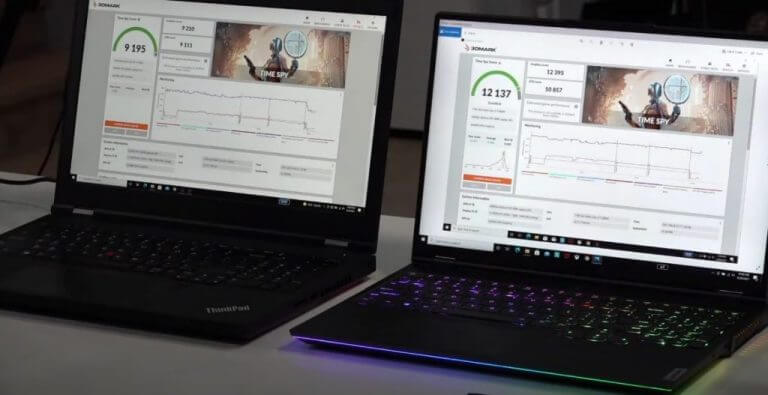 For those of you wondering about the more casual gaming performance of the P15, here is a basic 3Mark Time Spy Benchmark comparison with Lenovo's Legion 5 Pro which pairs a Ryzen 7 5800H with NVIDIA's RTX 3070.

Just keep in mind the GPUs in the P15 are Quadro by design and not intended for gaming, but they can keep up with a fair number of first-person shooters and more graphically intense games, just don't expect them to perform at great resolution nor come in at the same low-end price as more dedicated gaming rigs.

Regardless, all this performance renders the P15 a socket jockey especially under heavy loadouts. Most other laptops I tested against the P15 lasted a few hours longer, with the closest coming in about three hours longer than the P15.

When running a basic battery test, the P15 lasted about 208 minutes or roughly 3 hours. 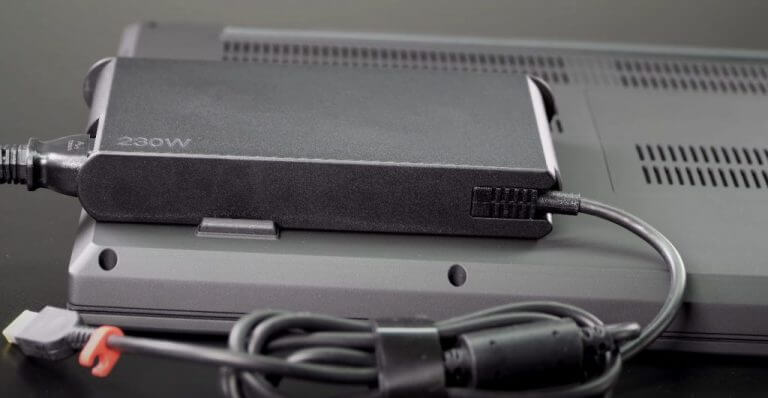 In addition to competitively poor battery performance, the P15 (Gen2) gets really loud and really hot almost all the time. At its loudest the P15 (Gen2) can reach sounds of 44.6 dB(a) noise levels which can drown out people speaking near it. The noise is often a pain point when on conference calls, phone calls or in-person meetings as its ramps up for the oddest reasons.

Regarding heat, the P15 (Gen2) can get as hot as (140 F) or 60 C, and that heat is dispersed at the top of the deck near the speakers and function keys, but since it's mostly a stationary device, I suppose it's a moot point. Just make sure to keep the P15 (Gen2) somewhere the air, noise and heat won't be a constant problem.

The P15 (Gen2) is most likely not the device for you, unless you work in research, medical or engineering fields, much of the power and performance will go to waste. Even for the moderately difficult video editing tasks I attempted to trip up the P15 with, the machine handled disregarded them like a wet fart in a hurricane.

However, if you don't mind an average looking ThinkPad that will sit on a desk for much of its time, and you have close to $3,000 to spend on "do everything" -and then some kind of device, the P15 may be much preferable to a mini-PC or desktop tower.

I normally don't test devices with this much kick, but it was fun and a reminder of just how many niches use-cases Windows OEMs must account for.

For anyone who's looking to upgrade from their current scientific-focused PC, just keep in mind the P15 improved the cooling from last year (relatively speaking), upgrading the device is much more accessible, both the CPU and GPU have improved, and it keeps all the same ports you're used to.