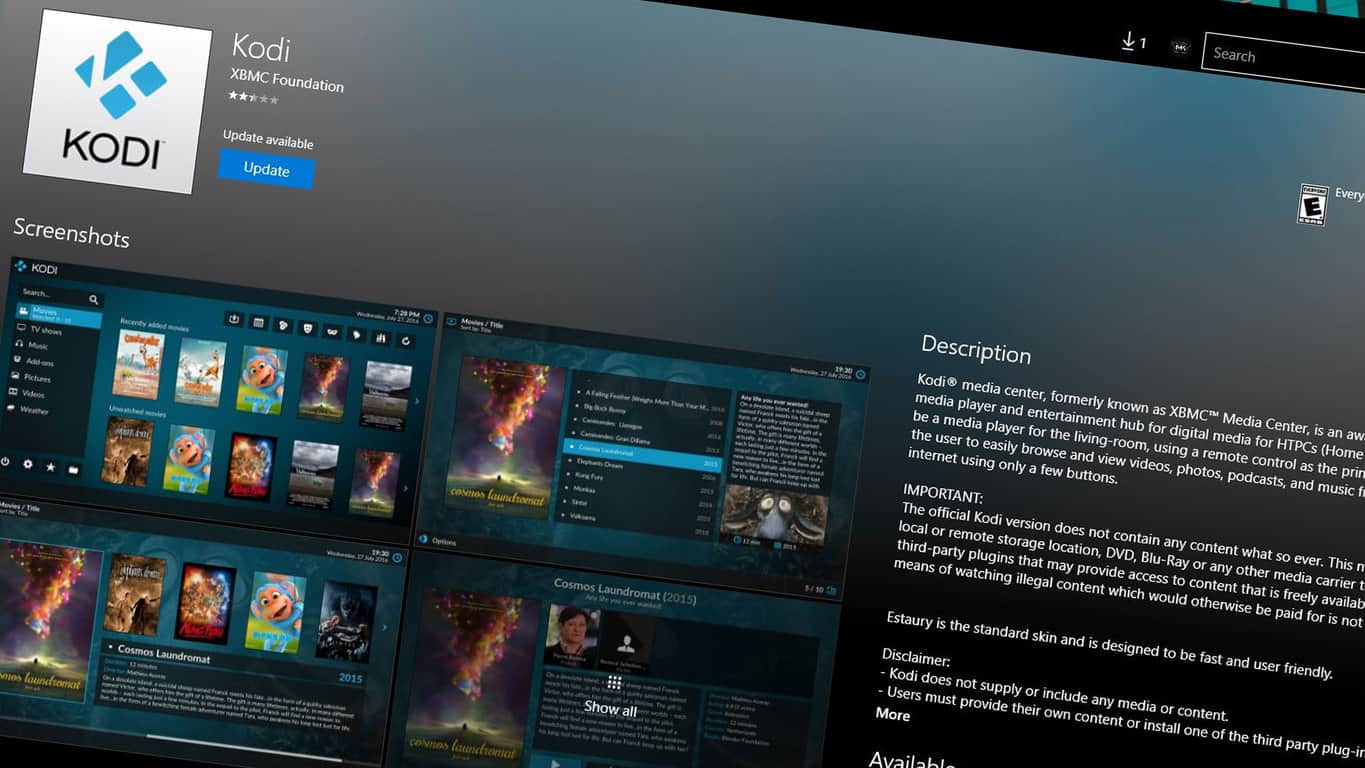 The media player, Kodi, has just been upgraded to the new Universal Windows Platform (UWP) app format and can now be found in the Windows Store for installation on Windows 10 PCs. The app is designed for large screens, such as a television set, and can be used for consuming a variety of media from movies and music to podcasts and images.

Here's the official app description for Kodi in the Windows Store:

Kodi media center, formerly known as XBMC Media Center, is an award-winning free and open source cross-platform software media player and entertainment hub for digital media for HTPCs (Home theater PCs). It uses a 10-foot user interface designed to be a media player for the living-room, using a remote control as the primary input device. Its graphical user interface (GUI) allows the user to easily browse and view videos, photos, podcasts, and music from a harddrive, optical disc, local network, and the internet using only a few buttons.

In an official post on the Kodi website, the developers reveal that they used Microsoft’s new Desktop Bridge initiative to convert the traditional Desktop app into the modern UWP app supported by the Windows 10 operating system and its numerous features. What’s particularly interesting is that it appears that the Kodi developers actually helped Microsoft develop the Desktop Bridge app conversion process.

“We actively worked together with the Microsoft developers to further improve this Desktop App Converter and the process involved around it which should make it easier for other developers to convert applications in the future,” a Kodi developer by the name of Martijin reveals. “In Desktop Bridge there are some minors restrictions and with our big code cleanup we hit this restriction. With the help of the Microsoft representative and developers we identified what the problem was and with some code changes on our side we were back in business again. All we had to do now was wait for the final launch date when this became available for the wider public. We even received some helpful pointers to fix a problem we were facing and didn’t really know where to start. So we would certainly like to thank them for their help and hopefully work some more in the future.”

Some of the benefits of this format change mentioned in the announcement post are the automatic app updates that users will now receive, the added ability for the developers to receive crash logs from the app, and the way the new app uses the same user data as the original app.

Despite being a UWP app, Kodi is still only usable on Windows 10 PCs, a result of using the Desktop Bridge conversion process. The developers would like to eventually get it running on smartphones running Windows 10 Mobile however and eventually the Xbox One console as well. “Sadly Desktop Bridge doesn’t make it possible to run Kodi on anything else but a Windows 10 desktop computer or Surface,” Martijin explains. “Getting Kodi running as a true UWP app which would allow to install on other devices is still a long way to go and requires quite a few changes before that becomes a possibility. Though the step just made is certainly one in the right direction and we’ll certainly try to get there eventually as making the circle back to the XBOX would complete our journey where it all started.”

Are you a Kodi user? Would you recommend it to other Windows 10 device owners? Let us know in the comments below. Dominos Pizza is giving away Forza Horizon 3 DLC in Australia