July Xbox One Update now rolling out, complete with FastStart, Groups, and more - OnMSFT.com Skip to content
We're hedging our bets! You can now follow OnMSFT.com on Mastadon or Tumblr! 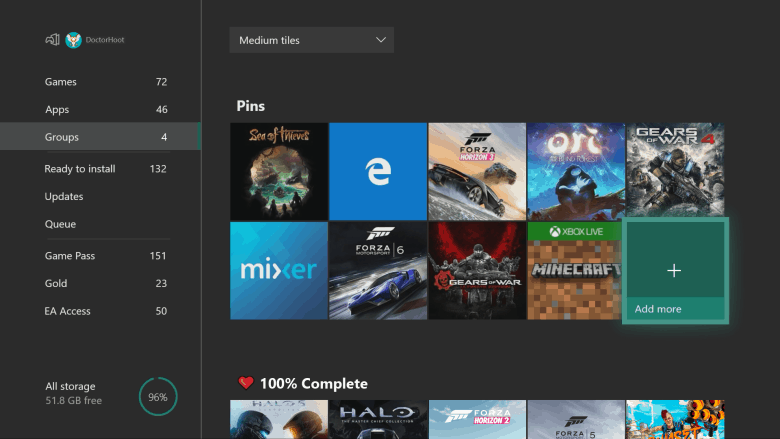 Microsoft's Major Nelson today has announced that the July Xbox Update is now rolling out to users across the world. This update was previously tested with Xbox Insiders last month and comes with FastStart on select games, the Groups feature in Games and Apps, and more. Here's what you need to know before installing on your Xbox One device.

Originally announced at E3, FastStart is a feature which allows you to quickly start playing the games you've just downloaded. The feature is only available on select Xbox Game Pass titles on the Xbox Store and is powered by machine learning. FastStart prioritizes the files in games which need to be downloaded first, Microsoft says you can expect for FastStart to expand to more games in more languages over the next few months.

Groups is an enhancement to Xbox's Pins feature that allows you to create different collections of any of the items under Games and Apps. You can assign names, organize and order the items in Groups, and you can sync them with your Microsoft Account across all your Xbox Consoles. Your groups will appear under My Games and Apps, in Home, and in the Guide.

With the July Update, Microsoft is making it easier to search on your Xbox. You can now press the Y button anywhere on the dashboard to bring up the search box and look for Settings, Games, or products in the store.

Microsoft is making multiple improvements for Mixer in the July Update. They've updated the Mixer Share controller option on the web, added multi-touch support for Mixer Share on touch devices, and added a channel leaderboard for viewers who've contributed to a channel during Share Controller sessions.

Additionally, Mixer streamers can now go full-screen with their webcam when broadcasting. This mode will automatically mute audio in the game, and best works with the webcams seen below:

This update may not be as major as others from the past, but the arrival of Groups and FastStart is very appreciated. Skip Ahead Xbox Insiders, meanwhile, are now on the Redstone 5 builds, so the development of the next version of the Xbox OS is already underway.

If your Xbox is set to automatically receive updates, it should be downloading now. In the event that you've set your Xbox to manually download updates, you can head to  Settings > All Settings > System > Updates > Update console to download now.

Microsoft Rewards app for Xbox One is now generally available