Still, Intel justifies the generational shift by the fact that these first 8th gen processors delivers "up to 40 percent greater productivity than 7th Gen processors and 2X more productivity vs. comparable 5-year-old processors." These performance improvements are the result of these processors supporting up to four cores and eight threads, a first for the company's U-series of mobile processors.  "We’ve been able to do all of this without compromising battery life," explained Intel's SVP and General Manager of Client Computing Group Gregory Bryant. "In fact, you will be able to get up to 10 hours of 4K UHD local video playback on a single charge." 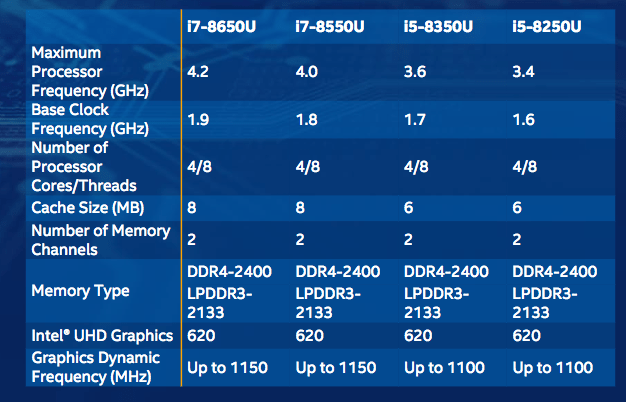 The first new devices from OEMs featuring these new 8th gen chips will launch in September, and Intel will launch its consumer desktop processors in the Fall. The company will share more details about its 8th gen family today at 8AM on Facebook, and we may learn more about the company's upcoming Coffee Lake (14nm) and Ice Lake (10nm) architectures.