Microsoft’s [email protected] program, which allows developers to self-publish games on its Xbox One and Windows 10 platforms, has just crossed an important new milestone. 1,000 games have now been released through the program since its launch back in 2014, and that represents over four billion hours of gameplay and more than a billion dollars in digital revenue.

“Over these past five years, we’ve seen the releases of incredible titles across every single genre imaginable – and lots of games we never could have imagined when we got started,” wrote Chris Charla, Senior Director of [email protected] on Xbox Wire. “We’re stoked that [email protected] is continuing to offer developers a place to share their stories in a meaningful way, helping to increase independent game discoverability and shaping Xbox One and Windows 10 as platforms that anyone can make games on and create with.” 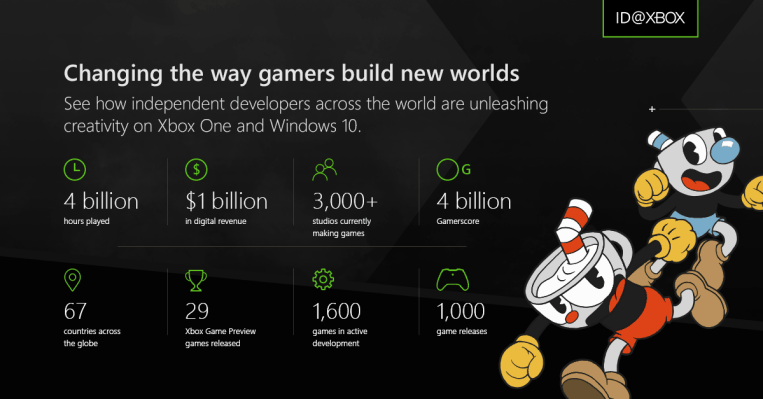 Some of the most popular [email protected] titles include the vintage-looking run and gun game Cuphead, the puzzle-platformer Inside, or the farming simulation game Stardew Valley. As of today, the [email protected] program includes over 3,000 game studios across the world, and more than 1,600 games are currently in development. “We’re continuing to celebrate this momentum into the future and bring even more rad experiences to players with upcoming titles like Slow Bros.’s Harold Halibut, Capybara Games’ Below, Aurora 44’s Ashen, Black Desert from Pearl Abyss and Sable from Shedworks,” said Charla.