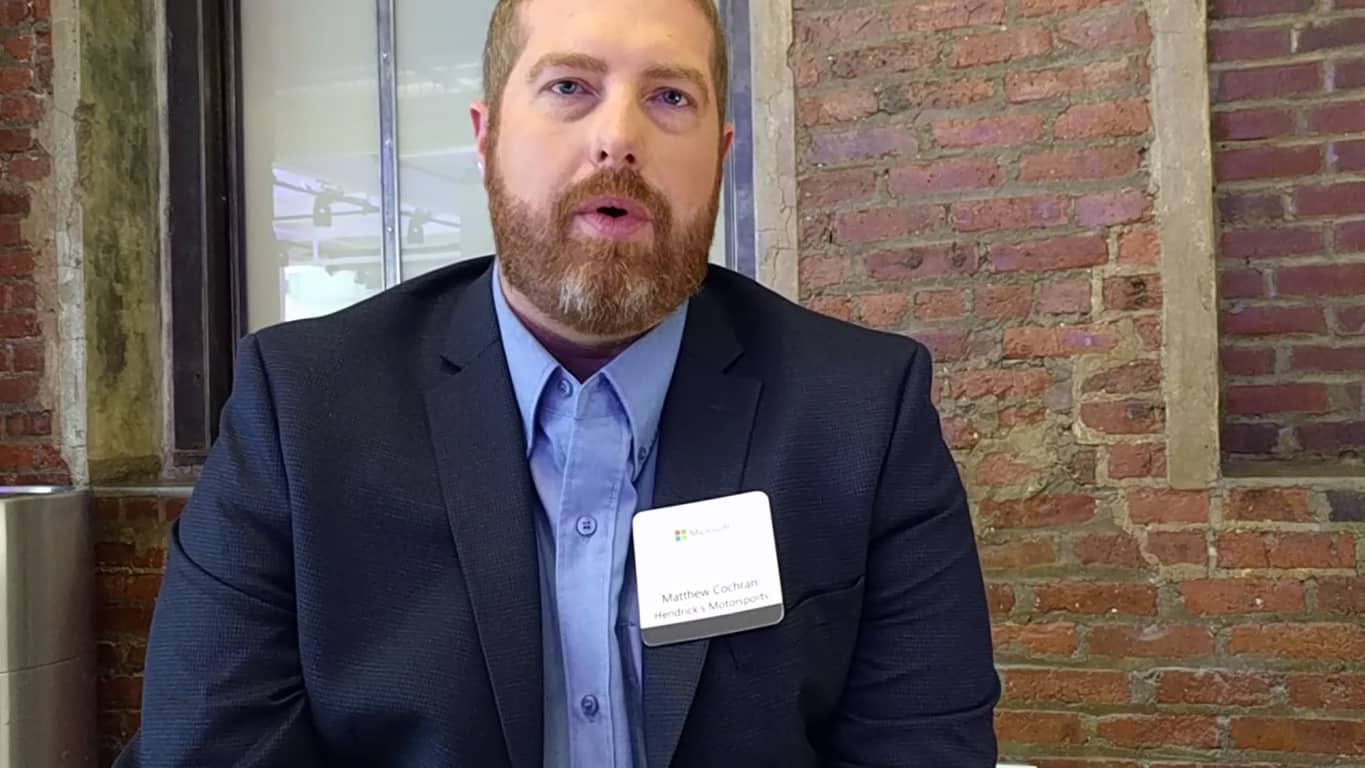 In the always fast-paced sport of NASCAR, where seconds on the stopwatch can be the difference between finishing first or third, technology has become ever so more important to all racing teams. So it was fitting to see Matthew Cochran, an IT Manager at NASCAR's Hendrick Motorsports, make an appearance during Microsoft's November 2nd event.

While Matthew appeared briefly on stage to discuss Microsoft Teams, I had the opportunity to sit down with him following the morning keynote and briefly discuss how Microsoft Teams, and Windows 10, are being used at Hendrick Motorsports.

How is Windows 10 used at Hendrick Motorsports?

To begin, I asked Matthew how Windows 10 is used at Hendrick Motorsports, home to NASCAR Champions such as Jimmie Johnson, Jeff Gordon, and current Sunoco Rookie of the year contender Chase Elliot. Matthew detailed that Windows 10 is a great operating system for the NASCAR team to deploy and standardize across the racing team. He even described the evolution of how Windows technology,  touchscreen devices, and the UWP are used at the team.

"Before [Windows 10] we were pretty much Windows 7 Professional, and then you take a look at the other devices in the mobile workplace when we're actually at the track, we're really relying on touch screen devices such as Surface and various tablets from Panasonic. Windows 10 allowed us to focus all that into one OS that was always updated. Now [with Windows 10] we can develop one application and push that through the Windows Store for Business. It makes our interfaces a lot smoother, it's very intuitive, it stays updated, it's very easy."

How can Microsoft Teams be used at Hendrick Motorsports?

As we have covered in the past, Microsoft Teams is Microsoft's new cross-application collaboration software. The software competes with Slack, aims to be the new hub for teamwork, and has access to SharePoint, OneNote, and Skype for Business, and all of Office 365 while in one secure space. Matthew mentioned several of these Microsoft Teams features which are useful to a NASCAR team such as Hendrick Motorsports, and how Microsoft Teams is great for security, privacy, and speed.

"For us the persistent chat functionality is key especially during the actual race event. That way in case there is any disconnection from a race engineer standpoint, they can see once they have reconnected to the network anything that has transpired since they were away. Never again do you miss a piece of information. It's all encrypted, we're very confident it's secure... So now [with Teams] the guys don't have to have four or five different applications open collection all their data. That rich integration is key, and it allows us to control the environment and make sure it's secure."

How does being partners with Microsoft give a competitive advantage over the other teams in NASCAR?

In NASCAR, the sport is constantly changing. With new technologies being used across the sport on pit road for officiating, and inspections, I was curious as to what competitive advantages Microsoft technologies have offered Hendrick Motorsports.

"We look at where the sport is today... The sport has really changed to a data driven sport, and so the competitive edges and really into the future we believe will be on how quickly you can consume data and make the intelligent decisions on that data. Microsoft and the Azure platform has allowed us to escalate very quickly and be very agile with the developments of big data analytics and machine learning."

Hendrick Motorsports, founded by Rick Hendrick, is based out of Charlotte, North Carolina. Since 1984, Hendrick Motorsports has earned a record 11 car owner championships in NASCAR’s premier division, the Sprint Cup Series. You can learn more about the team by visiting their website.