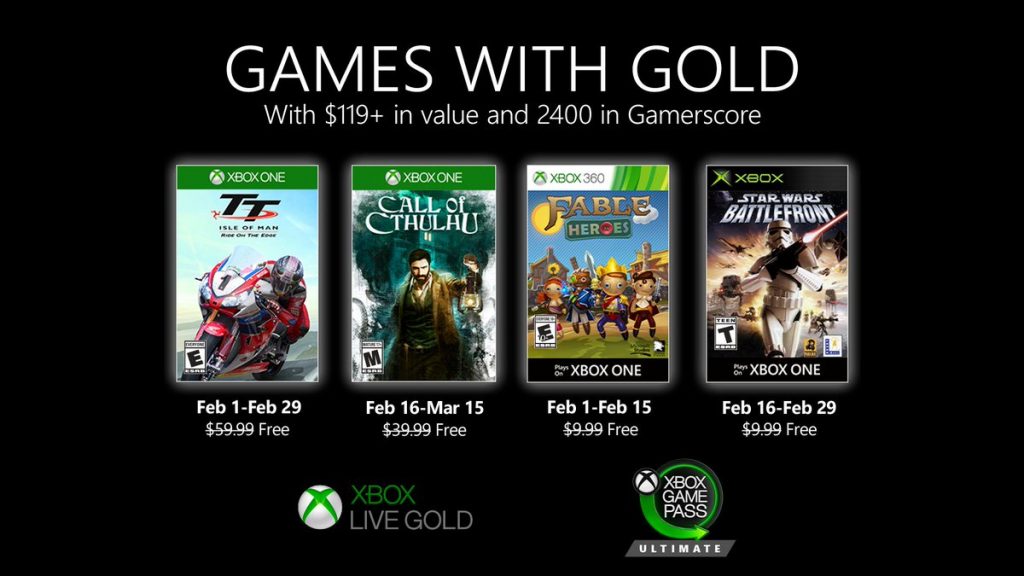 Microsoft has announced its Games with Gold titles to be available in February. As always, users will be able to obtain two Xbox One titles that will continue be playable with an Xbox Live Gold or Game Pass Ultimate subscription, as well as two games from its previous generation titles that can be kept forever.

Beginning February 1 until the end of the month, Gold subscribers will be able to download TT Isle of Man, a rather pricey $72 motorcycle racing game for Xbox One, completely free. Additionally for the first half of the month, Gold members on both Xbox One and Xbox 360 can download Fable Heroes, which normally costs $9.99, for free. On February 15, Xbox One owners subscribed to Gold will also be able to download Call of Cthulhu, a horror survival RPG based off of a short story of the same name, will also be free until the middle of March. And for the last two weeks of February, Star Wars Battlefront for the classic Xbox will also be available for free. Those who haven’t checked out this month’s Games with Gold titles can still download Styx Shards of Darkness, Batman: the Telltale Series, and Lego Star Wars II before the end of the month.

Which games are you excited for next month? Feel free to sound off in the comments.

Want to try Surface Duo? Here's how to get the Surface Duo emulator running on your Windows 10 PC