Here is how Bing Ads fights against malicious advertisements

Most people who are particularly savvy with computers don’t need to think about malicious advertisements very often. After being a frequent internet user for so many years, one develops a certain sixth sense that sets off a “don’t click” alarm that identifies scams in a heartbeat. There are, however, plenty of people who haven’t developed that sense yet.

In their latest blog post, Microsoft talks a little bit about how Bing has worked to keep malicious ads from reaching end users and putting them at risk of having their browser hijacked, or worse. It’s a pretty interesting read and makes you appreciate just how much worse advertisements could be. 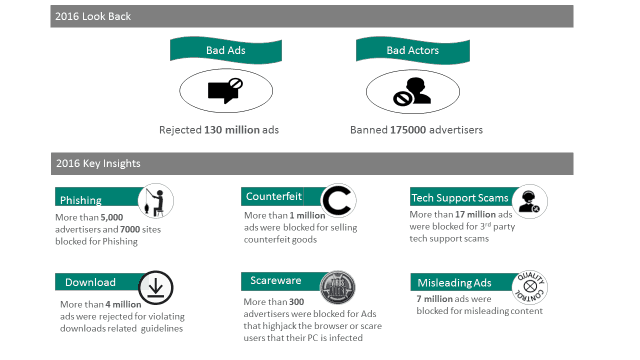 Bing has rejected a whopping 130 million ads through 2016 alone. To put that in perspective, doing the same amount of work without Microsoft’s automated processes would take about 500 years. These filters are no joke.

As Microsoft goes into 2017, they say that they’ll be evolving their methods to address some of the new challenges that are arriving. Hopefully, they can keep up with some of the “nefarious schemes” that they suspect are in the works.