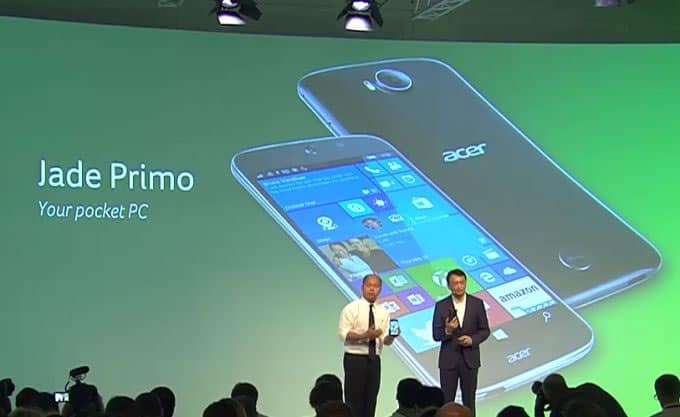 Acer had a pretty neat run at IFA 2015 in Berlin earlier this week. The company introduced a number of products including a few Windows 10 Mobile devices. More importantly, the company introduced a high-end Windows 10 Mobile handset, the Jade Primo. The company was a little mum on details about the handset, especially its pricing and availability, as well as its detailed specifications, but we did see a video giving us a glimpse of the handset.
The handset will boast a 5.5-inch Super AMOLED display with the processing being handled by the Qualcomm Snapdragon 808 chipset. It will also have a 21MP camera. All these things make it a decent high-end offering, especially in the Windows Phone ecosystem, where the market is mostly dominated by low to mid-range Lumia handsets. It's also one of the first phones to come with support for Continuum, meaning that you can dock the phone to a monitor and use it as a sort of pocket PC.

Recently, the folks at GSMArena managed to get a decent hands-on time with the new Acer Jade Primo, showing the device in all its glory, along with their initial impressions of how the device feels. As far as the design is concerned, there aren't any exquisite materials or looks being used, but rather a plain exterior. GSMArena describes it as "Just an ordinary-looking device, but one with an important mission of introducing Microsoft's concept of a more convenient future."
On the software side, Microsoft still hasn't announced the exact availability date for the launch of Windows 10 Mobile, but it shouldn't be too far away. Rumors hint at a launch event in late-September or October for the unveiling of the new operating system alongside a few new devices.
Because the operating systems is still in its preview stages it ran  smoothly on the new device with a few hiccups here and there, according GSMArena. Bugs are expected as the software is still in beta stages -- it is available in preview form for users to try and provide their valuable feedback to iron out bugs and issues.
The Acer Jade Primo is an intriguing device both because of its Continuum support and it being from a manufacturer other than Microsoft. We'll have to wait and see if either or both of those become popular.