After several delays, Guest Access for consumer accounts in Microsoft Teams will finally start to roll out next week. Microsoft  previously enabled Guest Access for Azure AD accounts last year, but opening it up to all email accounts was one of the most requested features from companies working with people outside of the organization.

“Anyone with a business or consumer email account, such as Outlook.com, Gmail.com or others, can participate as a guest in Teams with full access to team chats, meetings and files, explained Anne Michels, Sr. Product Marketing Manager for Office 365. “All guests in Teams are covered by the same compliance and auditing protection as the rest of Office 365, and can be managed securely within Azure AD,” she continued.

Guest access is turned off by default in Microsoft Teams, so admins will first need to enable it in the Office 365 Admin Center. Once it’s done, team admins can invite guests by selecting “Add members” in the team menu, and then add the guest’s email address. Guests will then receive an email invite, and those who don’t already have an MSA account will be invited to create one to join the team. 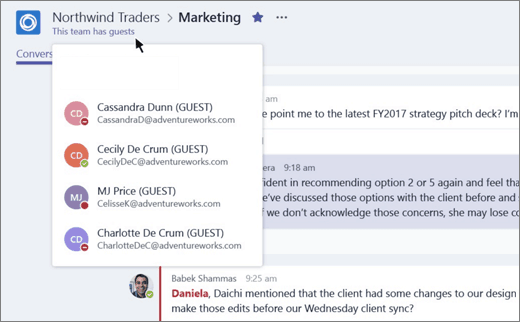 Every time team owners add new guests to a team, team members will be notified with a message in the channel thread. Guests will also appear with a specific label next to their name, and they won’t be able to do some things like adding apps, join public teams or create new teams. Other than that, guest will be able to use all basic communication features, including audio and video meetings.

Opening up Guest Access in Microsoft Teams is one of the things Microsoft needed to do to achieve feature parity with Slack. Another thing would be offering a free version of Microsoft Teams so that everyone with an MSA account could try the team collaboration app. According to the code of the latest developer preview of Microsoft Teams, a freemium business model could be exactly what Microsoft has in mind.