Check out this Minecraft model an 18 year old built of downtown Chicago, and download it yourself

There are quite a few impressive builds in Minecraft created by community members as large as scaled worlds and as simple as binary calculators. However, one creation that has cropped up recently is a replication of the windy city, Chicago (via Chicago Tribune.)

Ryan Zull is a New York University student that shared the latest of his project on the Chicago subreddit under the username Koodoo25. This large scale model of the city's buildings and streets was started in July 2013. Even though the buildings are empty of interiors, the streets are built to scale by the use of Google Maps as a guide.

According to Zull, the blocks are mostly on scale at a 56% of the original size. Otherwise, everything wouldn't fit. Even though working with 50% would be easier to calculate on a broader scale, he felt the need to make everything as big as he could. He wrote:

Minecraft has a height limit to everything you build. One block is 1 meter on each side. Nothing can be built over 256 meters, but the Sears Tower is 442 meters tall, so in order to fit everything in under that height limit, I had to scale everything down to 56% of its original size.

The build itself is impressive and has many users from Chicago interested in finally picking up Minecraft just to try it out. Some have also recollected their history in the Windy City, grateful to see it portrayed in a digital world as art.

But it still isn't even near finished yet. Zull wants to eventually add all of downtown Chicago as he moves out. Unfortunately, Soldier Field and Wrigley Field might be a bit too far for the project creator to include in the long run. After all, this Chicago model built in Minecraft has taken approximately five years so far, and that is on and off. 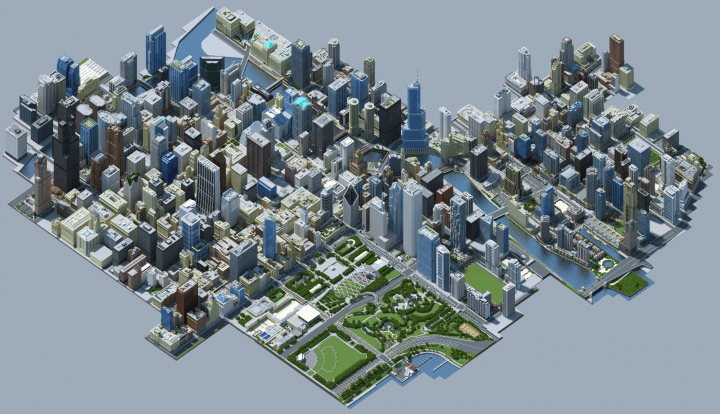 And that's even with the WorldEdit tool that fills in large spaces of blocks. But the smaller details are addressed manually. "It can take anywhere from 5 minutes to 2 hours to make each building," he explained. "Adding the detail to each street is another 10 minutes for each block."

The map can be downloaded for PC via Planet Minecraft, a community site for sharing content for the popular sandbox.