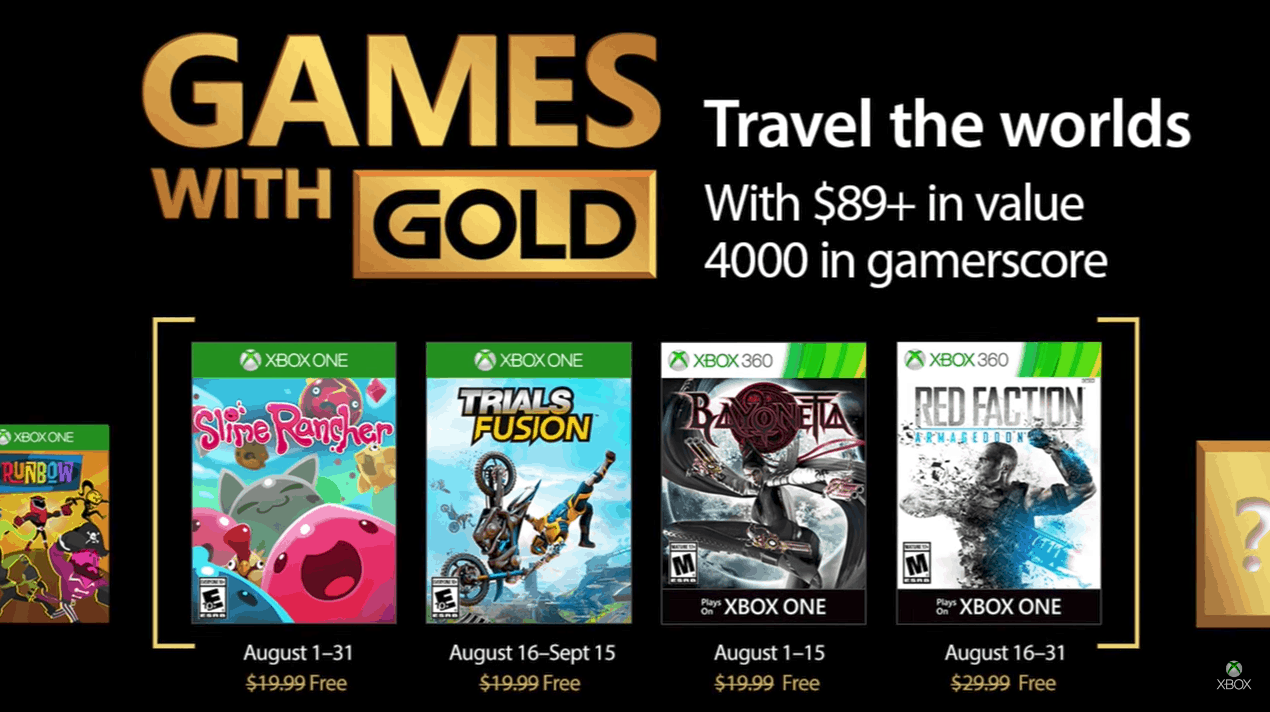 In addition to the latest Deals with Gold and Spotlight Sale, the Xbox team has just announced the August Games with Gold titles and the lineup should hopefully please most Xbox Live Gold subscribers. On the Xbox One, the upcoming life simulation video game Slime Rancher will be free to grab on its launch day (August 1), along with the cult-classic Xbox 360 title Bayonetta. Then on August 16, the popular platform racing game Trials Fusions will be available to add to your Xbox One game library, in addition to the Xbox 360 shooter Red Faction: Armageddon.

As usual, we’ve included all the details about these four games below, including official descriptions and video trailers.

Slime Rancher is the tale of Beatrix LeBeau, a plucky, young rancher who sets out for a life a thousand light years away from Earth on the ‘Far, Far Range’ where she tries her hand at making a living wrangling slimes. With a can-do attitude, plenty of grit, and her trusty vacpack, Beatrix attempts to stake a claim, amass a fortune, and avoid the continual peril that looms from the rolling, jiggling avalanche of slimes around every corner!

Built upon the Trials franchise’s proven gameplay foundations, Trials Fusion challenges players endlessly in both classic and all-new ways. It melds the classic, proven Trials formula of simple yet addictive competition with the social and visual breakthroughs of the next generation of gaming.

From the creative geniuses behind Devil May Cry and Resident Evil comes Bayonetta™, a game of 100% pure, unadulterated, climatic action. With powers far beyond the comprehension of mere mortals, our heroine Bayonetta fights countless enemies, evil forces and giant foes in brutal yet graceful ways.

Mankind finds itself poised on the brink of extinction deep underground.  Darius Mason is humanity’s last hope for survival.

This is a pretty solid selection of games overall, and we're really pleased by the addition of Trials Fusions, which is a very fun game to play with your friends (should we add that the game also supports local multiplayer with up to four players?). Sound off in the comments if you're looking forward to play these four games on your Xbox One next month.

Xbox shines a light on indie games with the Summer Spotlight, starting today

How to get started with Microsoft Teams