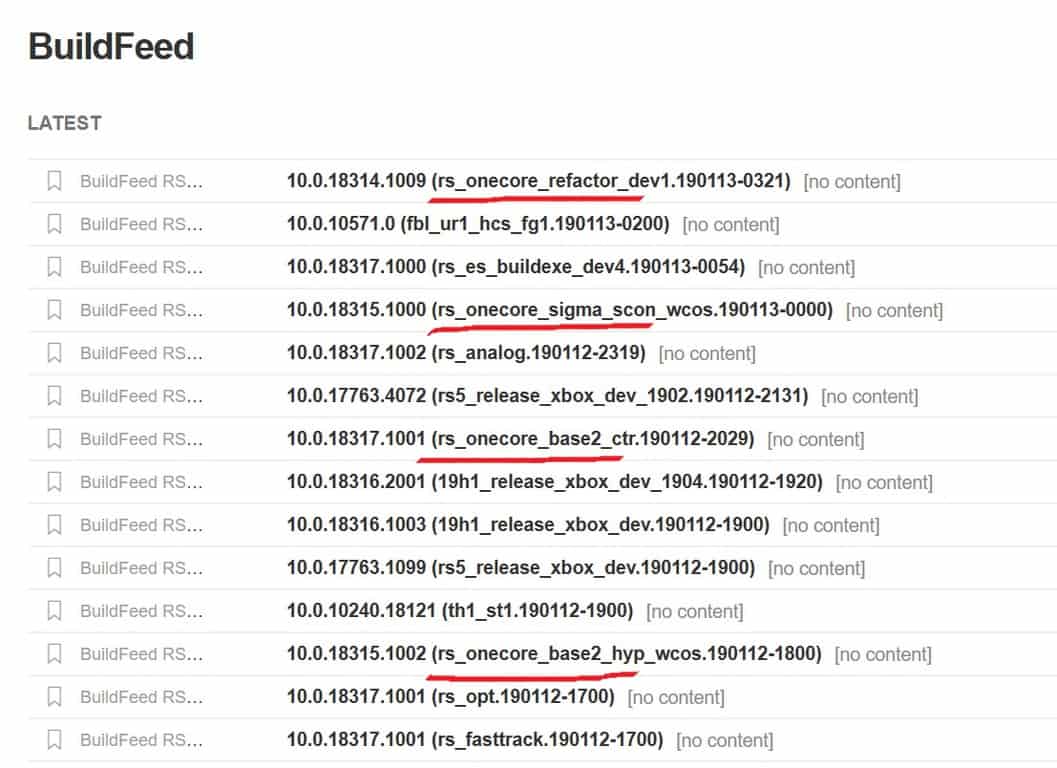 Over the weekend, there was an unusual amount of shall we say interesting activity over at BuildFeed.net, a site dedicated to posting sometimes prescient information on Windows Insider build numbers, often well before they were released, and often posting build numbers that never saw the light of day. We posted this morning on the activity, noting that a bunch of builds marked as onecore, wcos, or even "shell_devices_foldable" were posted, but that wasn't the end of the story. Later this afternoon, BuildFeed founder Thomas Hounsell, who writes that he hasn't "been involved in the day to day running of BuildFeed for over two years now," took down the site and put up instead a bit of a goodbye. We'll go ahead and repost it here, it's not long:

When I started up BuildFeed over five years ago, I never expected it to grow as large and as widely used as it has been. I've not been involved in the day to day running of BuildFeed for over two years now. I left that in the hands of a few trustworthy friends, and I and the users of the site owe a debt of gratitude to these men. Without them, this day would have arrived some time ago.

You've probably noticed some funky build strings pop up on BuildFeed lately. That's because a Microsoft employee posted them on BuildFeed. For those interested parties, don't bother coming to me. I have no IP logs, I have no "inside" insight as to what our mutual friend has been up to. Could you find out who it is? Sure, just look on Twitter and see who was posting build tags ahead of BuildFeed. He's not been remotely discreet and he handed out the strings to plenty of others before BuildFeed accepted them.

The long term future of BuildFeed has been in doubt for some time, but events over the past few days have resolved things in my mind. Given extensive internal pressures and external pressures (and yes, Microsoft is one of those relentless and ever-present external pressures), I have found myself unable to commit to running BuildFeed on the principles it was founded upon. In light of this, I have made the decision to terminate BuildFeed with immediate effect. The truth is that were it not for my failings, this day would not have come; and were it not for the persistent activities by third parties to force us offline, this day would not have come either.

The good-ish news for you is that what Tom giveth, Tom cannot always take away. You have the source code, safe on GitLab. Additionally, since many people have contributed to the database of build strings over the years, I'd feel a bit ashamed to take that away, so here's that database dumped into a JSON file. I would encourage anyone to take up the challenge and continue the desire I had those many years ago, to establish a truly authoritive build list.

Hounsell denotes Microsoft as one of a number of "relentless and ever-present external pressures," but it's not clear from the wording if the company issued a cease and desist or DMCA notice, or just wasn't happy. Hounsell does mention "the persistent activities by third parties to force us offline," but if Microsoft had a beef with anyone, it might better be the "Microsoft employee" who apparently released the flurry of posts. The code for the site hosted on GitLab is still available as of this writing, as is the JSON dump of the database holding all of the posted builds, etc., and there is already at least some community interest in keeping it going.

(update:) Hounsell added a note to his checking out post, confirming that there has been no cease and desist letter, as we suspected:

Microsoft has not and has never issued a Cease & Desist to BuildFeed. They have never explicitly asked that the website has been taken down. They have never (directly) asked me to disclose the sources for the site. They have played their hand far too well to stoop to such messy and clumsy tactics.

As we've learned over the years, it's a fine line between being first with the news and getting perhaps in trouble, but posting build numbers doesn't seem like a particularly harmful act. Sometimes however, efforts turn out to be more trouble than they're worth.

We'll keep you posted on the future of "BuildFeed v2," and as always, for all the latest on Windows 10, Windows Insiders and a lot more, stay tuned to OnMSFT.com.