As the Windows 10 November 2019 Update (19H2) is right around the corner, the May 2019 has reached a new milestone according to AdDuplex. Indeed, the company’s latest report reveals that more than half (56.6%) of the 90,000 surveyed Windows 10 PCs running AdDuplex ads, were now running the May 2019 Update in October. 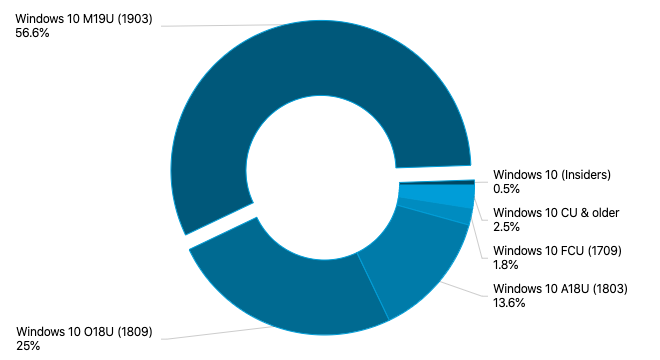 "Almost all of 11% gained by May 2019 Update come from A18U and not from the October 18 Update,” AdDuplex noted. That makes sense, as the April 2018 Update will reach end of support next month, and Microsoft announced during the summer that it would automatically update these PCs to the latest Windows 10 release.

AdDuplex also published new data about the Surface family of devices following the release of the Surface Pro 7 and Surface Laptop 3 earlier this month. The new devices already show up on the lower positions in the chart, and the Surface Pro 7 is once again proving more popular than the new Laptop model.

It will be interesting to see if the ARM-powered Surface Pro X, which will start shipping on November 5, can fare better than the Surface Pro 7 and Surface Laptop 3 in AdDuplex’s next survey. That’s not guaranteed at all considering its $999 starting price.