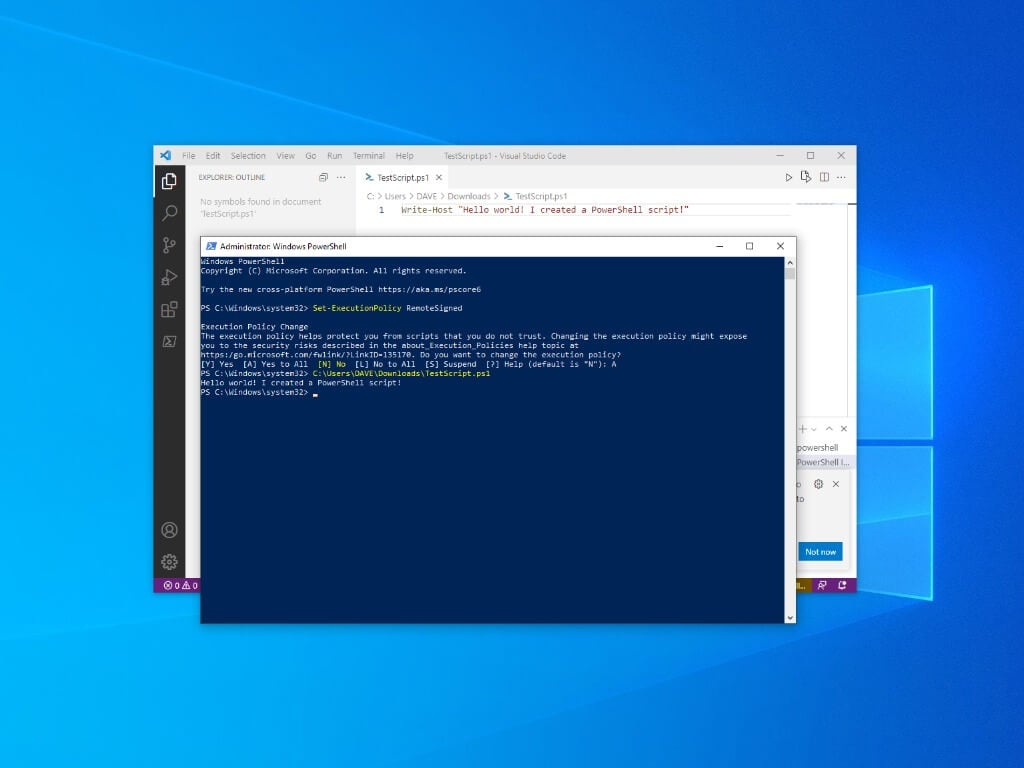 How to create PowerShell scripts on Windows 10 and Windows 11

Previously, you could create scripts using almost any text editor. However, Microsoft's preferred option moving forward is to use the Visual Studio Code editor with the PowerShell extension.

Visual Studio Code (VS Code) is a powerful, but lightweight source code editor that runs on your desktop and is available on Windows, macOS, and Linux.

VS Code comes with built-in support for JavaScript, TypeScript and Node.js. As an added benefit, you get a rich ecosystem of extensions for other development languages, including C++, C#, Java, Python, PHP, Go, as well as and runtimes, such as .NET and Unity.

In this guide, we will concentrate on what to do to prepare your PC to create PowerShell scripts on Windows 10.

1. Download the VS Code installer on Windows
2. Once downloaded, run the installer (VSCodeUserSetup-{version}.exe) to install VS Code

Alternatively, you can also download a Zip archive, extract it, and run the VS Code installer from there.

Once VS Code is installed, the PowerShell extension needs to be installed to allow for PowerShell scripts to be created.

Install PowerShell extension on VS Code

Here's how to open VS Code and install the PowerShell extension

1. Open VS Code
2. Click Extensions from the left pane (arrow indicator)
3. Search for and select "PowerShell"
4. Click Install button to install the PowerShell (or PowerShell Preview) extension on VS Code 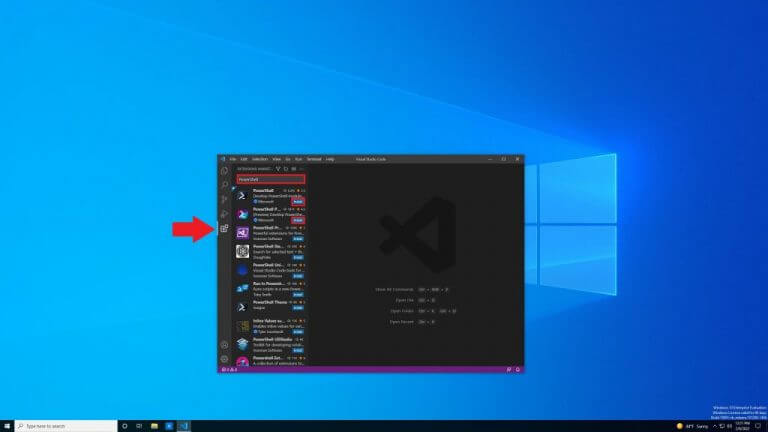 After you complete the steps, you can start creating PowerShell scripts on Windows 10 with VS Code.

Create PowerShell scripts with VS Code

Here's what to do to create a script:

1. Open VS Code
2. Click the File menu and select the New File option. Alternatively,
use the Ctrl + N keyboard shortcut 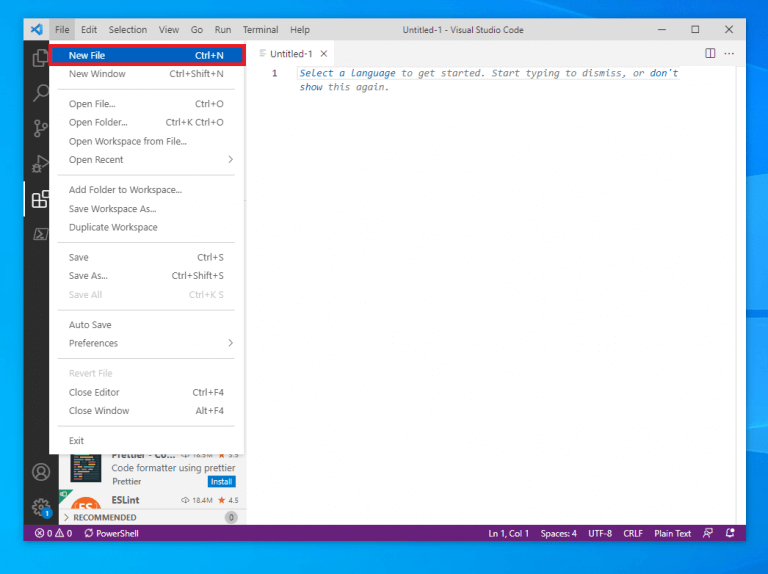 3. From here, you can go to File menu again, then select Save As to change the file type. Alternatively, use the keyboard shortcut Ctrl + Shift + S
4. Change the File name and location as you wish on your PC. Change the "Save as type" to PowerShell as shown 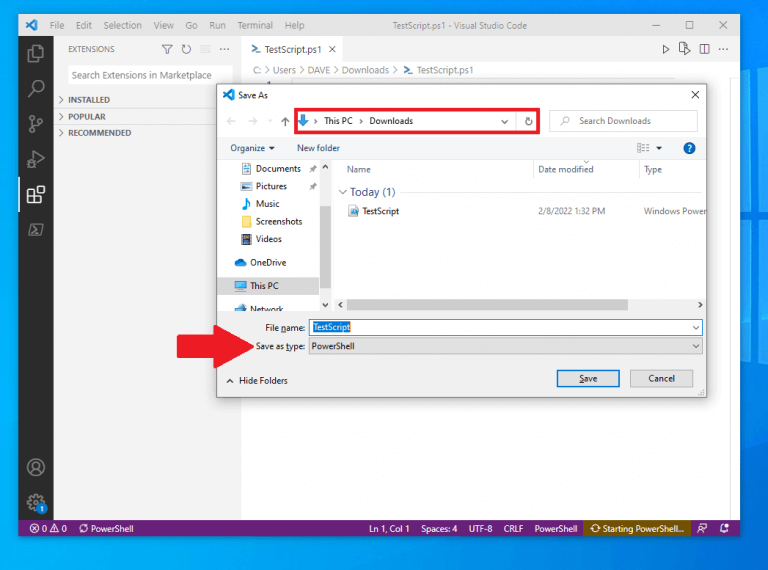 Now that a PowerShell script file is created, it should appear in your files as a Windows Powershell file, with a .ps1 file extension. With the newly created "TestScript" PowerShell file, we can add a command for the file to run in PowerShell. Here's what to do. 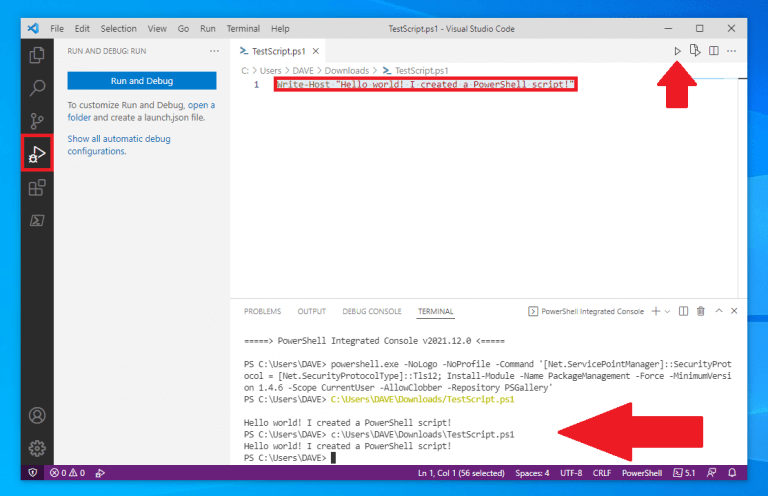 Once you complete the steps using VS Code, the PowerShell script will be ready to run. But before you run your script file, you need to change the execution policy on Windows 10. By default, scripts are not authorized to run in PowerShell.

Here's how to change that.

1. Open PowerShell and Run as Administrator
2. Copy and paste the following command to run PowerShell scripts:
Set-ExecutionPolicy RemoteSigned
3. Press Enter to run the command
4. Type A and Press Enter 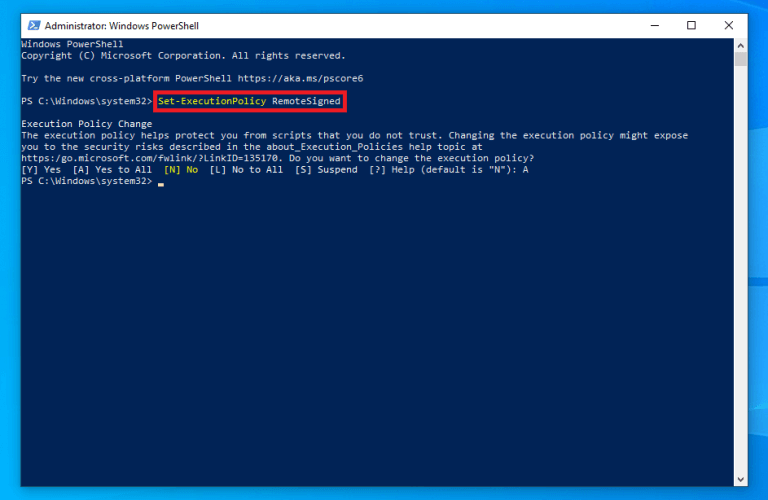 After you complete the steps, the PowerShell script will run. If the script was written correctly, you should see its output in PowerShell. 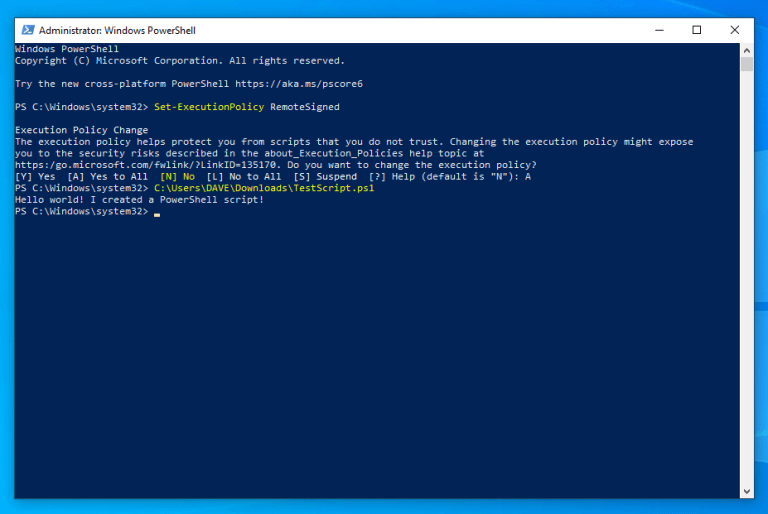 For more helpful articles, coverage, and answers to frequent questions about Windows 10, visit the OnMSFT resources available below.

Windows 10 on OnMSFT - All you need to know

Windows 11 on OnMSFT - All you need to know

Have any suggestions for Windows 10 and Windows 11 tips and tricks? Let us know in the comments!

Rockstar Games confirms "Grand Theft Auto 6" is in the works