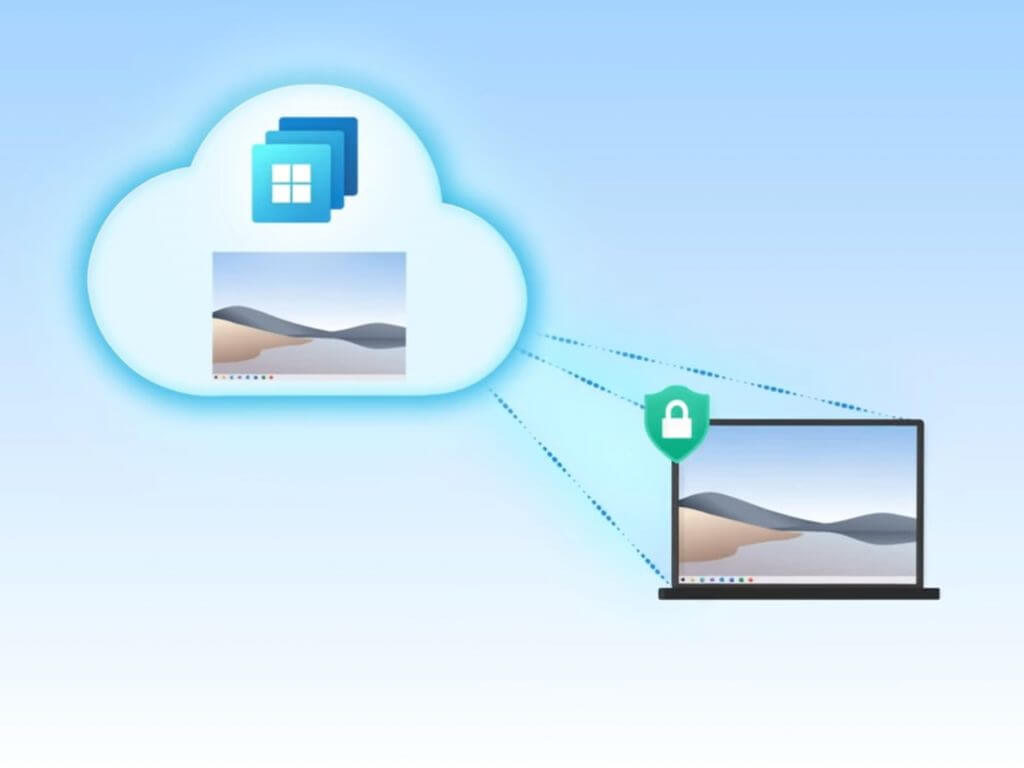 Windows 365 is a new cloud service by Microsoft that takes the operating system to the Microsoft Cloud and securely streams the full Windows 10 or Window 11 experience – including all apps, data, and settings – on one’s personal or corporate devices.

Cloud PC is a continuation of Microsoft’s journey to take its products and services to the cloud – from Windows Server on Azure to Office suite as part of Microsoft 365. Together with Microsoft Teams and Microsoft 365, Windows 365 will enable the post-pandemic digital workplace of the future and give organizations the flexibility to address the changing needs of its workforce in a hybrid work setup.

According to Microsoft, this new paradigm isn’t just about allowing and securing remote access but alleviating user experience issues and improving productivity. Windows 365 is built on Azure Virtual Desktop and it essentially simplifies the virtualization experience and removes the complexities of traditional VDI (Virtual Desktop Infrastructure) deployments. Virtualization can often be challenging to set up and maintain, especially for organizations without dedicated IT resources. However, large enterprises which require greater customization and flexibility can continue to opt for Azure Virtual Desktop to modernize their VDI in the cloud. 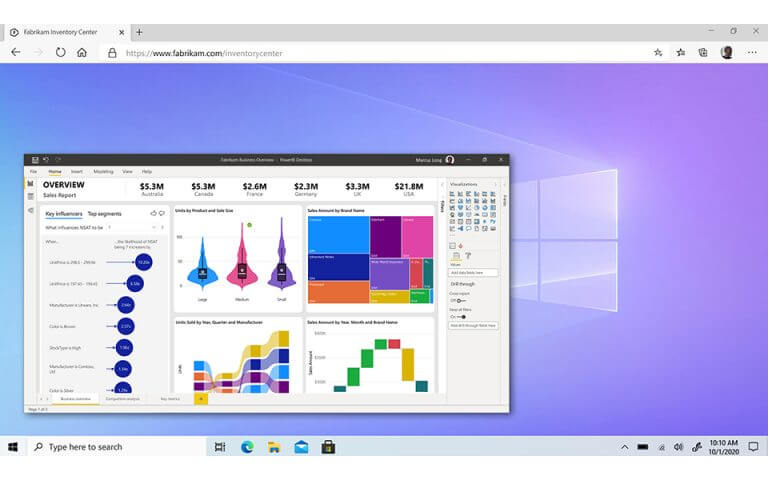 Windows 365 offers a consistent Windows experience, no matter the device/operating system – Windows, Mac, Linux, iOS, or Android. It supports business apps like Microsoft 365, Dynamics 365, Power Platform along with line of business apps and other third-party apps. Customers with 150 or more users will also be able to avail Microsoft’s App Assure service that helps fix app compatibility issues at no additional cost.

It provides an instant-on boot experience that enables users to stream all their personalized applications, tools, data, and settings from the cloud across any device and allow them to pick up right where they left off on the device of their choice. The state of a user’s Cloud PC remains the same, even when they switch devices.

Windows 365 enables IT teams to procure, provision, and deploy Cloud PCs in minutes, with optional automated OS updates. The administrator can optimize experiences on Windows endpoints while the business can tailor compute and configurations for an elastic workforce as well as scale with a user’s changing compute needs. It also allows organizations to ramp on and off according to the needs of the business allowing them to scale for busy periods without the logistical challenges of issuing new hardware. Organizations will be able to choose the size of the Cloud PC that best meets their needs with a per user per month pricing.

Windows 365 is available as part of specific Microsoft 365 or Enterprise Mobility Suite (EMS) subscriptions as well as Windows 10 Enterprise and Windows Virtual Desktop Access (VDA) plans. To use Windows 365, you have to have the following requirements, according to a post on the Microsoft Tech Community blog:

There are also a bunch of other Azure configuration requirements that you can check out here. 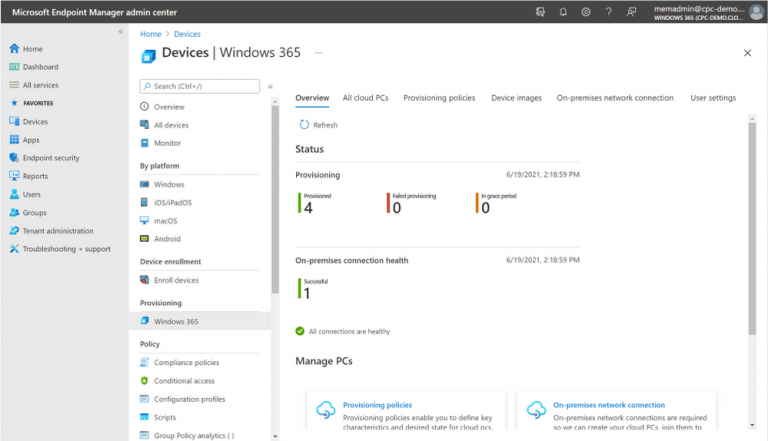 Windows 365 is consistent with how IT manages physical devices right now. The Cloud PCs will show up right alongside physical devices in Microsoft Endpoint Manager, and the IT team can apply management and security policies to them just as it's done on all other devices. Using the Microsoft Endpoint Configuration Manager, IT administrators can deploy apps, software updates, and operating systems as well as monitor compliance and query and act on clients in real time. 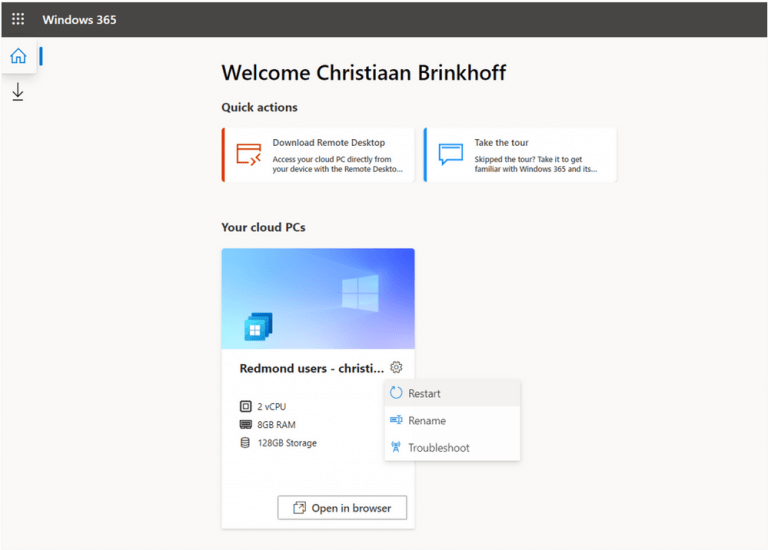 To simplify access for users, Microsoft has created the Information Worker Portal - cloudpc.microsoft.com -that allows end-users to choose between accessing their Cloud PC via the browser, macOS, Android or via the Remote Desktop (MSRDC) client. If the user has the permission to provide self-service upgrades, they will also see the Restart workspace option to use in case of emergency or to troubleshoot performance related issues that require a reboot of the machine.

Windows 365 supports a variety of endpoints, with different levels of available functionality. Of course, the best ways to experience Windows 365 is a Windows desktop, but different scenarios might have different needs and can be sufficed by one or more endpoints. 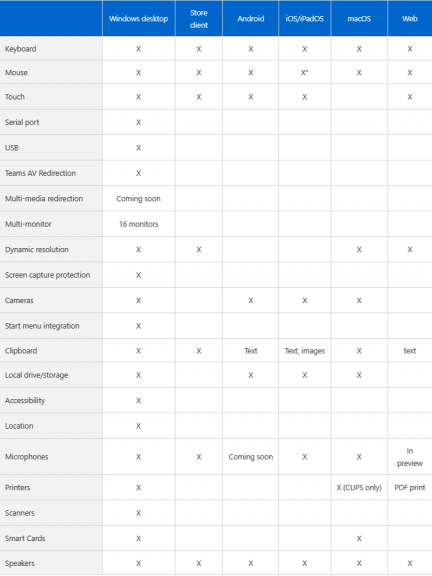 Windows 365 is built with a focus on a Zero Trust architecture and the user and admin experiences have been designed around the principle of least privileged access. It stores information in the cloud, not on the device, and encryption is used across the board. All managed disks running Cloud PCs are encrypted, all stored data is encrypted at rest, and all network traffic to and from the Cloud PCs is also encrypted.

Window 365 works with multi-factor authentication (MFA) and passwordless authentication when these are activated by the IT administrator. MFA works to explicitly verify any login or access attempt to a Cloud PC through integration with Microsoft Azure Active Directory (Azure AD).

If the organization uses Microsoft Defender for Endpoint to protect its devices, it also works seamlessly with Cloud PCs. It not only protects their Cloud PCs, but also gives security recommendations to lower risks, and helps in quick discovery and investigation of any security incidents.

Unlike other virtualization services, Windows 365 is defined by per-user-assigned license via the Microsoft 365 admin center portal in the same manner as administrators would assign other licenses, such as a Microsoft 365 E3/E5 license, to users.

A full range of available configuration and example scenarios is available here.

Windows 365 will be available on August 2, 2021, to organizations of all sizes. While Microsoft will announce the pricing on that day, the company inadvertently leaked the indicative pricing of one of the variants in a Microsoft Inspire session which was picked up by Tom Warren of The Verge, and later confirmed by Microsoft. It looks like a Windows 365 Cloud PC with 2vCPU / 4GB / 128GB will cost $31 per month per user. For comparison, Citrix offers Desktop-as-a-Service for $25 per month per user while Amazon offers desktop virtualization for $33 per month per user for a similar configuration. 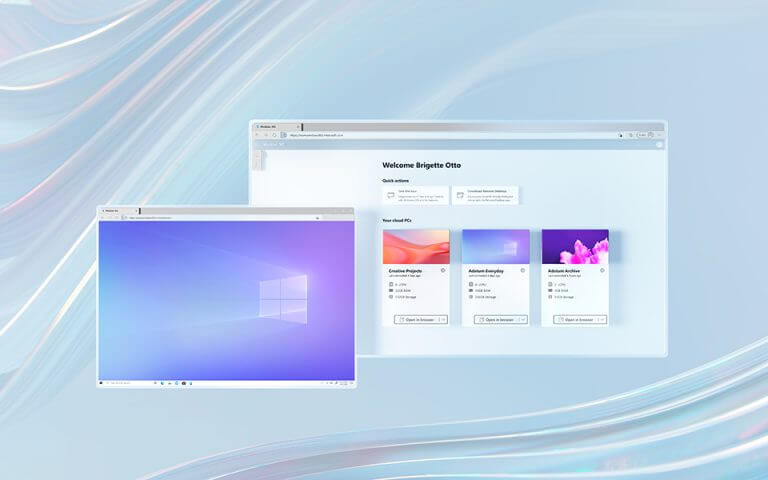 Technically, Windows 365 is no different from the myriad of virtualization options available in the market for years, including Microsoft’s own Azure Virtual Desktop as well similar offerings from Citrix or VMware.

However, Windows 365 aims to trump those in both ease of use and management and is designed for today’s mobile and elastic workforces. It will also appeal to organizations that have wanted to explore virtualized infrastructure but were wary of costs or complexities with little in-house expertise.