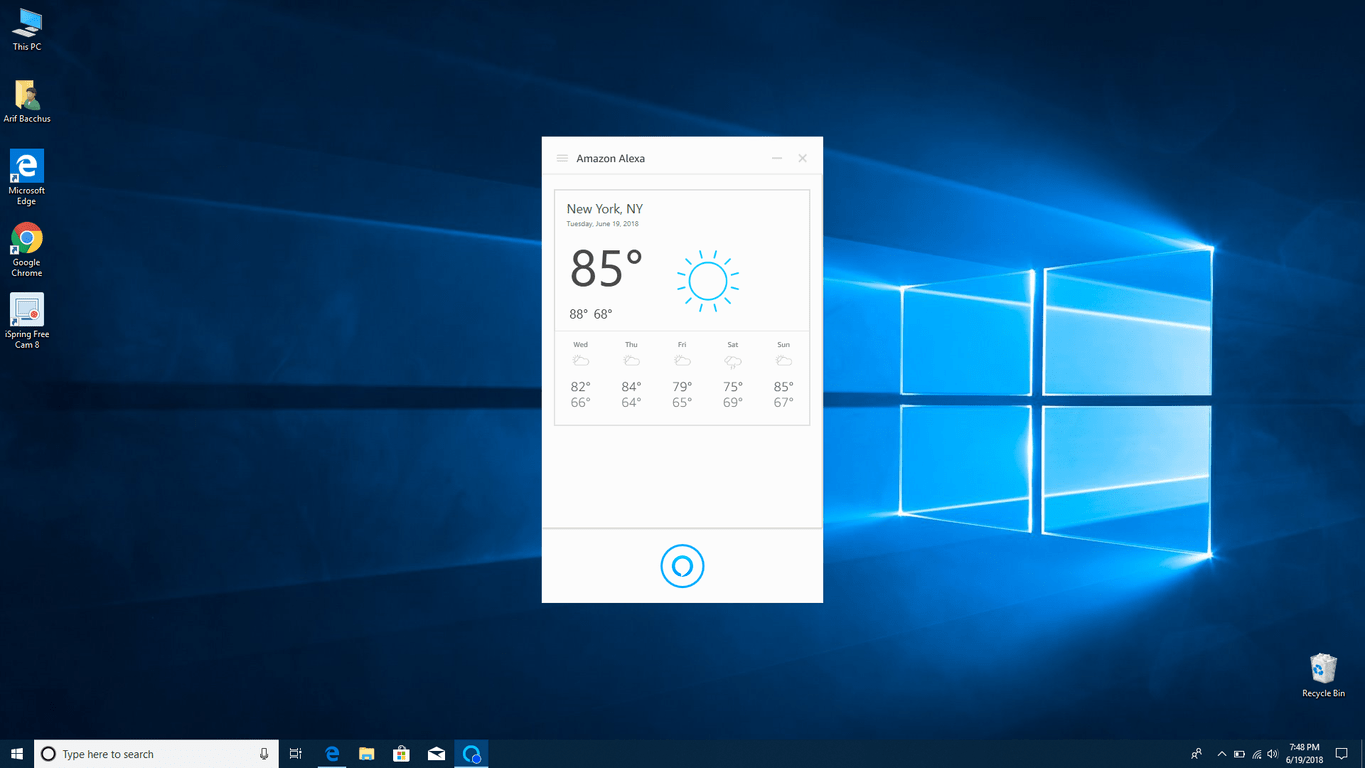 Cortana has long been the only digital assistant available on Windows 10, but some of this year's PCs from Lenovo, Acer, and HP also now come with Amazon Alexa installed on board. Yesterday, our colleagues over at Windows Central published a download link for the Alexa app on Windows, so after trying it today here's a hands-on look at the experience.

Alexa is officially only supported on the previously mentioned PCs, but it can still run on any Windows 10 PC with the right .exe install files. Indeed, after clicking and running the .exe file, the Alexa setup will install Microsoft Visual C++ 2015 as part of the prerequisites. It will then install the Amazon Alexa App itself, and let you know when it is finished. Once done you can open the Alexa app from the start menu and sign in with your Amazon Password. You can also tweak the settings on this first boot and enable Alexa to launch when you boot up your computer.

Even though Alexa's wake word doesn't work on my PC, the Alexa app on Windows 10 functions just as it would on an Echo device. Once pinned to the taskbar, you can manually summon Alexa and easily ask the assistant all kinds of general trivia or questions about weather, reminders, jokes, and the news. Of course, Cortana already can do most this stuff, but Alexa does have some extra third-party skills and knowledge which Cortana currently lacks. Please be aware, though, that Alexa on PC can't make phone calls or send messages, as this is an exclusive feature for Echo devices.

Alexa also integrates nicely with Amazon's own services, including Amazon Music. Amazon shopping is included too, and you can ask Alexa to add certain items to your shopping cart. Answers will be provided in a card-style interface, similar to the Android version of the app. You can see all this in the video below, where I asked Alexa about NASCAR, have it play Jeopardy with me, and asked it to play me a song. It's nice to have this stuff available from another service, even though Cortana already does most of it.

Keeping Alexa on the taskbar

Cortana has a dedicated area on the taskbar in Windows 10, and you can do something similar for Alexa if you feel the need. To do this, you can head to the start menu and find Amazon Alexa in the list. After that, you can right-click on it, select "more." and then click on "Pin to Taskbar." This will eliminate the need to constantly open the Start Menu and click on the app to interact with Cortana.

It's likely a limit set by Microsoft, but with Alexa and Cortana partnership still on the way, more might be heading to the dedicated Windows 10 app soon. This also could be why the Alexa wake word also won't work on certain PCs, as I described above.

At the end of the day, Alexa on Windows 10 doesn't really live up to the hype that I thought it would. The app does some extra things and has more third-party connections, but it's not really as productive and integrated with Windows as Cortana is. As a Windows user, I feel as though Alexa is not nicely designed and clean, and just a wrap of an Android application. There's more time on the road ahead for this Amazon Alexa app to evolve, and I'll be sticking to Cortana for now.