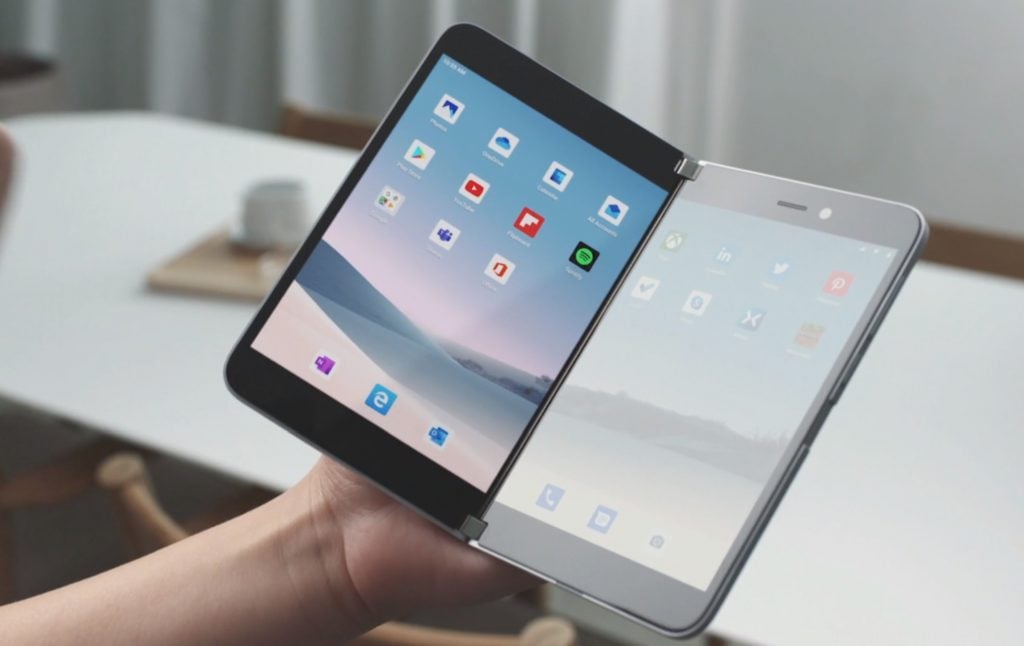 Yesterday, Microsoft announced an emulator for the Surface Duo. In a blog post, the company described how developers can use it to their advantage to create apps for the upcoming dual-screen device that can "delight people in a new and innovative way." Since then, many publications have gone hands-on with it, from Rich Woods at Neowin to Windows Central's Zac Bowden.

After watching demo videos of the emulator, and a video where it was superimposed over an actual Surface Duo, I can't but help to agree with Microsoft. The Surface Duo emulator definitely is delightful and is providing a hopeful peek at the future of Android on the Surface Duo. Here's why.

We already know that Microsoft Launcher will be powering Surface Duo. An early preview version for standard Android phones provided a look at what things could shape up to be. However, this new emulator is the first time that we've seen Microsoft Launcher and the overall user interface of Surface Duo in action on a simulated dual-screen setup. Compared to what Samsung has done with its One UI on the Galaxy Fold, it's downright fluent and beautiful.

In the demo videos, we can see the redesigned Microsoft Launcher Activity screen on the left, and the standard home screen on the right screen. It's clean, and the card interface makes much sense and can help increase your productivity on a large dual-screen device. The Activity feed provides information at a quick glance, and you can still see and access your home Android screen on the right. Android's task manager also only appears on just one display and allows you to choose more apps as you need them --- and drag across the screen as needed.

The animation to dismiss the Activity Feed itself is also clean, and the full Android home screen "slides" in a bit, in an efficient way. You even have access to up to 6 apps on the "dock." (That's three on each screen when extended to dual-screen and all six on one screen when multitasking) I've never quite seen anything this seamless and beautiful before, and I believe there's a lot of hope here for Surface Duo being used as a productivity device or tablet.

Even more so, Microsoft Launcher on this emulator is consistent with what we've seen on Android 10. Android's card-style app switcher never made more sense. It gives you a "live" look at the app as it was last paused, regardless of which of the two screens its open on. This, too, has the potential for helping boost your productivity, as you can see an all apps how you last left it while switching.

Another point to note with this emulator is the way how Stock Android apps themselves would work on the Surface Duo. While the Google Play Store doesn't appear (and isn't compatible) this emulator, we know that Microsoft is urging developers to code apps for the dual-screen format. Apps can span into an  “extended canvas,” “two page,” “dual,” and “companion pane.” mode. Though, as we see, the single-screen view is the default.

In context - this feels even more magical. pic.twitter.com/8yLLoioE1K

Microsoft has obviously put a lot of thought into this, and it's downright beautiful. For instance, at the 1-minute mark in the video above, we see for the first time outside a promotional video how a Stock Android app can be spanned across the two-screens. It's held in the middle seam of the device, and then "opens" up like a book, giving you access to it on both the left and right screens. There's even a neat animation for that, too.

In Neowin's video, we even see how apps can be "stacked" side by side It's a small touch, but it's really delightful, to say the least. The design of Android apps have been known to suck on big-screen tablets, and even on Chrome OS, but Microsoft is changing that. The company is showing developers how their standard apps can be useful for multi-tasking on a dual-screen and even the larger tablet screen.

As these videos just show an SDK and emulator, there are many things that could change. Some apps in the SDK and emulator don't launch side by side and there are limits. However, Microsoft appears to have learned its lesson from Windows Phone. Microsoft is pushing out an Android phone, which has support for millions of apps. It's also pushing developers to support  SS primitives for dual-screen layouts, the JavaScript Window Segments Enumeration API, and even is helping make PWAs compatible with dual-screen devices. The company means business and it wants to work with developers and help get them on board the dual-screen party, and it's great.

Windows 10 Your Phone app can now display your last 2,000 photos