Microsoft on Linux: It’s a lot easier than you think

There once was a time when Microsoft Windows and the open-source operating system, Linux, were bitter rivals. In 2001, Microsoft’s CEO Steve Ballmer even called Linux a “Malignant Cancer.”

Well, many years later. things have changed. Not only is Microsoft embracing Linux in Windows by bringing it to the subsystem for Windows 10, but the company has also moved some of its own apps to the open source operating system as well.  So, how easy is it to go all-out with Microsoft on Linux? Or, be a Microsoft fan with Linux? Let’s find out. 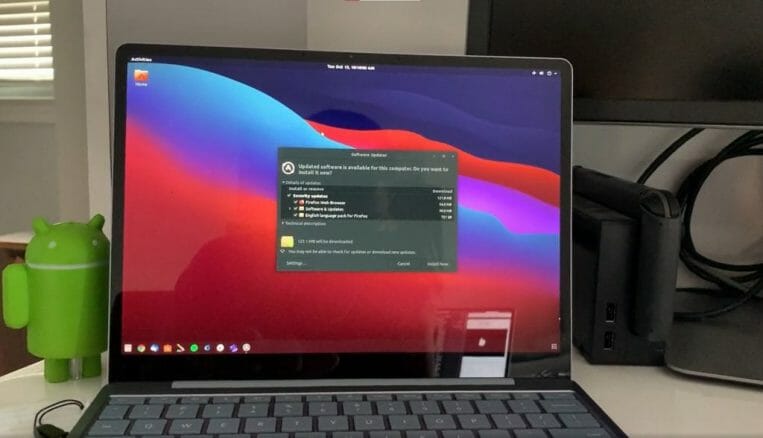 Before dipping into the software aspects of Microsoft on Linux, we’ll look at the hardware side of the story. Much like Windows 10, Linux is designed to run on almost any modern laptop or desktop. So, if you want to try Linux on top of Microsoft Windows, you can by partitioning your hard drive for it.

Some may even argue that Linux distributions run better on older (and sometimes newer) hardware than Windows might. Turns out, though, that Linux can actually run on Microsoft’s own Surface, products, too.

Yes, you got that right. Due to its open-source nature, many popular Linux instructions (including Ubuntu desktop) run fine on Surface devices. There are sometimes tweaks necessary to get drivers working right, but there’s an entire community dedicated to running Linux on Surface devices on Reddit.

If you’re really looking to go full-on Microsoft on Linux, these folks often have the workarounds you might be looking for to get Linux on your new Surface. I posted there about my experience of running Linux on the new Surface Laptop Go (sans the right WiFi, touch, and display drivers) and there was quite the reaction and suggestions on how I could get everything working right.

Others have posted about how they got Linux working on a Surface Pro 7, Surface 3, and even the Surface Book. It’s really interesting to see the Surface and Linux cross-overs. 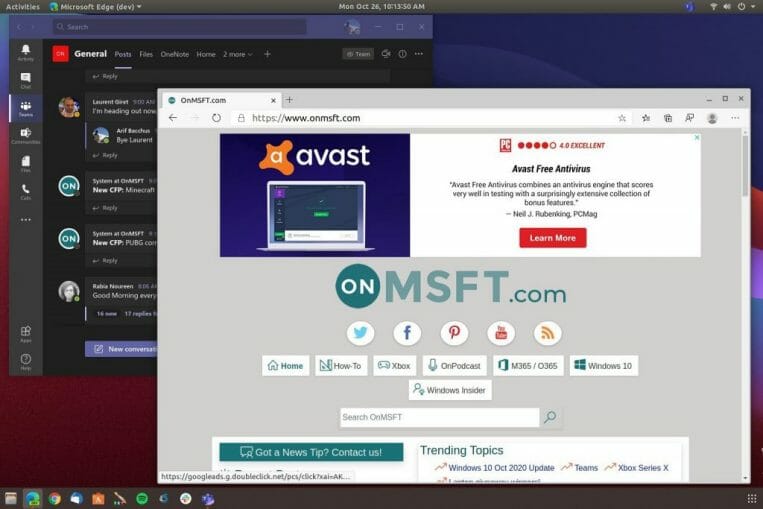 The hardware is one thing, but for the true Microsoft on Linux experience, you need apps. There are just two Microsoft apps that are officially and natively supported on Linux. That includes Microsoft Teams and Microsoft Edge.

These days, both of these apps are key to the work-from-home, and the school-from-home life. You need them to stay connected, and wind-down and enjoy some YouTube and browse the internet on Linux.

Well, it used to be that you had to depend on web apps in Google Chrome or Firefox to get Microsoft Teams on Linux devices, but now, there’s native support. You just need to use Firefox or a web browser of your choice in Linux to download it off Microsoft’s website, and you’re good to go. Teams on Linux even supports all the core capabilities of the Windows version, too, including chat, video meetings, calling, and collaboration on Microsoft 365.

But wait, there’s more! With the announcement of Edge Dev on Linux, Microsoft brought over yet another one of its apps to the open-source operating system. Indeed, downloading the web browser is simple, too, and it gives Microsoft fans, or anyone interested in Microsoft on Linux, a great way to get started.

Though the web browser doesn’t yet support the consumer features (like syncing or sign in with a Microsoft account) of the Windows and Mac versions, it’s a start. Microsoft noted it will be committed to Edge Dev releases on Linux just as it is on Windows, so install it now, and soon, the same Edge features on Windows will be on Linux, too.

If you’re looking for more Microsoft Windows apps on Linux, though, there is another workaround. Thanks to Wine on Linux, you can run select Windows apps inside of Linux.

Of course, this is through virtualization, meaning the apps won’t run as smoothly as Edge and Microsoft Teams do. You might also compatibility and performance issues. For instance. Wine doesn’t work well with the latest versions of Office but can install classic (unsupported) versions of Office like Office 2010. It’s a nice workaround, though, if you really want that Microsoft on Linux experience. 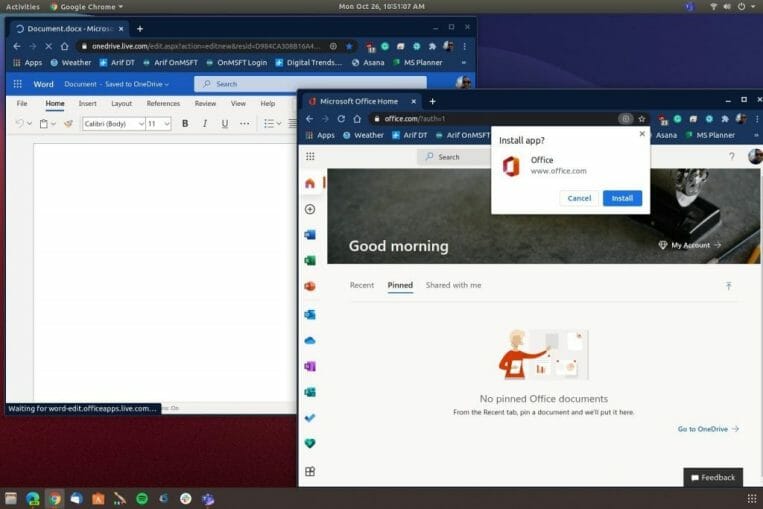 Okay, so both Teams and Edge are on Linux, but what about the Office apps? Microsoft hasn’t yet brought Word, Excel, PowerPoint over yet, but it doesn’t mean that you have to dismiss Linux. There’s an easy workaround, and it involves using web apps.

Compared to the full-blown Office apps on Windows, there are some limited functionalities. But the core editing, collaboration features are there. And, you can install the Office apps as Progressive Web Apps (PWA) which give you quick access to Office, in a windowed mode. The difference is, though, that you’ll always need to be connected to the internet for them to work.

While Windows is still the best way to experience Microsoft apps and services, it is not entirely impossible to enjoy Microsoft on Linux, too. Teams and Edge both work great, though Edge has its limits. It’s also great to see that you can use web apps on Chrome, too. Simply put, this isn’t the Microsoft of old. Be it for web developers, or the average consumer, Microsoft is on Linux, and it’s easier than you think.

Polls in Microsoft Teams meetings will start rolling out next month