If you’ve been considering a web browser extension that can help improve your writing, there’s now a new player you can choose from. Although Grammarly has long been the most popular solution, Microsoft recently introduced its own take known as Microsoft Editor.

This new A.I. powered tool looks to superpower the grammar and spelling corrections you’ve long seen in Word and the other Office apps. Just like Grammarly, Microsoft Editor is free to use, and there is a premium option available, too. But, how do the two stack up against each other? In this guide, we’ll explain the differences between the two.

Paid Grammarly plans step up the features and give you access to more suggestions for reliability, vocabulary, writing style, and even a plagiarism detector. With Microsoft Editor and Microsoft 365, meanwhile, you’ll get access to advanced grammar and style corrections, including for clarity, formality, and punctuation conventions.

If you’re just looking at the money, Microsoft Editor will be cheaper. It also might have more value for you, considering that you’ll be getting access to Microsoft’s other services, too. However, if you genuinely want a service that can genuinely help improve your writing, Grammarly might be the better option, as we describe next. 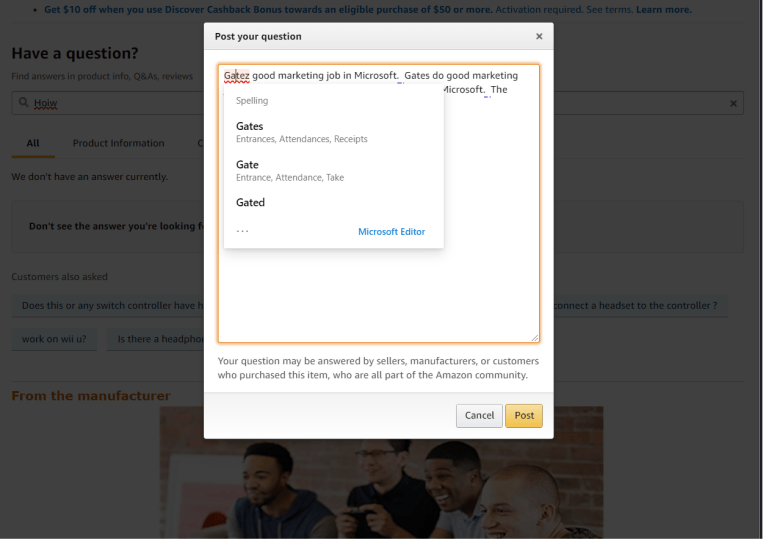 We tried using the Microsoft Editor extension on Edge in Windows 10 for writing this article and were disappointed. Despite us having an Office 365 subscription, it installed but didn’t work on spell checks on the websites we needed it most (WordPress, Google Docs, etc.) We tried it on Amazon.com for leaving a comment, however, and it worked just fine. Similar to Grammarly, misspellings showed up underlined in red, and right-clicking over it and then clicking the line would bring up a box with suggestions. Grammar and other issues, meanwhile, showed up in blue, and clicking the underlined text would do the same. We needed to right-click each time, though, as hovering to correct does not work as it does with Grammarly extension on Windows 10.

It’s hard for us to judge Microsoft Editor, as we couldn’t test it on WordPress for our writing, but many users have given it mixed reviews. When it comes to the extension, some have complained that it offers a dot for punctuation errors, which confuses users with a regular period. Others have also said that there isn’t an “Ignore this warning” setting like in Grammarly. To support our experience, there’s even a review that indicated that when compared to Grammarly, Microsoft Editor doesn’t work on all websites. The Microsoft Editor extension is still very much a work in progress.

Grammarly does it best

You also can customize the service to your liking. It has options for entering your own vocabulary into a custom dictionary. A bit similar to what we experienced with Microsoft Editor on Word, Grammarly also has an “Assistant” which can help you with conciseness, clarity, engagement, and delivery. It’s clearly much more useful than Microsoft Editor.  Grammarly can auto-correct words that you’ve frequently misspelled and there’s even a plagiarism detector and passive and active voice detector, which we don’t see in the current version of Microsoft Editor.

If you look at it, Microsoft Editor shouldn’t be seen too much as a “Grammarly-like” competitor. It’s really meant to add “bonus” value to Microsoft 365 subscriptions and help you get more bang for your buck. After all, we’ve long enjoyed spelling and grammar corrections in Word and the rest of the Office 365 suite. The features don’t compare, at least as of yet, and Grammarly is the way to go if you want to become a better writer.

We reached out to Grammarly for comment on this story, and a representative emailed us a copy of the company’s FAQ page.

Microsoft Teams calls integration is Slack is now available, but there’s a catch

The big rebrand but lots more: Here’s whats new with Microsoft 365 for March