At long last, Halo Infinite developer 343 Industries has invited select Halo Insiders to test the game’s first technical preview, which is now live on Xbox consoles and PC. As expected, this first beta is pretty light on content with players being only able to matchmake against AI-controlled bots, but there’s already a lot to like about Halo’s Infinite sandbox and general gameplay.

I’ve been testing the game today on an Xbox Series S connected to a 120Hz gaming monitor, and as a long-time Halo player, Halo Infinite felt instantly familiar. You’ll be greeted with the beloved Halo theme song when launching the test build, and the main menu features a fully-equipped Spartan with a beautiful Pelican dropship in the background.

This first technical preview only lets you choose between the Bot Slayer mode where you can fight off Marine-difficulty Bots with 3 teammates, or test 12 different weapons on static targets in the Weapon Drills mode. Classic Spartan weapons including the Automatic Rifle, Battle Rifle, and Magnum are all there, but there are a couple of new automatic weapons to discover including the VK78 commando and the Bulldog tactical shotgun. 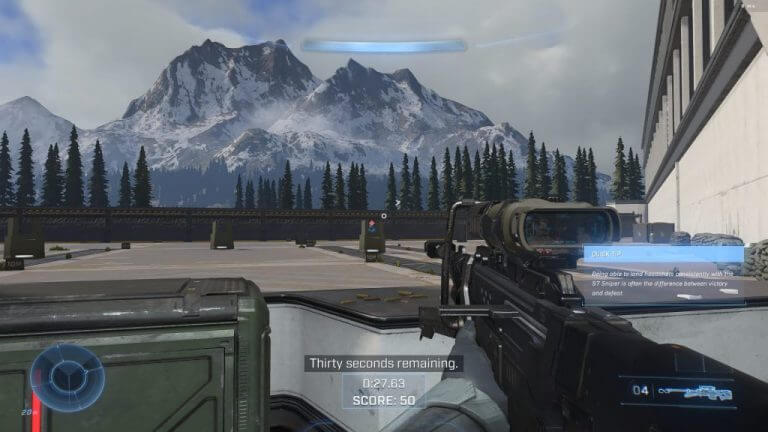 So far, I have spent most of my time in the Bot Slayer mode which as of this writing only offers a single map, but two other maps are expected to go live soon. The bots currently don’t offer a lot of challenge, but 343 Industries plans to upgrade them to ODST difficulty tomorrow afternoon. Hopefully, this should make this Bot Slayer mode more interesting for seasoned players as it's currently far too easy to crush these AI-controlled bots.

In many ways, Halo Infinite seems to address the biggest complaints from fans of the classic Bungie Halo games that didn’t really enjoy the previous Halo games from 343 Industries. Halo 5’s controversial Dash, Spartan Charge, and Ground Pound moves are all gone in Infinite, and the comeback to a more traditional boots-on-the-ground gameplay is probably for the best.

Halo 5 also received a lot of criticism for its unbalanced weapons, with most players ignoring the basic Assault Rifle in favor of the overpowered magnum in multiplayer. Well, I’m glad to report that Halo Infinite’s Assault Rifle is much more effective at both close and long-range distances, while the magnum is no longer one of the deadliest weapons in the game.

The sandbox in Halo Infinite’s Slayer mode brings back classic power weapons and accessories such as the Sniper Rifle, Overshield, and Camouflage, but I also had fun with the new Drop wall defense item that creates a transparent temporary shield you and your teammates can temporarily hide behind. Halo Infinite’s grenades remain just as effective as ever, and it’s still very satisfying to finish off enemies with a melee attack after destroying their shields with bullets.

You can find below a gameplay video of a full Bot Slayer match, and I did my best to showcase the different weapons and accessories available in the sandbox.

343 Industries developed a brand new Slipspace engine for Halo Infinite, and this probably had something to do with the game being in development for so long. I’m no graphics expert, but performance is very solid on Xbox Series S, though the game isn’t as detailed as I expected.

Overall, I’d say that the graphics quality on the Series S is on par with Halo 5 on the base Xbox One, which is good but not amazing. However, Halo 5 did use lower settings for its multiplayer mode to offer optimal performance, and I wouldn’t be surprised if Infinite did the same. Hopefully, the game’s campaign mode will look much better than what we're seeing here.

Halo Infinite on the Series S apparently runs at 120FPS on compatible monitors, but the Xbox Series X lets players choose between a 60 FPS Quality Mode and a 120FPS Performance mode. I didn’t get the chance to try the game on the Series X yet, but it apparently looks really good even in Performance mode. Unfortunately, PC performance seems to be disappointing on this first technical preview, but things should hopefully get better in future betas.

Because it’s a beta, be aware that you may encounter a couple of crashes during gameplay sessions. So far, it only happened to me once, but it’s worsened by the temporary ban you’ll get just as if you left a game early. It’s not fun having to wait for a couple of minutes before being able to get back into the game, but it is what it is.

A promising start, but we need more

So far, Halo Infinite has made a pretty strong impression on me and I can’t wait to play more against real players. "If we’re able to hit our target engagement and testing goals for the Bot Slayer before the flight concludes, we’re looking to enable a brief opportunity for some good old fashion 4v4 Social Arena Slayer,” 343 Industries teased earlier this week.

Halo Infinite definitely feels like the Halo I know and love, and I won’t be missing the Halo 5 gimmicks that made the game’s multiplayer an underwhelming experience. I also like the work 343 Industries has done on the audio, and Halo Infinite’s various weapons do sound better than ever. I hope to find this same attention to detail in the game’s cosmetic system, and you can already get an idea of how Halo Infinite’s Battle Pass will work in this first technical preview.

For the first time in the history of the series, Halo Infinite’s multiplayer will be free to play when it launches on Xbox and PC later this year. This is a great opportunity for Microsoft and 343 Industries to bring this 20 years old franchise to the masses, and Halo Infinite undoubtedly remains one of the most anticipated games of the year. This first technical preview is a nice taste of things to come, and I can’t wait to test my skills against real Spartans.

Microsoft Teams to get auto-delete meeting recording option in September