Can a Google Pixelbook Go serve as a Microsoft laptop?

With all of Microsoft’s cross-platform initiatives in 2019, you’re technically no longer limited to just Microsoft devices like a Surface. Generally speaking, the same Microsoft apps and services you enjoy on Windows 10 are also available across other platforms like iOS, macOS, and Android.

So with the recent wave of reviews and talks about Google’s new Pixelbook Go, I really wondered, can this cute little device serve as a “Microsoft” laptop keen to a Surface? With my Surface Pro X still on the way, I’ve been spending the last few days with it as my main laptop, and here’s the answer to that question, straight from the mouth of someone who is heavily integrated into Microsoft’s ecosystem.

A Microsoft laptop that’s all about the Google Play Store

Although Chrome OS was initially limited to the Chrome web browser and PWA apps, in recent times Google unlocked the platform’s true potential with access to the Google Play Store. Over the few days I’ve been spending with the Pixelbook Go, I realized that it is this that sort of makes the Pixelbook Go like a true Microsoft laptop. It essentially feels like the same way you could turn an Android Phone into a Microsoft Phone, just by using Microsoft apps.

Anyway, I quickly discovered that some of the core apps I typically use on my Windows 10 laptops are all available on Chrome OS. For me, this includes Microsoft Teams and Slack for work. Then, for personal use, there are the other Office 365 apps like Word, Excel, and PowerPoint. There are even some other Office 365 apps like OneDrive and Outlook. Other apps like Xbox are not available on Chrome OS, however.

In combination with my work in WordPress in the Chrome web browser, these apps get the same workflow I would on Windows 10. I’m able to write a draft of stories in Microsoft Word, respond to emails through the Outlook app, and keep in touch with colleagues across my two jobs with Slack and Teams. But, is it pretty as it is on a Windows 10 laptop? The short answer is No.

It’s great as a Microsoft laptop, but there are some limits

As great as having all these apps are, there’s one important point to note. Most Microsoft apps available on Chrome OS via the Google Play Store are simply just ports of Android apps. This means they’re not optimized for Chrome OS laptops and aren’t the full fledged desktop apps as seen on Windows 10. While you can use these apps to get your tasks done, in some cases, that also means they aren’t as powerful or feature complete. This could perhaps be a reason that many people can’t see the Pixelbook Go as a “Microsoft” laptop.

For instance, both the Microsoft Teams and Slack app offers me a different user interface and layout than it would on Windows 10. The overall experience of these apps is a bit similar to how it would appear it would appear if set my Android phone to landscape mode. Coming from using a Surface and Windows 10 as my main device, this was a bit frustrating. To switch between channels in Teams I constantly needed to press the back button, and head back to the main page. There’s also no sidebar from within the app, as is on Windows 10. Most times, I did find myself using the web versions of these apps instead.

Additionally, some of these Microsoft apps on the Chrome OS Google Play Store are not as fully-featured as they are on Windows 10. For instance, the OneNote application feels like an oversized Android app. There’s no dark mode support, you can’t resize the sidebar, and overall navigation and touch interface isn’t as intuitive as it is in Windows 10.

There’s even an integration with OneDrive in the ChromeOS Files Explorer when the OneDrive app is installed, but that too is limited. Unlike on Windows 10, you can’t drag and drop files between the OneDrive section of the Files app in Chrome OS. Files in OneDrive are stuck in a “Read Only” mode, though you can still right-click to copy them out to the download folder in the Chrome OS system. But to copy files to a OneDrive account, from Chrome OS you’ll still need to head to the dedicated OneDrive app. 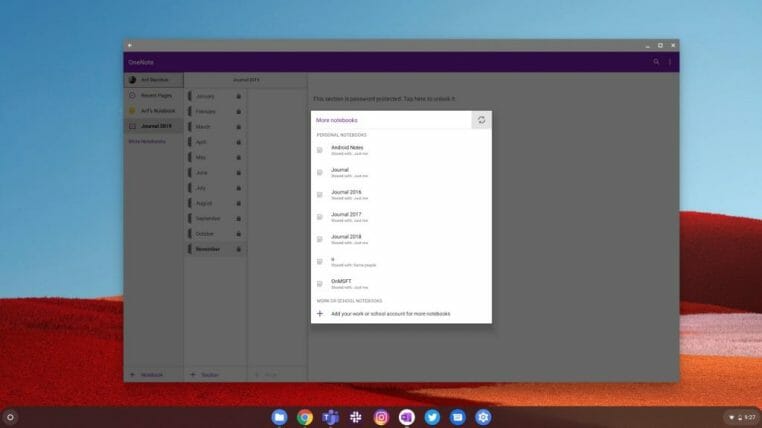 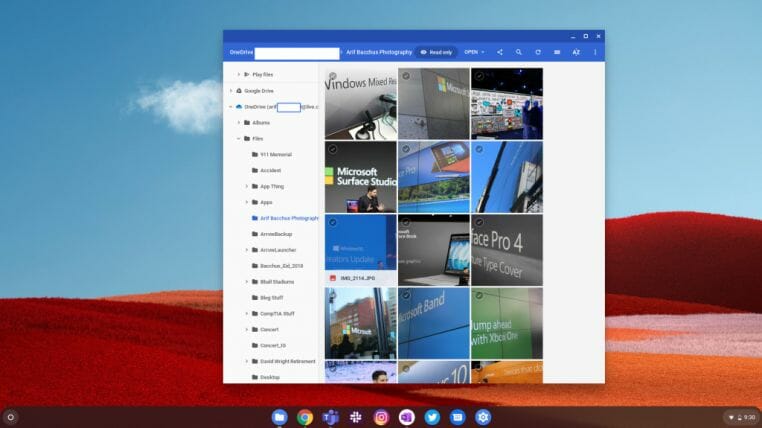 It even syncs up with your Android phone, and Timeline in Windows 10

Microsoft has made great progress with its Your Phone app on Windows 10. As we’ve extensively covered, you’re able to get texts, photos, and notifications from your Android device over on your PC. You even can see the items you’ve started on your Phone, on your PC with the power of Windows Timeline and the Microsoft Edge app. Quite obviously, these features are not present on a Pixelbook Go, but there are Google alternatives and workarounds for it for those hoping to use it as a “Microsoft laptop”

For one, the Google Messages app allows you to send and receive text messages from your Android phone on the Pixelbook Go or any other PC. Other apps from my Android phone  (like Snapchat, ESPN, Instagram) are also available on the Pixelbook Go, so if I log into these apps on the laptop, I’ll get the same notifications I normally would. As for my synced photos, when I opened up the OneDrive Android app on my Pixelbook Go, most of my photos from my phone that have been backed up to my OneDrive, appeared on my Pixelbook Go.

Finally, there’s the need to address Windows Timeline. While Timeline usually syncs up activities from Edge on mobile, it’s important to note that while the Edge browser is technically available on the Chrome OS Google Play Store, it is almost unusable. In my time, the app would install and launch, but it refused to navigate to webpages at all. This means that on the Pixelbook, you’re stuck with using Google Chrome. However, I did find that there is an extension that can be installed for Chrome on ChromeOS that will sync activities in Timeline. This means that the same websites I opened in Chrome, later appeared back on my Windows 10 PC, and even on my Android phone.

The hardware is just like a Windows 10 or Microsoft Laptop

Finally, there’s the need to address the physical hardware aspect of the story. Microsoft is known for its excellent hardware, and so is Google. So, does the Pixelbook Go have the same quality and feel like a premium Microsoft laptop or Surface? The answer is yes.

My full thoughts on the build quality and design of the Pixelbook Go are available over at my other job, but seeing as though I’m a Microsoft-fan, I think it’s just as good as anything Microsoft ever made. I’ve never quite seen a Windows laptop that’s quite as petite and compact as the Pixelbook Go. For a clamshell laptop, it feels very portable, slim, and light and is very curvy.

Overall, it really reminiscent of what you can get with a Surface Go. The screen, however, is bigger than what’s on the Surface Go, and there’s the clamshell format too. The keyboard is also much better than anything I’ve ever found on a Surface. Keys have a nice soft-feeling and there’s some bounce back when typing. 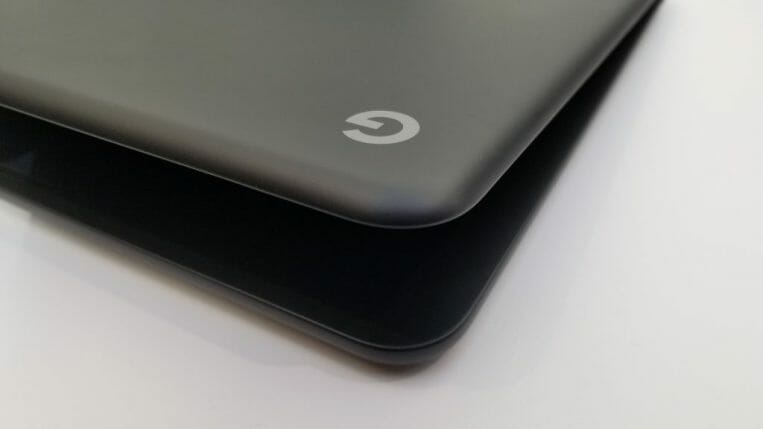 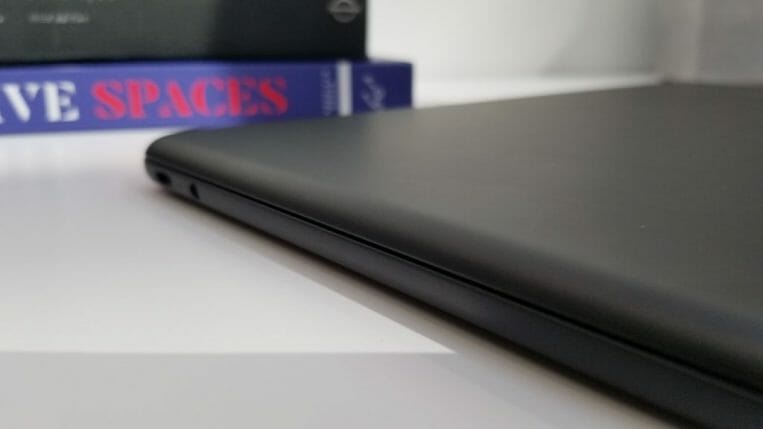 Unlike Microsoft which has stuck to strange gimmicks like an Alcantara keyboard to make it’s clamshell devices unique, Google really nailed the hardware aspect of the Pixelbook Go. In going back to a clamshell format, there are no gimmicks. Someone who is used to a traditional Windows 10 laptop can just pick one up and feel right at home.

The short answer is yes, depending on your needs

At the end of the day, I think the Pixelbook Go can serve as a Microsoft laptop if you really want it to. The apps and services you need are all there to enjoy everything Microsoft related, but you might run into some frustrations since you’ll be relying on Android and web experiences or apps.

It is perhaps similar to what Windows 10 Mobile fans once experienced when Microsoft gave up on the platform. You can move yourself to Google’s Android or Chrome OS, but only enjoy it if you stick to the Microsoft apps and services Google Play Store.

Putting it all together, you’re still using a Google product, and there’s nothing better than taking the $650 spent for Pixelbook Go and buying a real Windows 10 machine. You might even enjoy the Surface Pro X, which we’re planning to review next.