An in-depth guide to Windows Mixed Reality Home, your cliffside VR base of operations 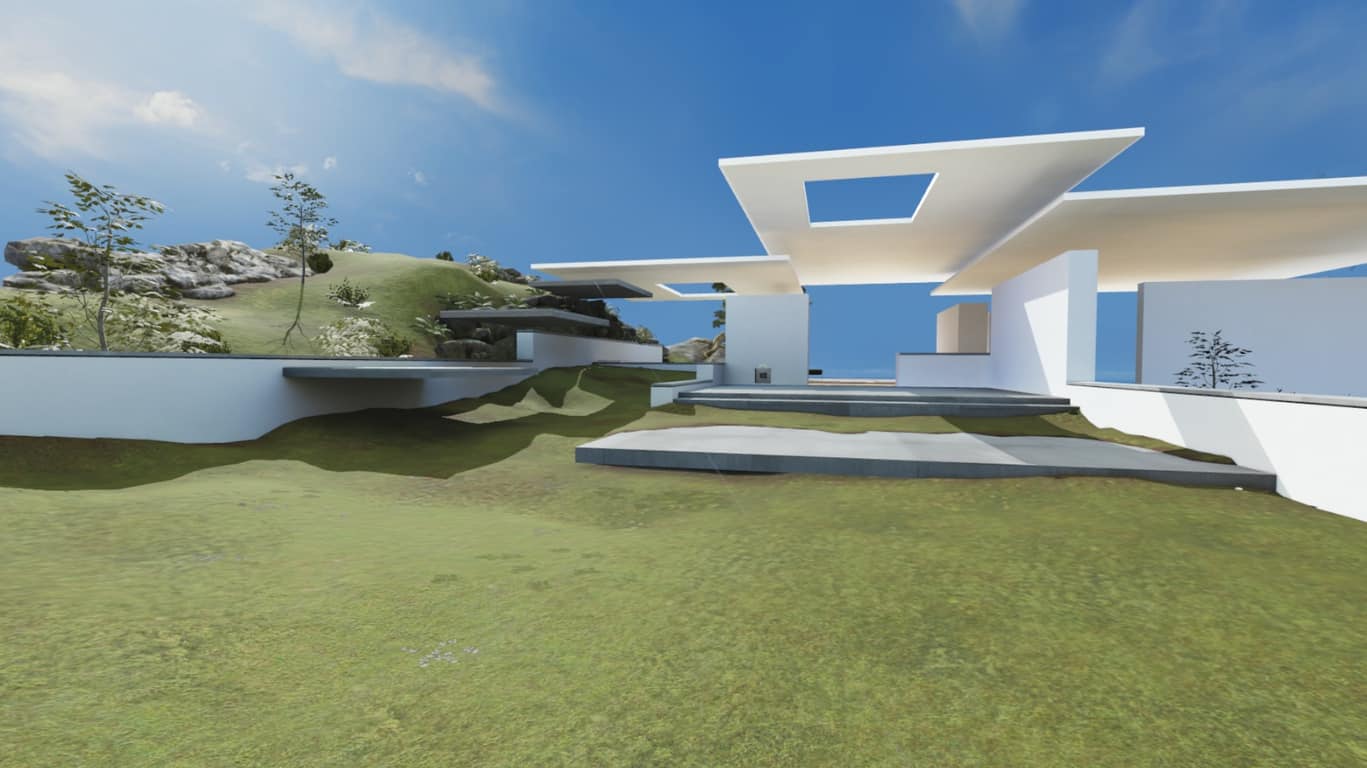 To navigate the Windows Mixed Reality Home, you can physically walk around after creating a room boundary during the initial headset set up the process. Physical steps in your own world will equate to physical steps in the virtual world. If you’ve connected a mic to your headset, you also can navigate by turning your head toward the place you want to go, and then saying “teleport.”

You also can teleport by using the left or right thumbsticks on the Mixed Reality motion controller and aiming towards where you want to go. If you’re using an Xbox gamepad, you can teleport by pushing the left thumbstick forward. With the mouse, you can move around by holding down the right-click mouse button in the direction you’d like to move.

You can launch some UWP apps in the Windows Mixed Reality world via a virtual 2D slate. Just press the Windows button on the motion controller (or on your keyboard) to bring up the start menu. On the main start menu, you will see a list of pinned apps, but you can also hover over to the right and press the select button on the controller when over All Apps. Once you’ve found your app on the list, hover over it, press the select button on the controller, and place it where you’d like in the room. Keep in mind, you can repeat the process and open multiple apps at the same time.

If an app opens up too small, you can resize it by using your motion controller and hovering over then selecting the box icon next to the X on the top right side of the window. You can then drag the app up and down by selecting the blue boxes to make it bigger or smaller. Alternatively, you can resize by pointing both motion controllers to the top bar of the app and then holding down the select button on the controllers, allowing you to also adjust the pitch or angle of the window.

Browsing the web and using the on-screen virtual keyboard:

An on-screen virtual keyboard will also pop up whenever the need to input text in Edge and other apps arises. To type out text, just hover over the desired letters using the motion controllers and then press the select button to input the text. Alternatively, if you’ve connected a mic, you also can press the mic icon to dictate text or say “Start Dictating” to speak your words instead of typing. Once done, say “stop dictating” or press the mic icon once more to complete dictation.

Some apps (like Holotour) are fully immersive and will not launch in 2D slates in the Windows Mixed Reality Home. These apps are instead launched via the start menu and then placed in the room. Once set, you can select the app to launch it in its own space. You can move around in these apps by walking around in the real world, and by even using the controllers. Once you’ve finished with the app, you can head back home by pressing the start menu button on the controller.

Since wearing a headset makes your PC a bit harder to use, to operate your PC desktop, you can open the desktop app from the Start Menu in Windows Mixed Reality. This app will open up a virtual 2D slate with your desktop. You can select items on the desktop by using select buttons on the motion controllers, input text by using the virtual keyboard and navigate the start menu and other pages using the touchpad on the controller.

The desktop app is a great way to access apps, games, and other content which are not compatible with Windows Mixed Reality, such as Spotify, the Windows 10 mail app, Google Chrome, and more. The apps and content open up just as they would as if you’ve connected to a monitor, so it’s a very cool experience.

Notifications in Windows Mixed Reality will pop up from the floor and into your line of sight. I’ve demoed a sample notification using the Notifications Visualizer app. You can interact with items in a notification by hovering over it and selecting using the controller, or dismiss it by using the (X) just as on standard Windows 10.

Scattered around the Windows Mixed Reality Home by default are furniture and decorations, but you can customize it to your liking at any time. To do this, directly open up the Holograms app from the Windows Mixed Reality start menu. By hovering and selecting the cliff home category, you can browse a collection of virtual items, including furniture, plants, and other accessories which you can place inside your space. You also can create 3D labels and put them where you’d like.  The sky is the limit, and you literally can customize your home until your heart finds it fit.

So, there you have it, folks, that was your guide to Windows Mixed Reality! There’s still plenty which can be experienced, including spatial audio (by opening up music or video apps and leaving the virtual room), Music (via Groove Music, at least for the time being,) and more. We hope you found our guide helpful, and invite you to explore your new headset and drop us a comment below with your thoughts and other comments on how the experience is going for you.