Windows 10 upgrade: Where misunderstanding and confusion has led to “accidental” installs

It’s been written ad nauseam that Microsoft has a Windows 10 update problem. When consumer complaints about upgrading transgress into headlines such as Windows 10 upgrade could cause Sudanese deaths are used as kindling in an ever-growing fire of anti-Windows hatred, Microsoft is now finding itself on the wrong side of a public relations wildfire.

From reports of upgrades downloading and installing onto personal and commercial desktops wholly independent of user intervention to installation processes sucking down exuberant internet bandwidth, Microsoft’s free Windows 10 operating system is costing more than expected for some users. 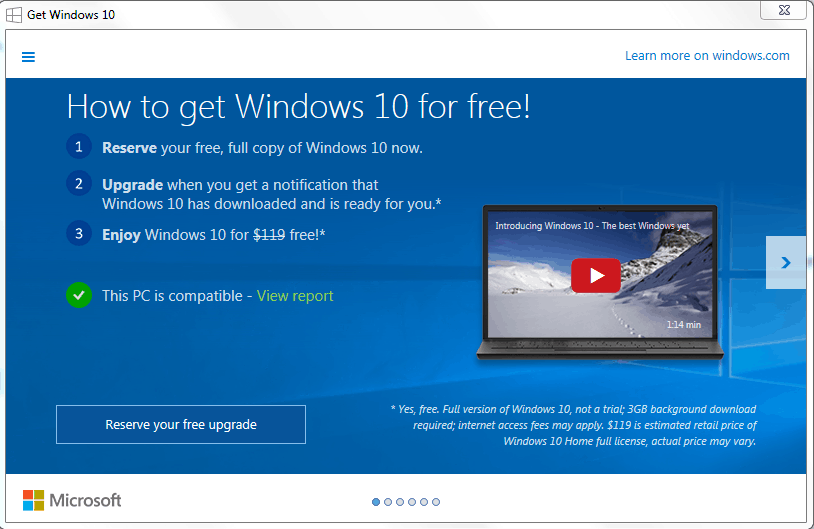 While the majority of user who make up the 300 million active Windows install base are content with Windows 10, some believe Microsoft’s upgrade is a nefarious undertaking executed by a barbarous company scrambling for relevance in an irrelevant industry. Others are a bit more forgiving, chalking up the mishaps to a woefully inept plan poorly enacted by a forever-bumbling enterprise.

However, there is a third, much smaller and soft-spoken group of people who see Microsoft’s supposed Windows 10 upgrade fiasco as an entirely different affair. At best, the Windows 10 upgrade is a calculated measure to bring an aging user base into a foundationally superior computing experience and at worst, a poorly timed enforcement of socially engineered practices that have coalesced as 30 years of misunderstandings.

To make heads or tails of the ongoing Windows 10 upgrade debacle I suggest taking a bird’s eye view of Microsoft’s predicament while making use of a litany of applicable quaint analogies to put things into perspective.

The red X isn’t your friend

When Microsoft released Windows 95 August 24, 1995, unbeknownst to itself, it ushered in subtle social engineering behavior that would blow up in the company’s face at the most inopportune time. Windows 95 brought more than just a visual overhaul, it brought with it, what I call “the red X of dismissal” to Windows users. The red X of dismissal was a clear and obvious way for Windows users to close programs within the operating system.

From the file explorer to Microsoft Paint, the red X of dismissal rested at the top left corner of any application as an anchor for program closing neophytes. To this day, Windows users make utility of the red X of dismissal as a quick way to close a prompt, an open window or a running application. Unfortunately, the imbued power given by users of the red X has led many astray, especially those suffering from supposed phantom Windows 10 installs. 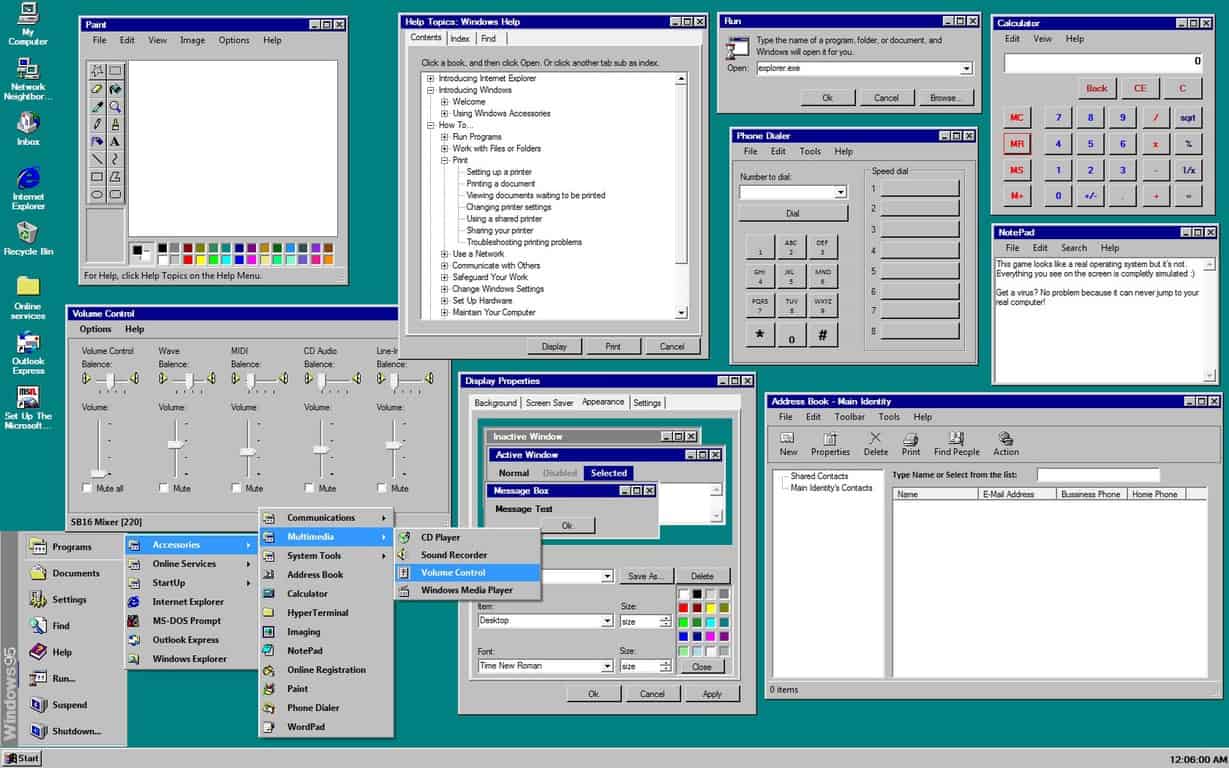 Many reports of unwanted Windows 10 installs involve a persistent use of the red X of dismissal as an immediately gratifying stop-gap measure to prevent the imminent installation of the free Windows 10 upgrade. Unfortunately, according to the end-user license agreement each and every Windows user is greeted with when installing or booting up a PC for the first time, the red X of dismissal is as effective as hand-pulling weeds.

6. Updates. The software periodically checks for system and app updates, and downloads and installs them for you. You may obtain updates only from Microsoft or authorized sources, and Microsoft may need to update your system to provide you with those updates. By accepting this agreement, you agree to receive these types of automatic updates without any additional notice.

If Windows 8 did anything correctly, it ushered in a new EULA that was intended to be more consumer legible. Going from dense almost indecipherable legalese to a much shorter and upfront agreement between Microsoft and its Windows users. Microsoft’s new Windows EULA spelled out what, who, when, where and how the operating system was intended to be used. Sadly, few ever saw this change due to an overwhelming visceral angst about installing Windows 8, but thankfully those who installed and set up Windows 7 saw a familiar prompt beyond the EULA. 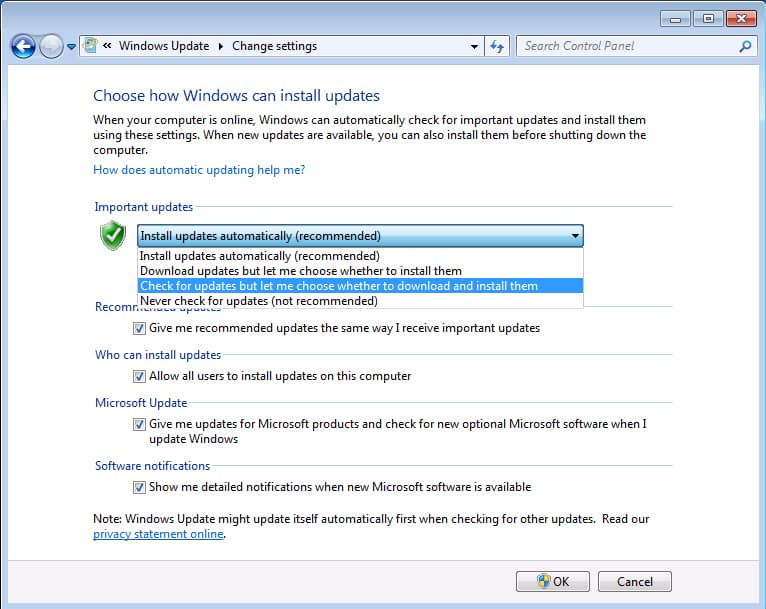 Even Microsoft understood the limited attention span its Windows users had when it came to reading EULA’s that explicitly explained that the operating system they were using would “periodically check for system and app updates.” Instead of solely relying on the EULA, Microsoft then began putting installation prompts front and center in the view of users.

A prompt would appear as users began setting up their copy of Windows 7, 8 and 10. Each prompt led to a screen that informed users they needed to designate how Windows updates would be handled. Windows users could choose from several options that ranged from passive deference to granular meddling when it came to how updates hit their devices. 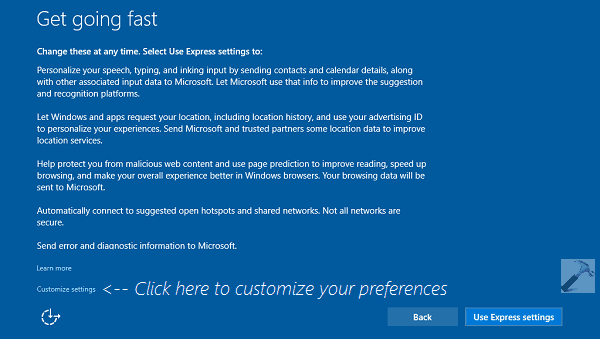 Putting the pieces together

So, Windows users have a EULA that accompanies their operating system and explains that periodic updates can and will be applied when available unless otherwise instructed. Windows users are also offered several settings in which they can determine when, how often and who (Windows or users) can apply updates. Lastly, Windows users are armed with the red X of dismissal, to ward off any further annoying reminders of a Windows 10 upgrade.

Where does it all go wrong?

The fundamental misunderstanding by users of what the red X of dismissal does has confused the process of how to actually cancel the Windows 10 upgrade. Granted Microsoft doesn’t go out of its way to highlight the cancellation option to users. As it stands now, the option remains an 8-point font copy with a highlighted click here section that resides smack dab in the middle of the upgrade prompt. Beyond selecting that click here option, nothing else will stop the juggernaut that is the Windows 10 upgrade. Hitting OK will only accepted the scheduled update and going to the trusty red X of dismissal will only dismiss the prompt for the time being, not cancel the upgrade.

Some would-be social justice warriors have even taken the time to meticulously go through Microsoft’s prompt guidelines in an attempt to dismiss user error as the company “breaking its own design rules.” An argument has been mounted that Microsoft recently changed the wording around its guidelines regarding the red X, switching its functionality from close or cancel to outright approval.

However, this spring — by March 23 at the latest, but perhaps earlier — Microsoft decided to redefine an X-click as approving the upgrade. “If you click on OK or on the red ‘X,’ you’re all set for the upgrade and there is nothing further to do [emphasis added],” stated a Microsoft support document on the auto-scheduling of the Windows 10 upgrade.

Although some argued that click-on-X was to be treated as a “Close” button, not an “Exit” button — the former makes the dialog vanish, while the latter cancels the under-consideration process — and implied that Microsoft did not violate its own design guidelines, that’s not correct.

At least not by Microsoft’s own documentation.

The argument is weak at best and dishonestly confusing at worst. No where does Microsoft claim or state that using the red X functionality will approve of anything. Instead, what the company does highlight is:

This notification means your Windows 10 upgrade will occur at the time indicated, unless you select either Upgrade now or “Click here to change upgrade schedule or cancel scheduled upgrade”. If you click on OK or on the red “X”, you’re all set for the upgrade and there is nothing further to do.

Read carefully, the Windows 10 upgrade prompt is a courtesy reminder that an update has ALREADY been scheduled. Clicking on the OK or red X essentially does nothing to stop the scheduled update, users are encouraged to click here to cancel the scheduled upgrade or intervene, NOT X. So, while Microsoft has changed its wording around the red X, is hasn’t changed its functionality. Microsoft’s new wording around the red X is equivalent to people saying, “the sky is blue” and then changing it to “the sky is still blue, when viewed through binoculars.” 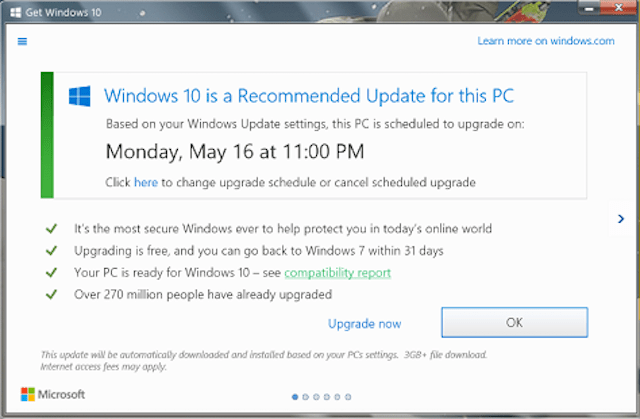 In an effort to bolster its user installs, Microsoft is leaning on a EULA that’s been in place for over thirty years that helps the company treat Windows 10’s free nature as a seemingly necessary update to the Windows system. In doing so, Microsoft can feel free to “periodically” check for Windows 10 and “download and install” it for users, all “without any additional notice.”

Combine Microsoft’s enforcement of its updated EULA language with the fact that most Windows 7, 8, and 10 users breeze through the installation process by selecting the “automatic” or “express” update process, the company is essentially able to run rough shod over the Windows 10 upgrade. Unless users were savvy enough to meticulously go through the “Advance” settings during their Windows 7 installation, to pick and choose when updates get applied, many find themselves at the mercy of the Windows 10 upgrade prompt.

So we see, using the red X of dismissal as an attempt to cancel the Windows 10 upgrade is a futile attempt at best and a sign of laziness at worst. The red X of dismissal has never canceled the actions of a program or app but merely closed out the window, this functionality has never changed. Microsoft, wrongly or right, has chosen to clamp down on the meaning of “update” to seemingly bolster its year one installation numbers.

To put things into perspective, the free Windows 10 upgrade is essentially an update for Windows 7 and 8 users. Similar to a firmware, cumulative, or critical update, Microsoft is treating Windows 10 as a necessary service and support update to an aging operating system. And like a support update, Microsoft is heavily suggesting that users download and install the update, perhaps to a fault.

Windows users are empowered to stop and cancel the Windows 10 update as they are to any other update to Windows, by taking the time to bump the OS off its fast track of automatic maintenance. Users who used the automatic or express settings when installing Windows 7 over seven years ago are now being confronted with their past decisions.

To make a poor analogy, Microsoft is the fabled imp-like creature Rumpelstiltskin who is coming to collect its promised first born child. Similar to the daughter of the lying miller in the story, the necessity to compute and the limited amount of operating system choices has put Windows users in a bind.

Agreeing to Micro-stilskin’s terms as is, most Windows users have essentially given up their first born in the form of seemingly losing the ability to ‘automatically’ cancel the Windows 10 upgrade. Micro-stilskin has waited in the shadows for years allowing Windows 7 years to blissfully go about their computing business unaware of the fine print in their contract. Unfortunately, Micro-stilskin has recently been cornered by market trade winds and massive industry shifts into calling upon its contract with Windows users to save itself. 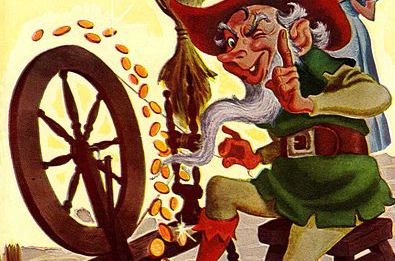 And just like the miller’s daughter, it is now it’s up to Windows users to arm themselves with the necessary information about their EULA and update settings configuration to ward of intrusive persisting of Micro-stilskin.

With a little less than a month until the end of Microsoft’s Windows 10 upgrade promotion and only a bit over 300 million installs of Windows 10 the company’s is enacting its last ditch effort to get the last few holdouts to join the fray. While distasteful to some, Microsoft’s seemingly aggressive update tactics for its free Windows 10 upgrade are nothing new. Hopefully, when the free upgrade promotion ends this July, Microsoft and Windows users can go back to their previously established ambivalence towards common rules.