Unboxing the new Docking Station for the Surface Book and Surface Pro 4 - OnMSFT.com Skip to content
We're hedging our bets! You can now follow OnMSFT.com on Mastadon or Tumblr! 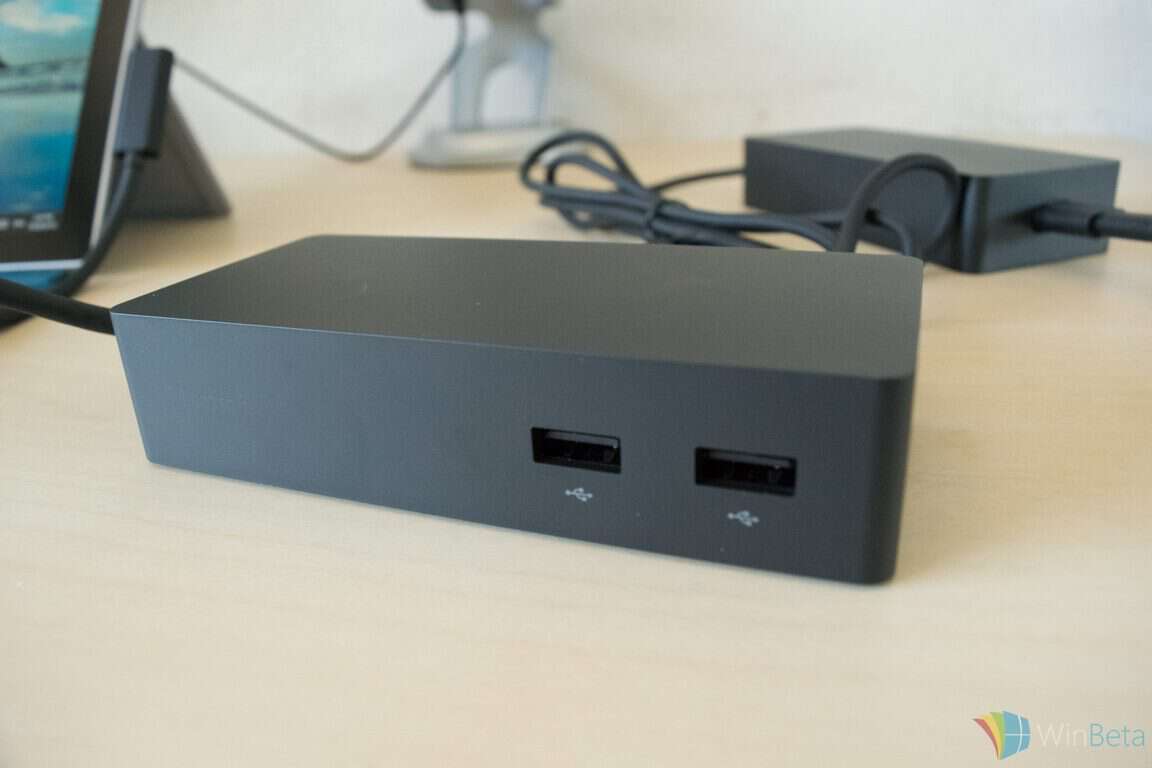 In addition to my new base model Surface Pro 4 and Type Cover purchases, I've also purchased the new Surface Docking Station. The new docking station breaks from tradition and completely rethinks how Surface docking should work.

Straight away the most obvious difference is the form factor. No longer is the dock some kind of exotic accessory tailored exclusively to one specific Surface model, but it is now a brick that attaches to the Surface device through a simple magnetic SurfaceConnect wire. What the new dock may lose in panache it gains massively in utility. The new dock is compatible with every device that uses the SurfaceConnect port: this includes the last generation Surface Pro 3, the new Surface Pro 4, and even the new Surface Book, and will likely include future generations of flagship Surface products for the foreseeable future. It also allows the user to use the Surface, kickstand and all, normally while docked.

This advantage is very important because it allows certain use cases that simply weren't possible with the older rigid design. In my case, it allows me to continue drawing on my Surface device at the ideal angle configured by the kickstand position. It also allows me to rest the Surface device on my lap against the table, for a more comfortable, relaxed drawing position. I salivate at the thought of drawing on my lap while my Surface is connected to two monitors, one monitor full of reference pictures, and another with a movie running and any number of social media apps tumbling through themselves in real-time.

Speaking of two monitors, another important addition to the new dock is that of a second mini-DisplayPort. The previous dock had only one, and required monitors to be daisy chained in order for the Surface device to use more than one external monitor. This was a pain as only newer, more cutting edge monitors supported daisy chaining, and one of the intrinsic benefits of have extra external monitors is the ability to take make good use of old equipment still lying around. This extra mini-DisplayPort should help alleviate this problem. I'm also curious if the Surface can also connect to a third monitor through it's own display port independent of the SurfaceConnect-ed docking ports. Only one way to find out.

Another advantage of the new dock's form factor is the size. The previous docks, many users have complained, took up a lot of space in desks, which was problematic for users with limited flat real estate. The new dock is just a tiny box that can be put hoisted anywhere convenient. In my case, I will likely be resting it on the stand underneath the screen of my monitor, as such it would be taking virtually no space on my desk.

One thing that disappoints me about the new dock is the separate power brick. Given the slightly restrictive lengths of the adjoining wires, having a separate power brick could make positioning the dock in some environments awkward, as there might be a heavy power brick dangling off the corner of a desk. I would've preferred if Microsoft found a way to incorporate the brick into a larger dock with more ports.

Look forward to my comprehensive review of the new docking station in the coming weeks.