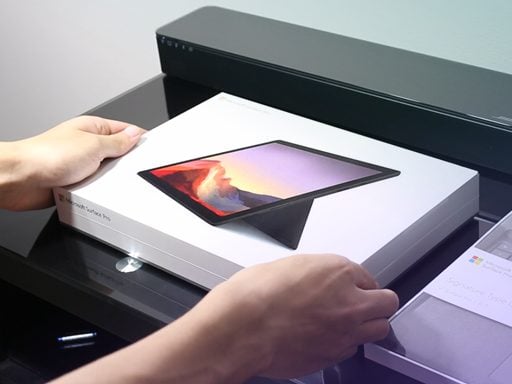 The Surface Pro 7 is the latest 2-in-one in Microsoft's device lineup this year, announced alongside the Surface Laptop 3 Surface Pro X. Though not much different than the previous generation, Surface Pro 7 features the long awaited USB-C port, as well as upgraded specs. Today we're unboxing the Surface Pro 7 and sharing some of our initial impressions.

This unit we're looking at features the Quad-core 10th Gen Intel® Core™ i7-1065G7 Processor, 16GB of LPDDR4x RAM, and 256GB of internal SSD storage. The Intel Iris Plus graphics paired with this years core i7 model is significantly more powerful than the Intel UHD 620 graphics found in the Surface Pro 6. Notably, all i7 consumer variants of the Surface Pro 7 come with 16GB of memory. Like the previous generation, the Surface Pro 7 has a 12.3" pen and touch enabled Display with a resolution of 2736 x 1824.

Looking around the sides of the device, we don't find much has changed from the last generation. Surface Pro 7 has exactly the same number of ports as before, however, the Surface Connect Plus port now supports fast charging, and the Mini DisplayPort has been replaced by a single USB type C connector. Unfortunately, there is no Thunderbolt 3 support as that is not something Microsoft has committed to on any of their surface devices. The addition of USB-C is definitely much appreciated and certainly is going to be a lot more useful than the Mini DisplayPort previous Surface devices have sported until this point.

...Testing consisted of full battery discharge with a mixture of active use and modern standby. The active use portion consists of (1) a web browsing test accessing 8 popular websites over multiple open tabs, (2) a productivity test utilizing Microsoft Word, PowerPoint, Excel and Outlook, and (3) a portion of time with the device in use with idle applications.

...Testing consisted of full battery discharge during video playback. All settings were default except: Wi-Fi was associated with a network and Auto-Brightness disabled. Battery life varies significantly with settings, usage, and other factors.

We'll have to do some more testing to say for sure whether or not battery life is something to be concerned about.

Another one of the key features Microsoft is advertising with the whole lineup of Surface devices this generation is 'Instant-on'. Instant-on is actually a feature contained within the new Intel processors found in these devices. With instant-on, these new Surface devices will be able to wake from sleep almost instantaneously, even after setting them down for several hours. Of course, we haven't been able to test this in depth yet, but we'll be making note of it's effectiveness in preparation for a full review.

You can check out Microsoft's official product page here.