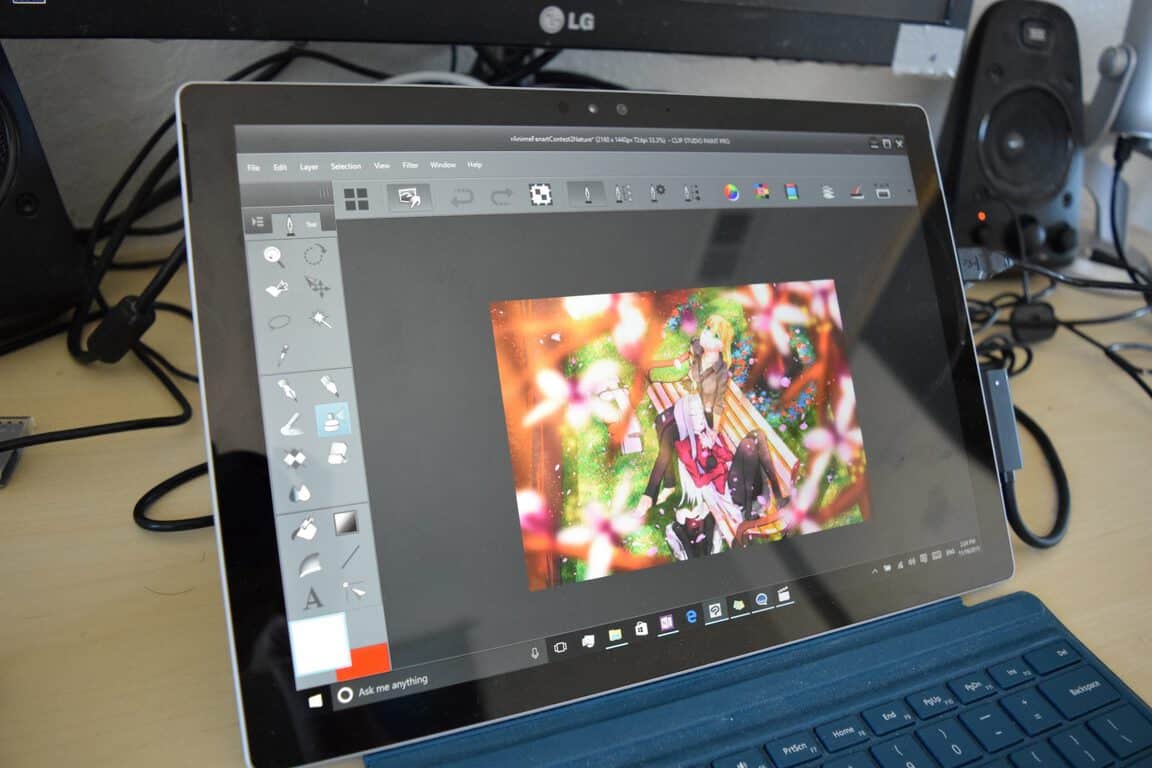 Thanks to the new PixelSense and G5 tech inside the Surface Pro 4, pen tracking is very responsive, with almost no discernable delay or latency during regular drawing. Normal sized brushes are handled easily, and huge layer counts have little effect on its responsiveness.

Where lag starts to show up (predictably, I might add) is with HUGE (at least 1000 px) brushes with high transparency, such as soft airbrushes or water color. While it makes painting at these sizes very unpleasant, it at least faithfully captures the stroke I make, no matter how long it takes to catch up.

Another aspect with noticeable delays is in magic wand selection, or any tool that relies on scanning large swaths of pixels. This obviously varies by image resolution. Smaller images are mostly unaffected. But with larger images, such as the 8192x8192 px featured in the video, one selection could take upward of 10 seconds. This can be massively annoying if one's workflow depends on magic wand selections. Of course, this kind of delay is nothing new to raster image editing on portable machines.

Multi-touch gesture navigation is a bit wonky. It's always responsive, and doesn't seem to be affected by varying image resolutions or layer counts, but it's never 100% smooth. I believe this is an issue with the way Clip Studio handles image zooming, and not really indicative of the base model Pro 4's performance potential, as I've seen a similar lack of smoothness on my former desktop computers.

I'd bet that the primary concern for most users interested in purchasing the base model is not the Core m3 processor, but in fact the paltry 4 GBs of RAM. Admittedly, I've only ever had three high resolution images open at once in any given session. However, the experience I've had was quite seamless. I had no discernable slowdowns (apart from the above), and have never been warned I was reaching the limit, even when doing heavy web browsing and movie watching simultaneously. I think one of the major reasons for this is thanks to Windows 10's memory compression, which you can read about here. The highest I've ever seen was 90% memory consumption.

All told, so long as you live modestly, neither RAM nor performance will be an issue.

So if you want to save money and buy the base model Surface Pro 4 for painting with Clip Studio, and are willing to live with some of the pen drawing issues, which I've alluded to in my initial review and will discuss more in-depth in the coming days, go for it. Programs like Clip Studio were designed to run on computers much weaker than the Surface Pro 4, and if I can do it on my Atom-based Surface 3, there's no reason you couldn't do it on the far more powerful Surface Pro 4. Have fun.

Lumia 950 XL sells out on Microsoft Store, next wave shipping by December 11