Earlier this week, Microsoft released an updated version of the Windows 10X Emulator Image, which is available now in the Microsoft Store. This Emulator Image (build 19578) no longer requires installation on an Insider Preview version of Windows 10, requiring only an up-to-date version of Windows 10 Pro and the Microsoft Emulator app. The emulator app has its own list of hardware and software requirements that haven’t changed since the last release. This software is intended for developers who want to begin testing their apps on Windows 10X before an official release.

Because this software is running on an emulator, performance won’t be anywhere near as smooth as if it were running on an actual machine.

Unfortunately for the average Windows Insider, there isn’t much new to see in this build of Windows 10X. Progress is progress, though. Action center now responds to your Windows theme properly, and more of the pre-installed apps have been updated to align with Microsoft’s new design language.

Another significant change in this build of Windows 10X is how the operating system handles windowing Win32-container apps. Win32 apps will open filling one screen and can be dragged to or spanned across the other. This change brings the windowing behavior in alignment with all other apps in Windows 10X. 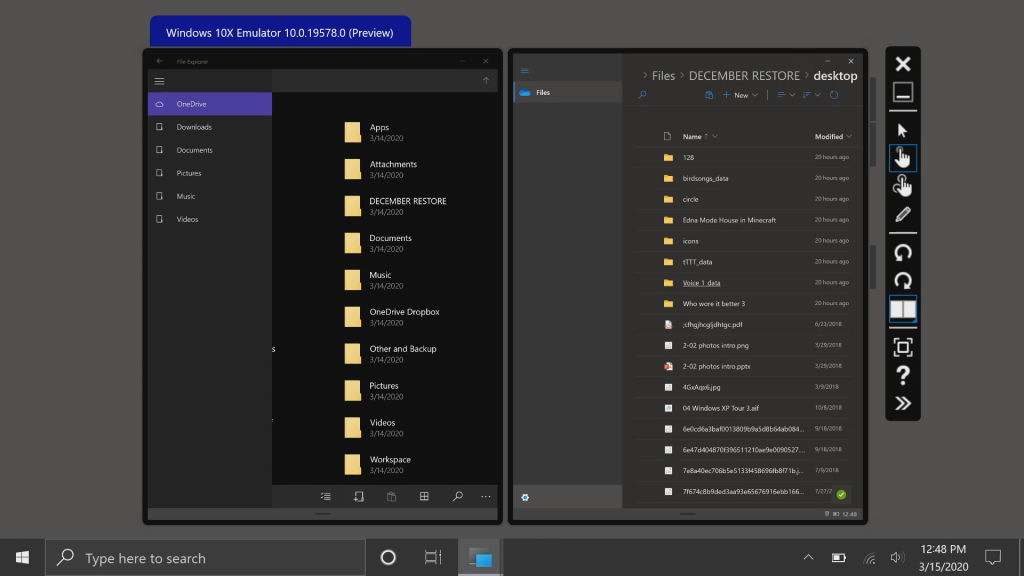 File Explorer (Beta) is the most significant new feature present in this build of Windows 10X. This new app can be found listed on the start menu in addition to the UWP file explorer we’ve seen already. At the moment, this new File Explorer is just a OneDrive app for Windows 10X. The app resembles the OneDrive web experience, using the same layout and icons when browsing through files. Unlike the OneDrive website, however, this app relies on the OneDrive sync client to function. The files you see here can be synced to local or online-only status, just like in Windows 10 for desktop.

At this point, the File Explorer (beta) app can’t view local directories and has fewer features than the UWP app that preceded it. Like other mobile operating systems, OneDrive sync will be a prominent feature of file management in Windows 10X.

Windows 10X is beginning to look like the modern mobile operating system Microsoft needs to stay competitive in the ever-changing world of personal computing devices. Windows 10 made up for Windows 8’s failure in the legacy desktop space, and never really focused on providing a good software experience for Mobile devices. It seems Windows 10X will try again what Windows 8 couldn’t achieve in mobile.