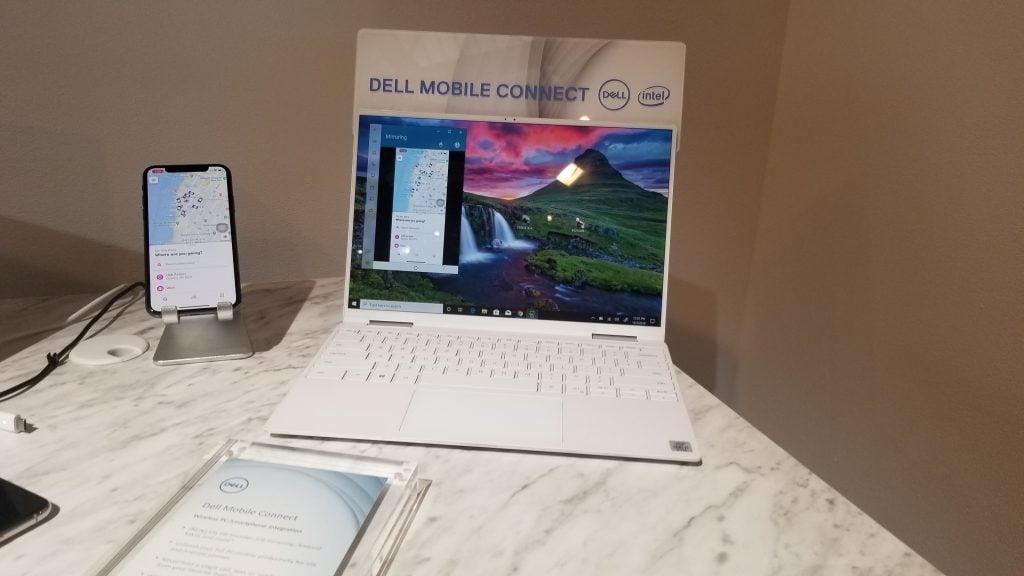 These days if you're sporting an Android or iPhone, you can get some awesome synergies between your Windows 10 PC thanks to the power of Microsoft's Your Phone app. But before the Your Phone app ever existed, there was Dell Mobile Connect, a product developed in partnership with Screenovate Technologies.

Similar to Your Phone, Dell Mobile Connect allows Dell's PC users to stay connected by bringing all the communications they care about from the phone onto their PC. In fact, Dell claims that over 1 million people have sent and received over 150 million phone calls and text messages using Dell Mobile Connect (DMC).

We've previously covered the differences between the two, but ahead of CES 2020, Dell is announcing an updated version of the app which makes the experience friendlier with iOS devices. I got to try it out, and I now think it feels better than Microsoft's current Your Phone experience.

I got to see (and play with) all these new iOS synergies in Dell Mobile Connect first hand during a brief demo at a pre-CES briefing. It was fairly amazing to see this many iOS synergies on a Windows 10 PC. As an ex-iPhone user, this felt especially cool ---having similar features that were once only working with Android. It's also something that admittedly is hard to do, especially considering the locked-down nature of Apple's ecosystem. 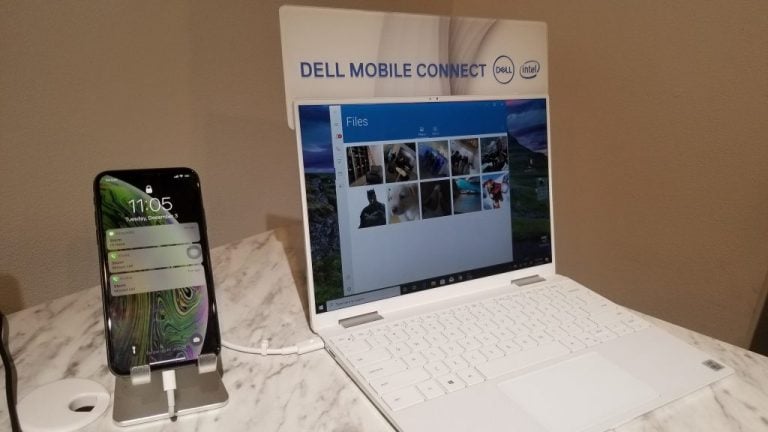 Message syncing made easy and file transfers now on iOS too

Just as I've covered before, Microsoft's Your Phone app doesn't allow for the syncing of messages or photos between Windows 10 and iPhones. So, with the updated version of Dell Mobile connect, Dell really one-ups Microsoft.

To begin our tour, a Dell representative showed us a simulated situation how he was able to call his friend and have the friend answer his iPhone from his Dell Windows 10 PC. He then simulated his friend answering the phone.  When the call was answered through Dell Mobile Connect, the PC essentially became a speakerphone, similar to how it works with Phone Calling in Your Phone. He didn't need to touch his iPhone to answer the call. 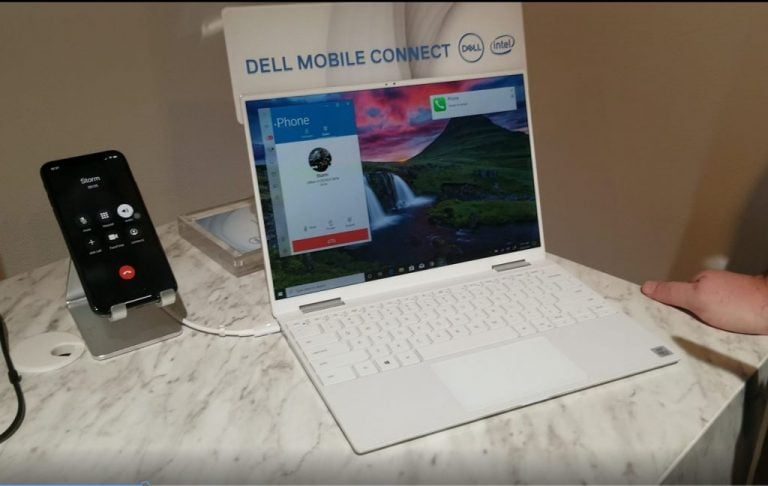 The representative then shifted and showed us that text messages or iMessages on an iPhone could sync up to a Dell Windows 10 PC as well. He simulated a situation where he texted a friend, and the message appeared on his friend's PC screen. He even showed how his friend could reply to the message through Dell Mobile Connect, without having to keep his iPhone screen on. Previously, the screen needed to be on for this to happen.

But that wasn't all that was cool. Dell told us that these were just the basic features of the application. I saw that iPhone users could also now wirelessly drag and drop photos between their device and Dell Windows 10 PCs. In this situation, a photo the rep had taken earlier from his iPhone was showing up in the DMC app. He double-clicked it from within DMC to show it to me, and he then quickly dragged it out to the app and onto the desktop.

Just like the Android integrations with Your Phone in Windows 10, it was like magic. However, there are some important differences that give Dell an advantage. First of all, Dell Mobile Connect allows users to transfer an unlimited number of files, whereas Microsoft's Your Phone only shows the last 25. Multiple file types, including videos, music, and document file types are supported on DMC, and you can transfer both ways, bi-directionally from PC to phone, and from phone to PC. Dell even has worked to include support for GIFS and MMS on both iPhone and Android, which brings it closer to Your Phone.

Moving on, Dell Mobile connect also supports Android's group messaging feature, which shows the SMS conversations just as it shows on the phone. This is something that isn't necessarily supported in Your Phone. Finally, the Internet is also not a requirement, and file transfers can work even when there is no internet connection available.

Dell Mobile connect still only works on Dell XPS, Inspiron, Vostro, and Alienware PCs or laptops purchased after January 2018, but this really is something Microsoft could learn from. Our world is surrounded by both iOS and Android devices, and it's really important to play nice with both solutions. 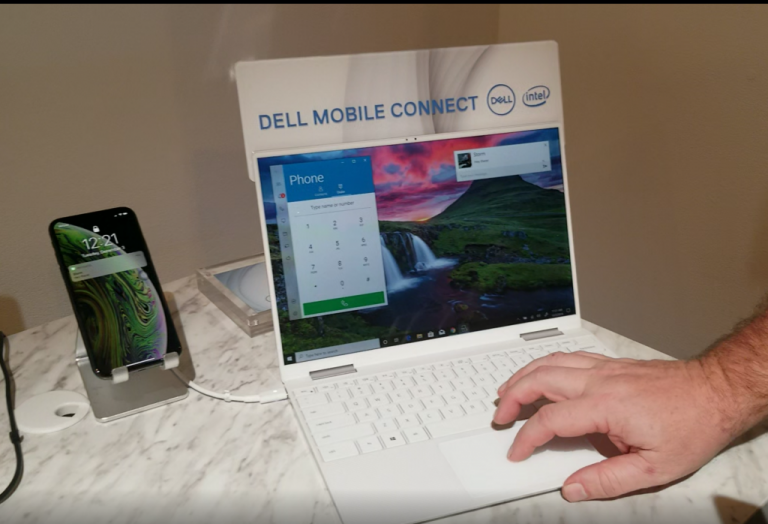 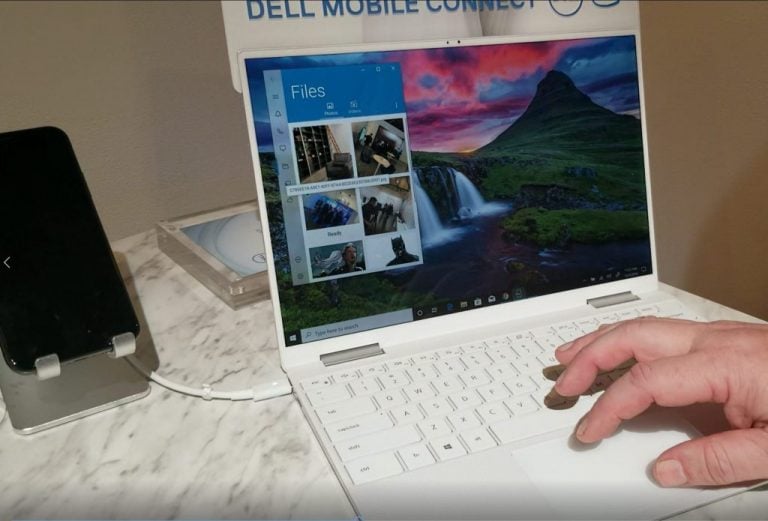 Screen mirroring on iOS is the real strength

Having the ability to see text messages, photos, and calls from an iOS device on a Dell PC via Dell Mobile Connect is quite cool. However, the real strength is the screen mirroring feature. Again, this is something that has been available with Android on Dell Mobile Connect for a while, but now, the iOS version is in parity with it. It's also a feature that can be quite important for some people, as it will help you avoid the need to switch between phone and PC.

When a Dell rep walked us through a demo of the screen mirroring feature, it worked just as seamlessly as it does with Your Phone. He initiated the screen mirroring session through the Dell Mobile Connect app on Windows 10, and then via the secondary app on the iPhone. Once he accepted the prompt on the iPhone, everything on his iPhone appeared on his Dell PC. I saw the iOS Home screen, the Lyft app, and even iMessage in action, right from his Windows 10 PC. The keyboard and the mouse and touchscreen on the PC even worked for controlling the iPhone, which was quite mindblowing. 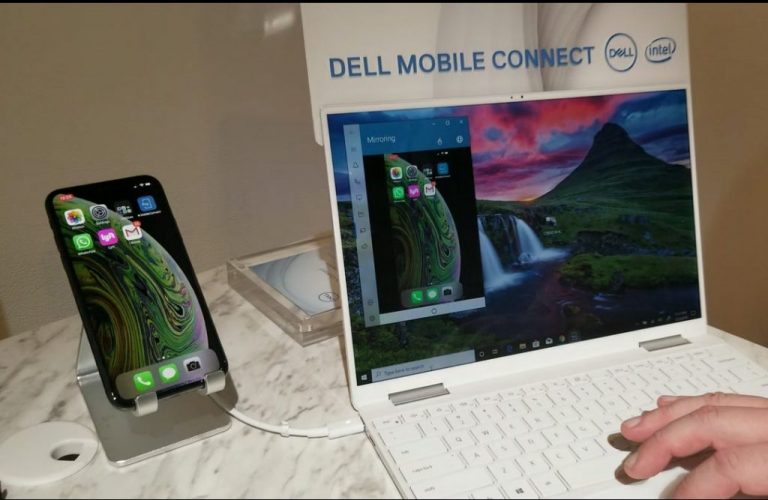 In addition to the iOS support, another key feature that makes Dell Mobile Connect better than Your Phone on Windows 10 is the connectivity element. Currently, Your Phone on Windows 10 has no peer-to-peer capability. This means that it is depending on having the two devices connected on the same router when on WiFi. Some features, like mirroring, might also suffer depending on the distance to a router, and might not work at all in places where networks are isolated like in coffee shops. Dell Mobile connect currently supports this peer-to-peer feature and uses WiFi, WiFi Direct, Bluetooth, BLE, and LTE connectivity channels (and for some offline functions too.) This all helps make these obstacles from Your Phone irrelevant. 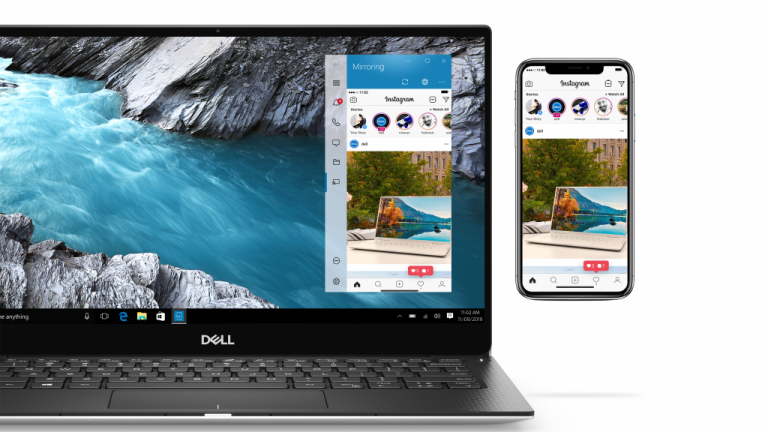 You're able to get all the Dell Mobile Connect features, regardless of which phone you own

As we touched on before, Microsoft's Your Phone app is still technically a work in progress, so some of its full-on features (like screen mirroring) are only available on select Samsung phones or in beta testing Windows Insiders. Dell Mobile Connect, however, doesn't have this bias. It supports all Android phones, and iPhones and does not discriminate between the different Android phones out there, providing full coverage to Dell PC users.

Also, while it is true that Dell Mobile Connect is only available for free on all consumer Windows 10 XPS, Inspiron, Vostro, and Alienware PCs or laptops purchased after January 2018, there's also the need to address the nature of availability between both PC and Phones. Your Phone falls very short in this area the solution doesn’t support iPhones to the same extent as DMC. Essentially, if you're an iPhone user, you're out of luck if you're hoping to get a synergy between your PC and your phone with Your Phone. But, if you're a Dell user, Dell Mobile connect is hands-down, the better of the two solutions. 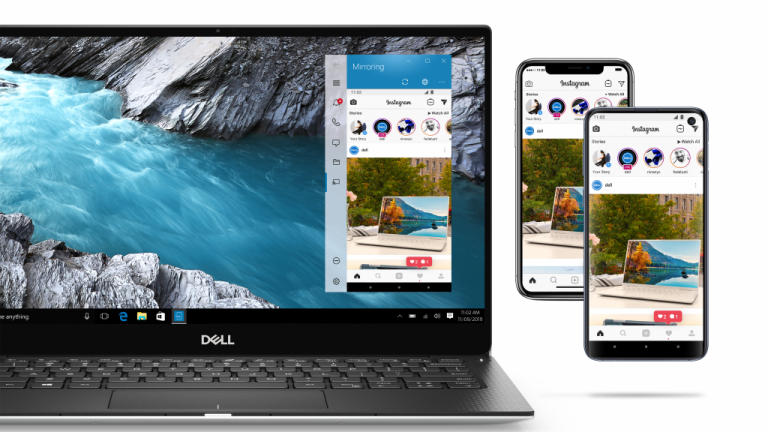 Dell looks to win iPhone users, and maybe me too

With the improved and new integrations in Dell Mobile Connect, Dell is looking to win over iPhone users. Compared to Your Phone on Windows 10, Dell users have a more complete phone and Windows 10 synergy, regardless of which device their own. Dell clearly has worked to ensure that its product has a nice set of features and a great user experience. In fact, it even has worked on Windows10S support, as well as many other performance enhancements under the hood to make sure its experience is solid.

As someone who switched to Android just to enjoy the synergies with Your Phone in Windows 10, I might just switch back to an iPhone thanks to Dell Mobile connect. It now does everything Your Phone does, but better. Texts, Calls, Notifications, Phone Mirroring, File Transfers, it's all now there on iOS with Dell Mobile Connect, and I am quite glad.

Dell XPS 13 Hands On: Almost all screen, and almost no bezel

Want to get the most out of Microsoft Teams meetings? Here's how to multitask and take Meeting Notes