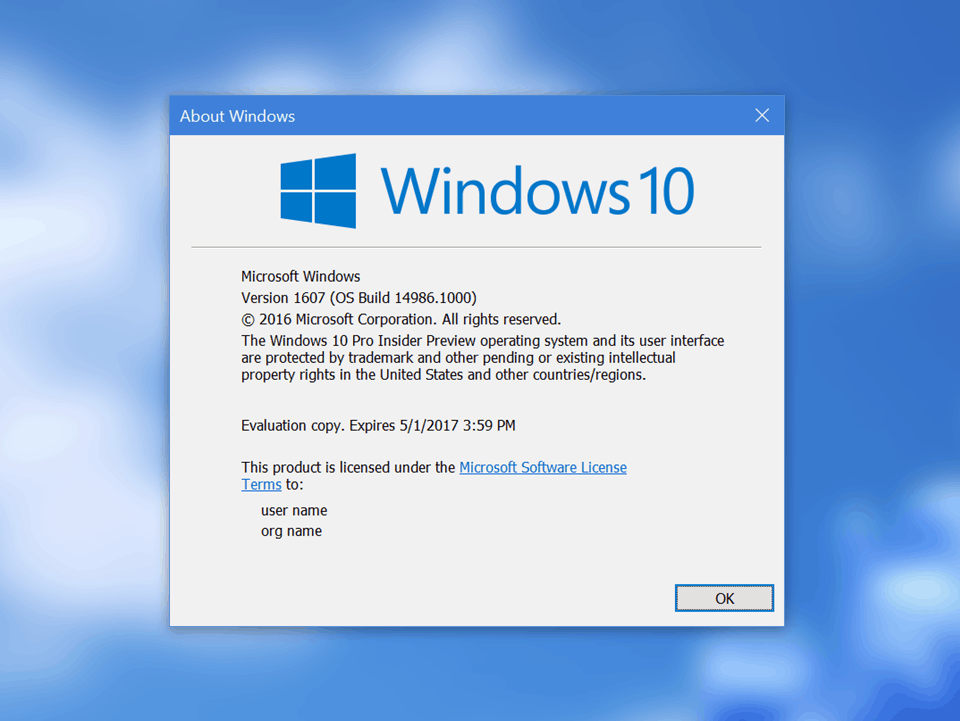 Hey there everybody, it's me Cody On Microsoft where today I'll showing you Windows 10 build 14986 for PC.

Of the list of known problems in the last build, many of the more notable ones have been fixed. The issue I took note of in the last fast ring release where the new Virtual Trackpad's buttons would not work is an example of one of these.

Like we saw in the last mobile build, there have been updates to the Rendering Technology for UWP apps in this build.

"Please provide feedback through the Feedback hub if you notice any new visual glitches in UWP apps. For additional context on this change, we are now widely using the same Windows.UI.composition API that app developers have access to for XAML UWP app and shell rendering."

Cortana seems to have gotten the most attention in this build, with several new voice commands that let you control your music and system volume through dictation. These and more can also now be accessed from the lock screen with a lovely new lock screen design, that's aimed at making it easy to see what Cortana is showing you when you're talking to her from across the room. I also noticed that there's a new Mic icon on the taskbar.

Unlike most other commands that we've seen already, these new ones don't seem to work when just typing them into the search box. To use them you have dictate using your voice.

These new commands include:

It’s all a bit buggy, but still interesting.

For people who are using PC's owned by their work or school, Cortana can now be logged into using an Azure Active Directory Identity. In the case that the administrators of the organization who manages your work/school device doesn't allow for MSA, you can log in using the account they provided instead.

You can't go wrong with settings. Windows 10 build 14986 brings a variety of new settings options beyond what I've already discussed as well. The taskbar settings shortcut is now more appropriately named "taskbar settings" as opposed to just "settings" as of before, which was more confusing

You can of course continue to browse through the settings app like always without any issues, for instance the battery section won't crash the app anymore (huzzah).

Some design aspects of the settings app have been modified as well, your full screen search results display with smaller icons in a list, allowing you to view more items than before. This is nice for finding your way to a page with many similar names, such as storage. You'll notice here too that the storage section looks a bit odd… you'll see my OS drive partition here… and that's all. This is because the default save location settings have been moved to their own page. I don't know if I really agree with this, there’s a lot of empty space that could just as easily been filled with these settings, but, I guess Microsoft has some plans for this section to push it ever further to the long-awaited death of the control panel.

More on Azure cloud service support, there is now an option to add Enterprise Cloud Printers to a device by searching for it in the settings. Note though that the backend to this feature has not been completed yet, so will not work as of right now. When it does become available though, it can be configured by your IT administrator.

The Windows game bar is getting support for more full screen 3D games with this build, and should now open without question.

You can configure these games with the game bar how you like, to get the best performance, and most convenient controls for recording and taking screenshots of your gameplay.

After installing this build, if you restart your PC once, you should be able to find a new 'windows defender' app when searching for it in Cortana… you'll select the second option, which is displayed with a little windows logo rather than a shield. This is a brand-new app, which is still very early into development. It seems like the app is going to become the security hub for windows users, with access to things like Virus and threat protection, windows firewall settings, and family options, a sort of parental control center. The hub also has a dead little settings icon in the bottom which doesn't open to anything, but I imagine that this will probably lead into some administrative settings that are for the app itself rather than any of the specific things that the app covers for.

With Windows Ink, as well as the new tweaks in build 14986, the windows Ink experience is better than before. You don't have to worry anymore about accidentally or unfortunately losing a sketch while working in windows ink. A 'resume previous sketch' button has been added to the list of controls in the upper right, allowing you to quickly jump to the last sketch you were working on in Windows ink, say if something were to have caused the Windows Ink Workspace to crash. That and you can flip between two sketches at once if you want to play things risky.

Also in the UI, the pen size visual has been made much more helpful, showing a preview of the stroke size as opposed to just a dot; which wasn't really all that helpful. I wish that it would show a taper on the stroke preview if clicked on using a device that supports pressure sensitive input, such as the surface Pen. Using the Surface Pen in this build will no longer show the cursor while inking, which makes for a much more natural feel.

The registry editor recently has been getting a lot of experience modifications lately, with the super useful address bar that was added a few builds ago, and now, again, some new keyboard navigation controls. For people familiar with navigating through levels of directories in File explorer using keyboard shortcuts, you’ll already be very comfortable with their addition into the registry editor. Commands such as (alt+up arrow) will allow you to navigate up, and (alt+left/right arrow) to navigate forwards or backwards.

For those who work with Audio out there, or those, who like me who use a USB audio device, note that in build 14986, the Microsoft class driver for devices that support the USB audio 2.0 standard is being prioritized over any third-party drivers that may have come with your Audio Devices. This, as being in the Windows Insider program to begin with, implies that Microsoft is trying to get some testing with these new drivers, to get feedback on any remaining bugs that remain with it.

If this is of concern to you, you can always switch back to your device specific driver.

Before installing, please note that builds released through the Windows Insider program should not be viewed as an expedited update route. These builds are buggy, and you should probably think twice before installing them on your main device.

Microsoft hikes the price of Office 365 Home in India