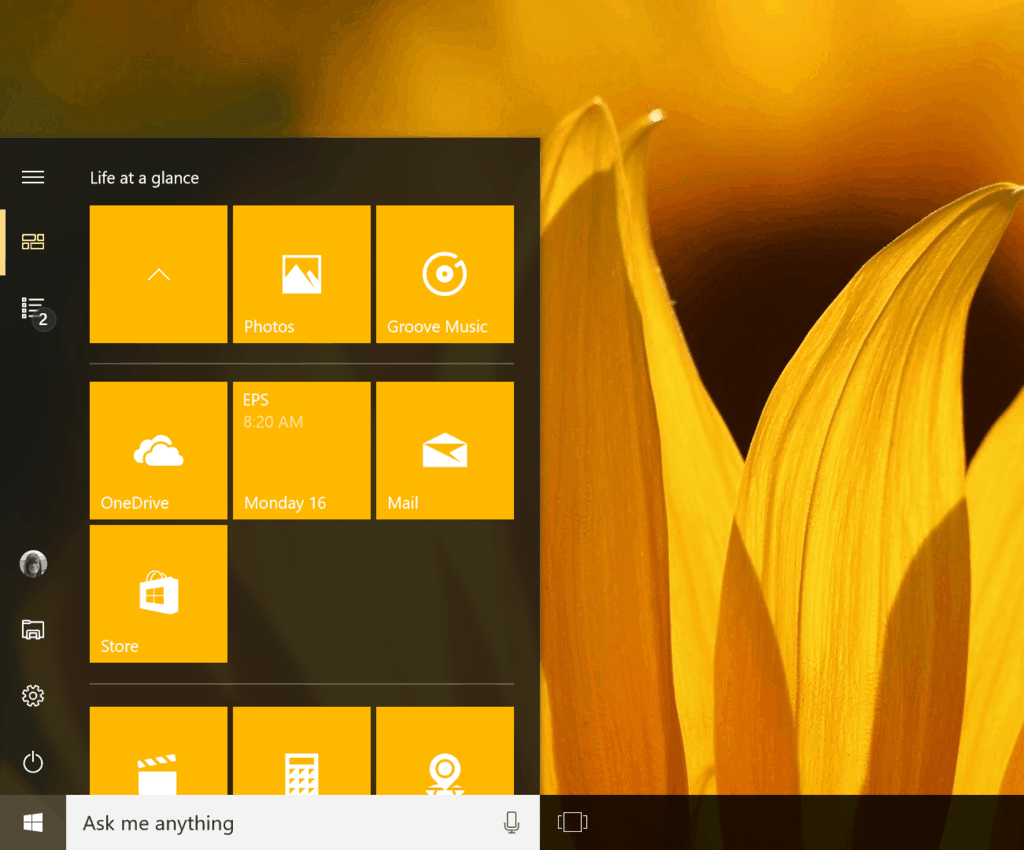 Hey there everybody, it's me Cody On Microsoft where today I'll showing you Windows 10 build 15002 for PC.

This build is the latest fast ring build for windows insiders as part of the creators update, which is expected to come out some time spring of next year. I will note that these builds are buggy, and I wouldn't recommend installing them onto your main device.

We've already seen Edge blocking sites marked as malicious, but Edge now will also start blocking untrusted Flash content unless you specifically allow the page to run that content. Developers will also be able to look into the new Payment Request API that's supported by Edge. This isn't completely finished yet, so you won't be able to test it, but you will eventually start seeing sites utilizing this API, which will help manage payment information for you through your Microsoft wallet.

Now, tab management; the bane of everyone's existence. You will notice right away that there are several new buttons up in the title bar. Tab preview pulls down the previews of all the tabs you have open so you can see them at once, a feature that I'm sure all of you have seen before 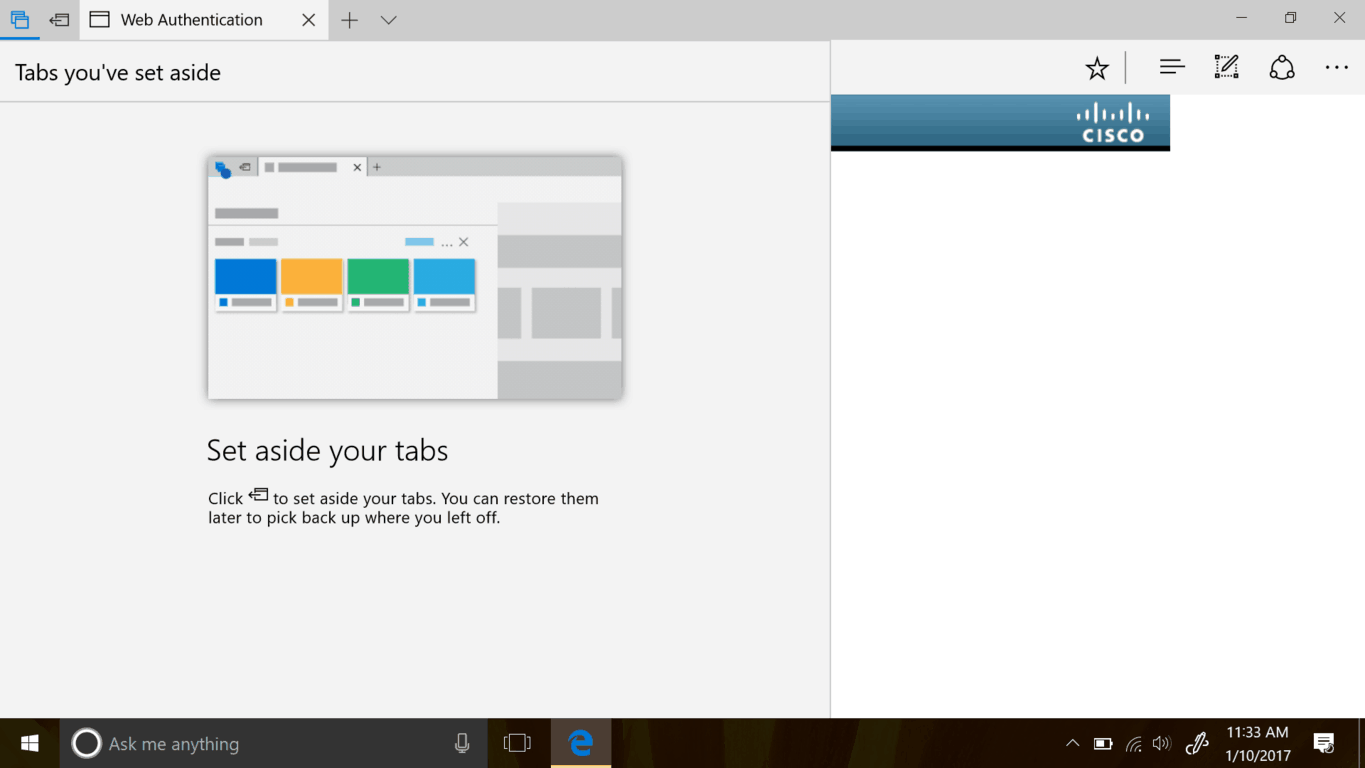 On the very left of the title bar, you will also find two extra icons. These are part of a new system called 'setting tabs aside'. The second button from the left here sets tabs aside, so all the tabs that you have open will be whisked away into this other section here to the left.  Note that tabs set aside aren't loaded, and will remain set aside when you close out Edge and open it back up again. Clicking on the set aside tabs will load them back up again, or you could just restore all of them, which will pile them all back onto your current session. The UI is pretty self explanatory though beyond that.

Setting tabs aside is for situations where you might need to keep a set of tabs for something later, but want to have a separate clean tab experience for something else.

Or, if you think that that's really stupid, you can of course now open an entirely new Edge window by right clicking the edge icon on the taskbar.

Another thing you're probably aware that when Edge crashes or closes unexpectedly, opening it up again will bring back all the tabs that you had open in your last session. Now I've noticed that when opening Edge back up again it will ask you in a new tab whether or not you want to close all those tabs from your last browsing session.

Also, While I'm in Edge, (might as well)… this build finally has that new share UI that we've been hearing all about finished up. Clicking the share button in whatever app will now open up this nice little share panel rather than the Windows 8 style side panel that opened up before. It works just like you would expect, just by clicking on an app you would like to share to and huzzah. They've got it.

Speaking of old things, Windows 10 has yet another screenshot key combo. In addition to Print screen, win+print screen, volume down+win, and function+windows+space… win+Shift+S will now open a screen clipper that will allow you to copy a certain area of your screen to the clipboard.

The start menu has with this build received a feature Windows users have been asking for since Windows 8. Folders for pinned apps on the start screen. Huzzah. It works and feels just like app folders on Windows 10 Mobile in Continuum, simply drag an app on top of another app and boom; You have yourself a folder.

I imagine this would be nice for organizing large suites of software with multiple independent programs, like Microsoft Office or the Adobe suite. That in mind, I really think that you should be able to drag a folder from the app list onto the right pane and pin it, in the same way you can drag apps to pin them. You cannot drag anything from the app list to pin them in this build, which seems to be a bug.

I've noticed that these builds have been paying particularly close attention to Chinese language support lately. Nobody would oppose, as translating a writing system into UI designed for another can be difficult. I will skip over these changes for now though because I don't speak Chinese, and I would have a hard time communicating to any Chinese audience about these changes.

General accessibility across the board, from enhanced speech and narrator support to braille and high contrast. All changes to language and accessibility with the ultimate goal of making windows as easy to use for anyone, despite their linguistic or physical differences - not particularly easy.

For anyone who uses the narrator regularly, the keyboard hotkey for opening Windows Narrator has been changed to control+windows+enter.

Ease of navigation is being brought into Windows Settings with a new pane on the right which suggests things based off of what section you're currently exploring. Sections like the new Bluetooth and other devices section, which manages all the different devices you have connected to your PC.

If you have a Surface Dial, you would also be able to explore some new options in the wheel section of the settings app, with the ability to set custom commands to individual apps and things to certain wheel clicks.

The display section has also been changed up a bit, with some of the more commonly changed setting brought up front, such as the display resolution now being on the first page.

A little bit farther up here if you haven't spotted it already is an option for a reduced blue light mode. You've probably started hearing about it more lately, with desktop programs like 'f.lux' or iOS 10's 'night shift' toggle.

For those who aren't aware, basically what this does is makes the color temperature of the display warmer, filtering out blue light that in the dark can mess up your sleep cycle or put a lot of extra strain on your eyes. 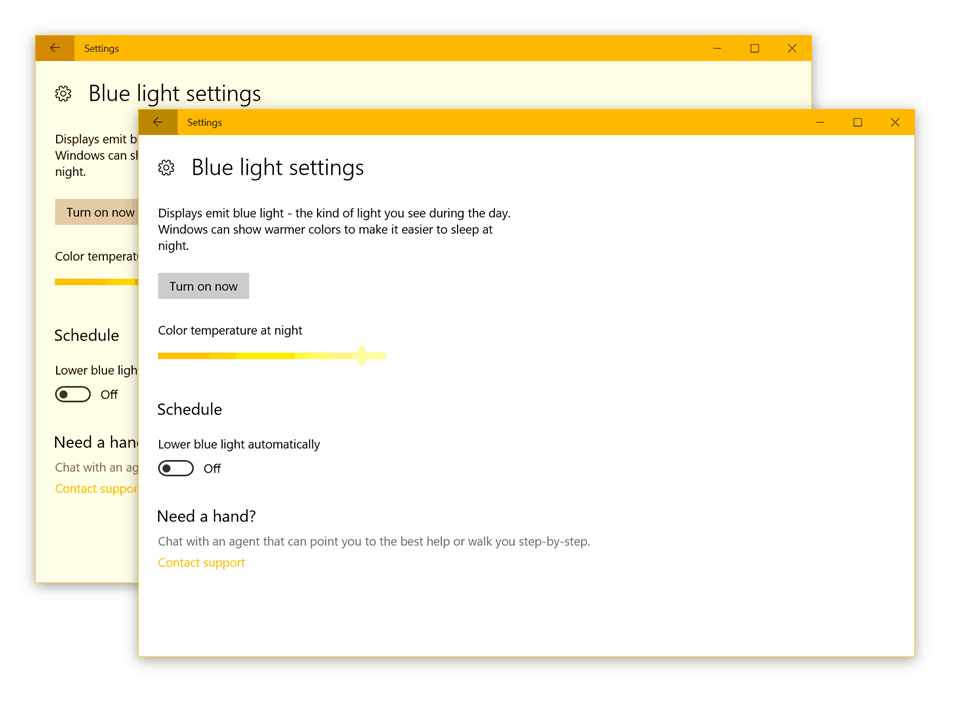 The intensity of the warmth can of course be adjusted here with a slider that is nearly impossible to see on certain displays. Keep in mind that this will affect just your display's color temperature settings, and will not appear in screenshots or recorded video. In the case of my demonstration, the effect was added in post.

Personalization is going to see some interesting changes as we move forwards with the creators update too.

Of these things, Windows themes are being brought back. You can set and save themes here, which seems to be able to save the background, color, sounds and mouse cursor into a theme pack. In the future, you also might see a button to link to the Windows store to download more themes somewhere on this page.

The colors settings now have recently used colors available at the top from you to choose from.

Microsoft claims this is here so that when clicking through to find the perfect color, you might accidentally change your mind and say "oh, nevermind, the last color I used was better" and that it's so much more convenient to have that color saved to recent instead of clicking on it again from the finite panel of existing accent colors. I believe however that this isn't entirely truthful.

The real reason I suspect for this can be seen in the screenshot posted on the Windows Insider Blog. The screenshot shows the new recent accent color list, however it also perhaps or perhaps not inadvertently shows a button for a custom color picker.

Now this isn't anything new, as we've actually seen what this color picker might look like in a video posted by Microsoft previously. This is further evidence that it exists in some working form, however was probably too buggy to be flighted with this build.

Microsoft is continuing to work with improving the support for High DPI displays in windows. Among these things, certain GDI based applications can now have DPI scaling changed by the user as they wish.

By exploring the Compatibility tab of a programs properties, you'll see a checkbox to 'override high DPI scaling behavior'. When this is selected, you can choose weather you want to use the applications scaling system, the system scaling, or Enhanced system scaling. This is something that many users have been asking for a while, and I'm glad to see it here has well.

Something that I'm even more exited to finally see being addressed are the improvements to the desktop icon placement and scaling system. The classic issue of your desktop icons being scrambled up when changing your display orientation, or docking to an external display is finally being looked at. I haven't been able to play around with it much yet, but I'm glad to see that it's being looked into.

As Windows Insiders have requested, MSPAINT has been brought back, and doesn't redirect you to Paint 3D like it had in the previous build. Sort of a weird decision in my opinion, as I feel that we need to get to a point where MSPAINT is no longer needed, especially considering we now have tools provided by windows ink.

Speaking of which… Windows Ink! The Windows Ink icons are among the first wireframe Icons that I've seen in any Windows 10 application that are colored, in this case responding to whatever color you have selected for that tool, which I think makes a lot more sense. The eraser tool now has some more options as well, with a couple new point erase tools rather than just the stroke erase. Now we just need the sparkle pens from OneNote and the experience will be complete.

Now, as with all these new features, there are also quite a few issues, so be aware of that. Like I've said before, I highly discourage you install these builds on your main device, not in that they will cause it to explode, but in that it might be an incredibly miserable experience if an unknown issue pops up in front of you and prevents you from getting any work done.

If this video was helpful, make sure to subscribe and check out onmsft.com to continue receiving updates about the future of Windows 10, Windows 10 Mobile, and the future Windows 10 Creators update.