Hands-on with the Lumia 950 at Microsoft Device Night 2015

A few members of the WinBeta crew spent some time at Microsoft’s Device Night 2015 event in Los Angeles the other night (November 11, to be precise), where the company provided its employees and significant others with an opportunity to get hands-on with a variety of Microsoft products. We took full advantage of the chance to get our hands on some of the new stuff, in particular the hotly-anticipated Lumia 950, and came away impressed.

Some of us had a chance to get our hands on the Lumia 950 XL awhile ago while they made their brief appearance in the Microsoft Stores, and WinBeta editor Kip was convinced enough by his hands-on time with the larger device to preorder it. But choosing between the new Lumia smartphone flagships isn’t necessarily the easiest thing to do.

Our hands-on experience with the Lumia 950 doesn’t make the choice any easier. The following are some of our notes on the device, but suffice it to say we all came away duly impressed. Check out the video for a quick overview.

Design and Build
The Lumia 950’s on display were prototypes, meaning that there’s always a slim chance of something changing by the time manufactured devices hit the streets. The units we handled are likely close enough to the real things to give a good feel for Lumia 950’s fit and finish, and our general impression is pretty positive indeed.

The Lumia 950 is thin and light, but provides enough heft to avoid feeling cheap. It’s generally a comfortable size for a smartphone with a 5.2″ screen, with rounded edges and a matte feel that make it relatively easy to hold and use one-handed. We would have loved to handle a Lumia 950 XL side-by-side, but alas none were available at the event.

While the Lumia 950 isn’t made of metal like some other popular flagship smartphones, it still offers up a quality construction. Of course, Microsoft was wise enough to retain the removable battery and expandable storage, and so we see using polycarbonate instead of metal as more of a function over form strategy than a weakness.

Generally speaking, the Lumia 950 feels great in the hand, and is a great choice for anyone who prefers moderate size and one-handed operation over the expansive screens of phablets such as the Lumia 950 XL. Everything was nice and tight, even on the prototype units, and so build and manufacturing quality shouldn’t be a concern.

Screen
As far as we could tell in the dimly-lit environment, the Lumia 950 has a simply gorgeous screen, with excellent brightness, colors, and contrast. Of course, at 564PPI, the screen is sharp as a tack, with absolutely zero perceptible pixels. Being an AMOLED screen, blacks were inky and melded in with the bezels, and so seeing where the screen ended and the bezels began was impossible. Finally, Live Tiles have always presented an attractive look, and the Lumia 950’s screen brings them in all of their glory.

There’s not much more to say about the screen except that it’s as good as anything else on the market. As far as the screen is concerned, the Lumia 950 should be well worth it’s expected $549 price tag.

Performance
Anyone who’s been running Windows 10 Mobile via the Windows Insider program might be less than impressed about its performance on current generation hardware. If so, then rest assured that the Lumia 950 with its Snapdragon 808 processor and 3GB of RAM provides plenty of oomph.

Overall, the Lumia 950 exhibited excellent performance, with no lag, hesitation, or other performance issues. The prototypes were running build 10586, which is expected to be the shipping version when Windows 10 Mobile officially hits the streets, and we’re happy to report that this build runs incredibly well on the Lumia 950. Everything is speedy, from opening apps to starting up the camera and taking images to using Windows Hello to login. We’ll be looking forward to getting this build on our existing devices to see if some of the performance improvements carry over.

Windows Hello
Speaking of Windows Hello, we got a chance to see it in action. Suffice it to say, we’re looking forward to unlocking our Lumia 950 (or 950 XL) just by looking at it–even when wearing sunglasses. 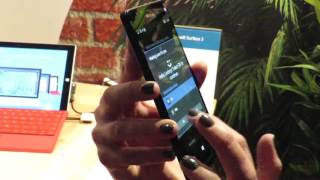 A few members of the WinBeta crew spent some time at Microsoft's Device Night 2015 event in Los Angeles the other night (November 11, to be precise), where the company provided its employees and significant others with an opportunity to get hands-on with a variety of Microsoft products. We took full

Continuum
Windows 10 Mobile Continuum is one of the most anticipated features that will be introduced when the Lumia 950 and 950 XL ship sometime this month or the next. We saw it in action with the Lumia 950, and it’s everything it’s cracked up to be. It’s easier than expected to differentiate between work done on the smartphone and via Continuum, and a nice feature that allows the Lumia itself to function as a trackpad and keyboard.

While using a Windows 10 Mobile smartphone and Continuum isn’t a replacement for a real PC (which nobody is claiming, unlike some companies we can think of), we can see carrying a Lumia 950 or 950 XL and a Display Dock for hooking up in a hotel room or remote office and getting some work done. That sure beats carrying around a notebook or other devices when you just need to lightly edit Office documents or catch up on email.

Continuum was a smooth and error-free experience overall. Not every Windows 10 app is supported yet, but all of the first-party apps work without issue. We were promised that Continuum is a work in progress, and so new features are will be introduced after the technology is officially launched. At this point, we’d consider it a viable solution that’s well worth the investment, while looking forward to what else is possible in the future.

It’s an excellent smartphone
Our conclusion: the Lumia 950 is an impressive device that should please any Windows phone fan and maybe even convince some iOS and Android users to make the switch. It’s competitive with any smartphone on the market in terms of hardware and general performance, and we’re seeing new Universal Windows 10 apps hitting the market even in advance of Windows 10 Mobile’s official release.

Questions remain about how Microsoft is handling the launch of the Lumia 950 and 950 XL, and Windows 10 Mobile in general, but there’s no doubt that they’ve put together some nice hardware.