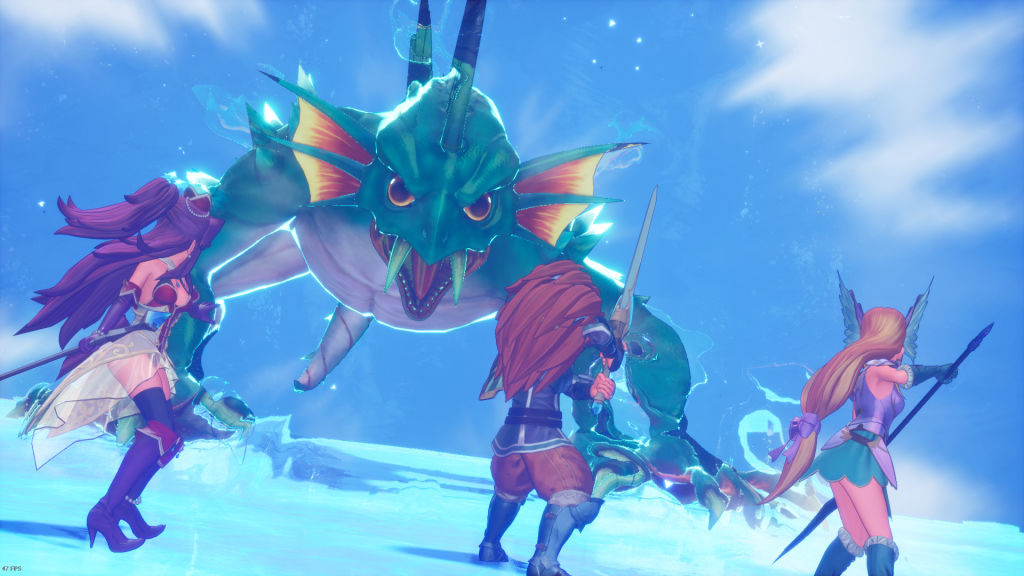 There’s something a bit exceptional about the video games industry this year: first of all, Microsoft and Sony are expected to launch their next-gen consoles this holiday season, assuming the ongoing coronavirus outbreak doesn’t cause any delays. This global crisis is also affecting game developers, with several high-profile games being pushed back to later this year.

In the meantime, though, we’ve already seen the release of three remakes of classic games from the ’90s: Resident Evil 3 (which we’ve reviewed earlier this month), Final Fantasy VII (a timed exclusive on PlayStation 4), and Trials of Mana. The latter may not have received the same amount of hype as the two other games, but the original game was actually never released outside of Japan.

Trials of Mana is the sequel to Secret of Mana, a classic action-RPG game released on the Super Famicom back in 1993. The original Trials of Mana game (named Seiken Densetsu 3 in Japan) hit the Nintendo console in 1995 in Japan, but we had to wait until the release of the Seiken Densetsu Collection on Nintendo Switch in 2017 for it to be finally available in the US and Europe.

This 2020 Trials of Mana remake was released on April 24 on PlayStation 4, Nintendo Switch, and Steam, and we’ve reviewed the PC version. Yes, the game hasn’t been released on Xbox One, just like the previous Secret of Mana remake did two years ago. This probably tells something about Microsoft’s struggles with Japanese developers and publishers, even though the Xbox One uses the same familiar x64 architecture as the PlayStation 4 or Windows PCs.

A great sequel to Secret of Mana

If you owned a Super Famicom in the 90’s, you’ve probably heard about Secret of Mana, which was just as influential as games like The Legend of Zelda: A Link to the Past or Chrono Trigger. Secret of Mana combined a memorable story you could play with 2 other friends, accessible combat, and a great soundtrack.

Trials of Mana hit the Super Famicom two years later in 1995, and it was one of the prettiest games to hit the 16-bit console at a time when the Sony PlayStation and Sega Saturn had just kickstarted the 32-bit consoles era. Even though Trials of Mana was never released in the US, the game was translated in English by fans and many Secret of Mana nostalgics had the chance to discover it through Super Famicom emulators on PC.

In this comparison video, it's easy to see that #TrialsofMana is a HD remake which hasn't forgotten its eye-catching 2D roots!

Are you ready to battle the Fullmetal Hugger on April 24th? 👀 pic.twitter.com/Noyj3Pt8cp

If Trials of Mana didn’t reach the same level of recognition as Secret of Mana due to its limited release, it was a superior game thanks to an improved combat system, more challenging boss fights, and a more engaging story which actually isn't a direct sequel to Secret of Mana. In Trials of Mana, you could choose three characters in a pool of six, and there were three different endgames depending on your choice of the main character.

Trials of Mana was also one of the first J-RPG to introduce a day and night cycle, and there was also an interesting class system that allowed your character to changes classes and gain new abilities after earning enough experience. If the open world wasn’t really huge, it did keep familiar things from Secret of Mana such as cannon travel, as well as the draconic creatures you can use as a means of transportation.

This 2020 Trials of Mana remake drops the top-down perspective of the original game in favor of a much more immersive 3D world built with the Unreal Engine 4. The real-time combat system has also been completely redesigned, though we regret that it’s no longer possible to play the game in co-op with a friend. 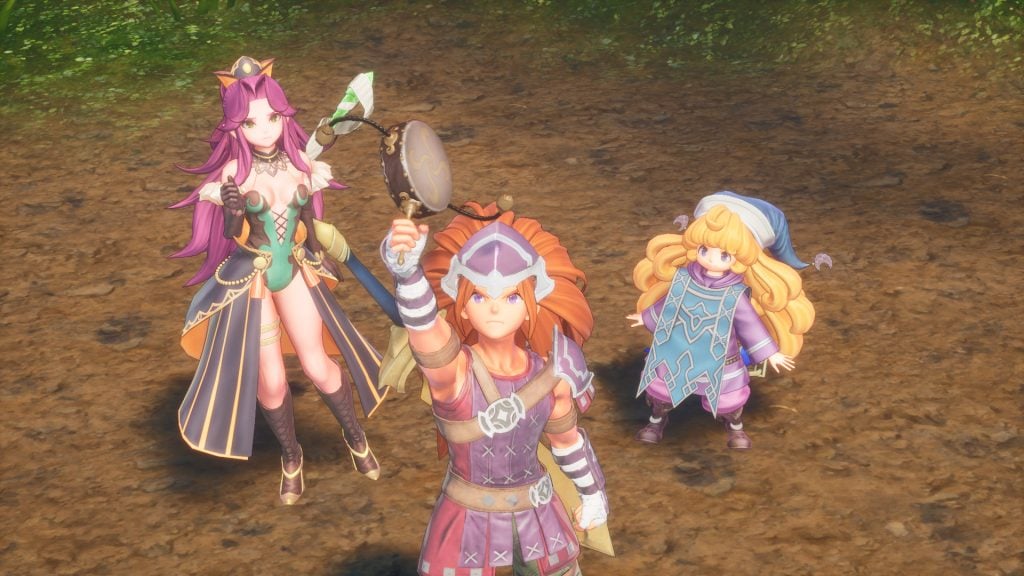 Trials of Mana’s story is set in a fictional heroic-fantasy world where Mana, a powerful but fading energy source is being coveted by different evil factions. At the beginning of the game, you’ll be chosen by a Faerie from the Sanctuary of Mana as a host, and this Faerie will guide you throughout your heroic journey.

Your main mission in the beginning of the game will be to open a portal to the aforementioned Sanctuary to find the Sword of Mana, the embodiment of the ancient power of mana. As the one who holds the Mana Sword gains awesome power, you’ll have to retrieve it before other evil factions in the game get to it first.

What’s interesting about Trials Mana is that your choice of main character will determine your primary antagonist, so you’re invited to play the game with at least three different characters to experience three different paths and endings. This a great way to improve replayability, especially since all six characters have different fighting styles and abilities. 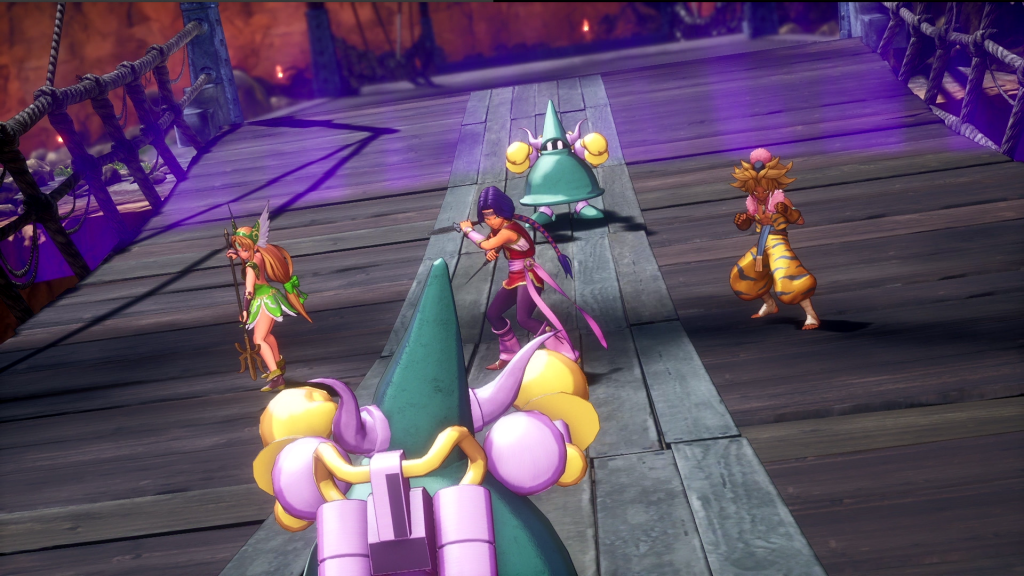 During my playthrough, I chose the swordsman Duran as my main character, which shares his main antagonist with the magician Angela. There’s a unique prologue for every character, and when you’ll meet your two other companions, you’ll be able to either see a cutscene explaining their background, or experience their full prologue by yourself.

In Duran’s prologue, his hometown of Valsena is being attacked by troops from Altena, the Kingdom of Magic where Angela, my second magician character is coming from. After being humiliated in combat by Altena's mysterious Crimson Wizard, Duran swears to not come back to his hometown until he has defeated the Crimson Wizard and become the best swordsman in the world.

Angela, my magician companion character also had some grudge against the Crimson Wizard, who serves as a chief adviser for her mom, the queen of Altena. Because Angela showed no natural ability to use magic, the Crimson Wizard convinced the queen to sacrifice her daughter’s life in exchange for more magic power.

We’re not far from Games of Thrones levels of drama here, and the interwoven destinies of all the different characters make for a pretty good story. And again, you’ll be able to discover two other main antagonists and storylines if you chose a main character that isn’t Duran or Angela. 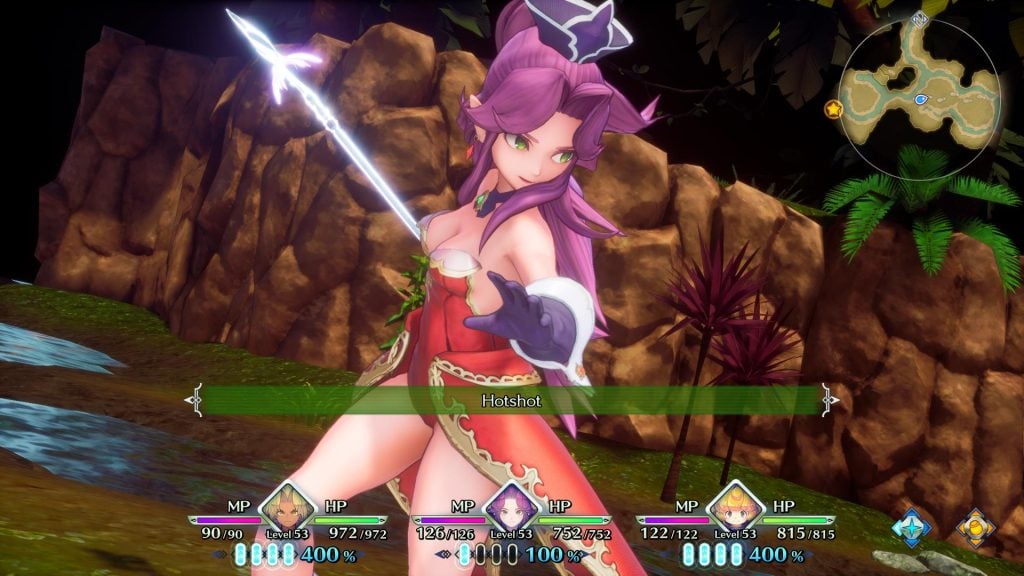 Trials of Mana uses a real-time combat system that is pretty easy to master. You have one button for light attacks and another one for heavy attacks, which you can hold to do a charge attack. There’s also a limited but useful combo system to deal more damages to enemies, and I actually wish that that combo system offered a bit more depth. Unfortunately, you’ll quickly end up doing the same combo over and over again, and this can make combat a bit repetitive.

Fortunately, you can mix up regular attacks with Class Strikes, which are powerful range attacks you can use once you’ve dealt a certain amount of damage to enemies. Some characters including Angela can also unlock long-range magic attacks, which can be pretty effective at the cost of magic points. The familiar ring menu from the original Secret of Mana and Trials of Mana is still there, letting you pause the action to use magic attacks and healing items.

Each character has different strengths and weaknesses, so a swordsman like Duran is more powerful and resilient than the magician Angela, but the latter has better magic defense and can unlock some powerful spells. It's important to choose your different characters carefully, though can switch between them at any time. It's also worth noting that the game is best played with a controller, but mouse and keyboard controls are also supported on PC. 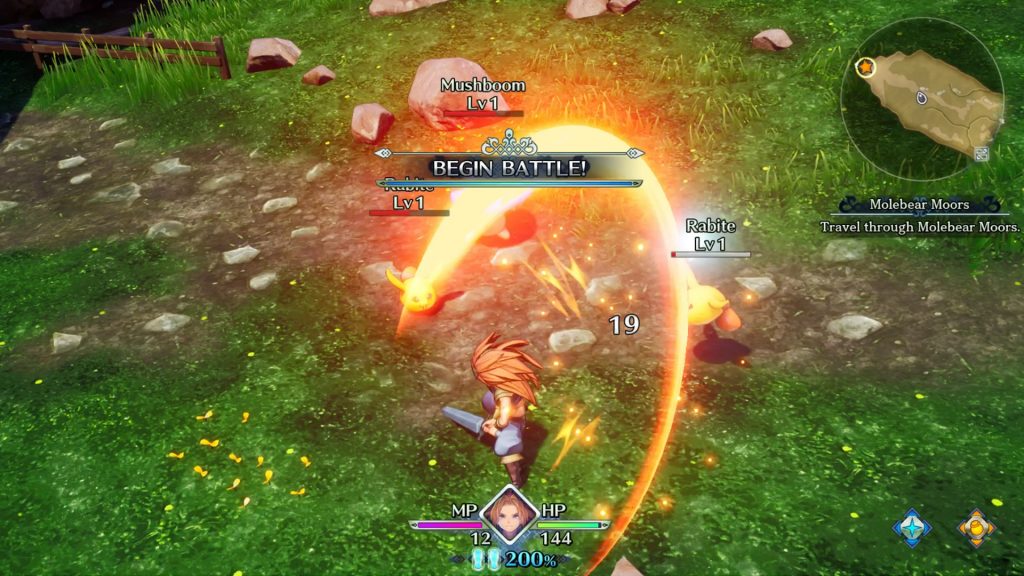 Some familiar and new RPG mechanisms

During your journey, you’ll meet 8 elemental spirits that will allow your characters to access new moves and magic. Those are unlocked by spending Training Points in different stats including Strength Stamina, Spirit, Intelligence, and Luck. 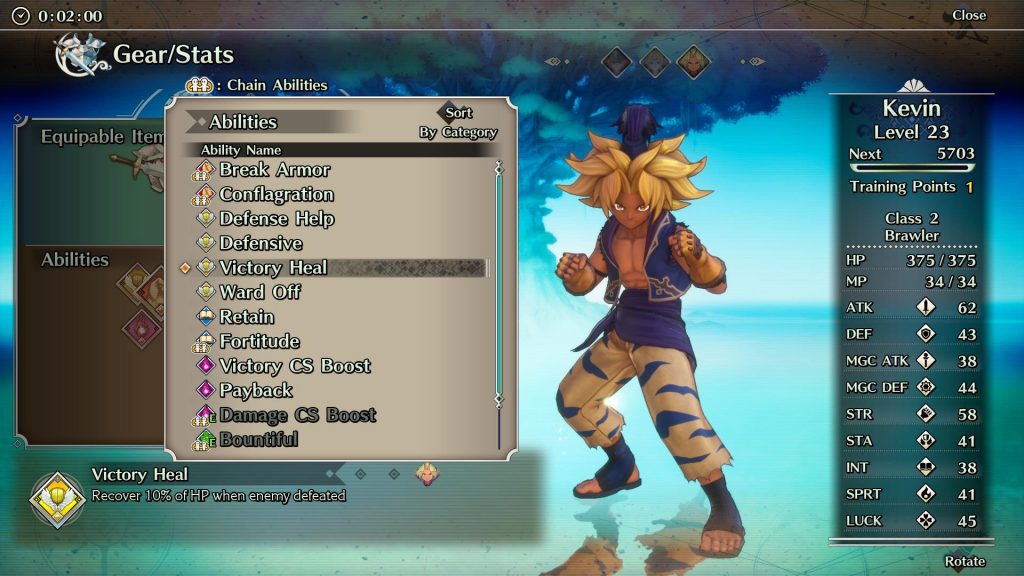 You can only equip a limited number of passive abilities, and this number will increase once you switch to a higher class. You can do that first when reaching level 18, and a second time after reaching level 38.

When switching classes, you’ll be able to choose a “Light” or “Dark” path that will give your character different new abilities. Anyway, switching classes provides a new combo, a new “Class Strike” long-range attack, 2 new ability slots, and new magic spells to unlock with Training points.

This class system can really change your character’s abilities: With Duran, the Light path gives him a healing spell and the ability to equip a shield, while the Dark path improves his attack power and unlocks spells to add elemental damage to your attacks. In case you’d like to try a different class path, this remake introduces a new Goddess Scales item you can use to revert back to a previous class. 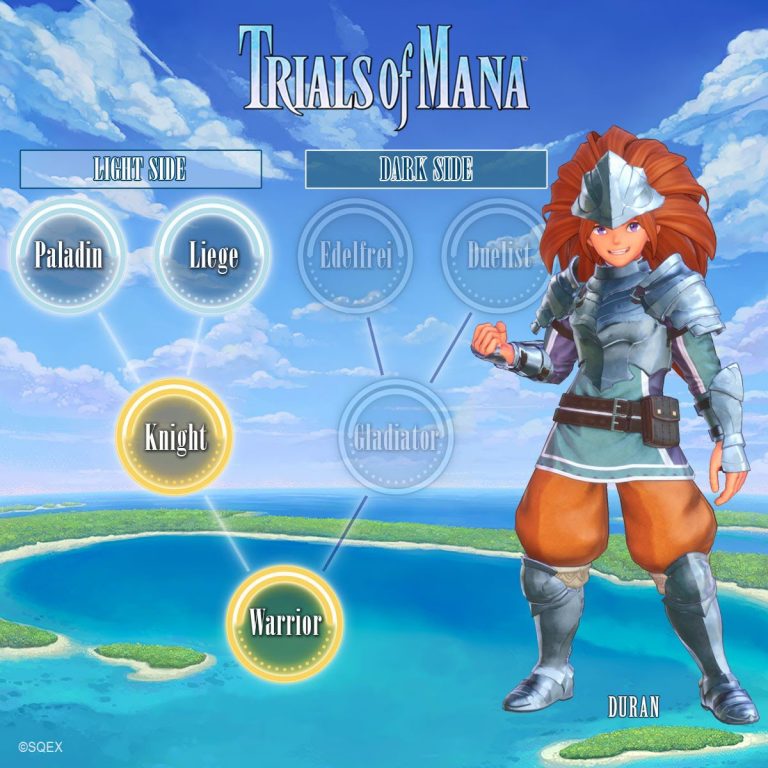 A game that still shows its age

Overall, Square Enix did a really good job at giving a fresh coat of paint to a cult-classic title, but RPG games have evolved quite a lot since Trials of Mana was released in the mid-nineties. There’s no denying that the game’s open world is pretty small by 2020’s standards, with redundant NPCs offering no real dialogue options.

Trials of Mana is also really linear, and the game’s various dungeons are pretty straightforward. There are no complex puzzles to solve except for some switches to activate to unlock some doors. This remake also added a new minimap with checkpoints, though you can turn it off in settings if you want fewer indications.

In general, I found that Trials of Mana is also a bit too easy, even if you chose the hard difficulty like I did. I probably died two or three times during my playthrough, and overall this remake felt much easier than the original Super Famicom game. That's not necessarily a bad thing, but those of you looking for a challenge may be disappointed.

I won’t spoil anything about the endgame, but this remake brings a new chapter you’ll have to complete to unlock the New Game+ mode. This new chapter also introduces a fourth class change for your characters, which was a nice surprise. 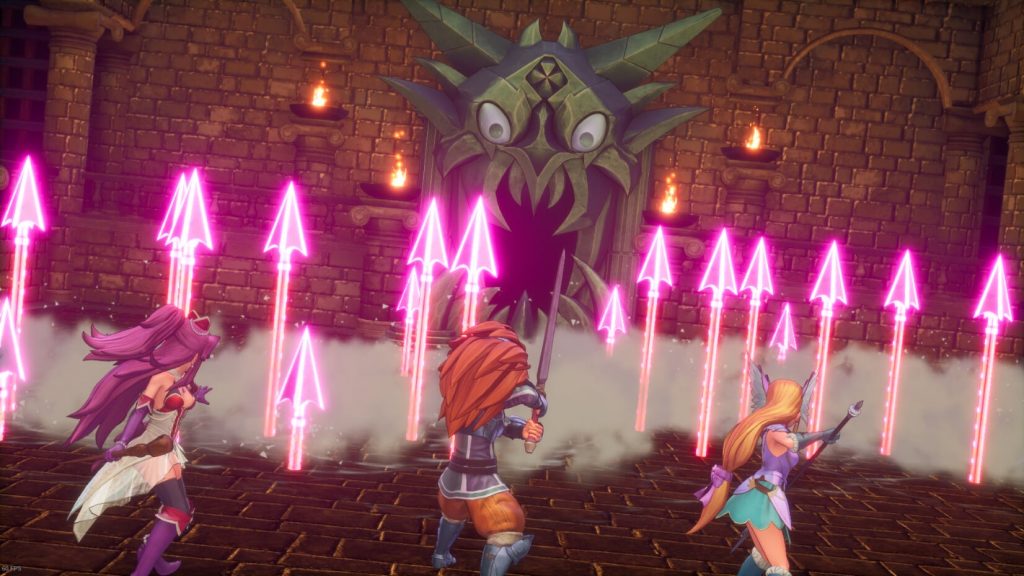 A J-RPG for everyone?

J-RPGs can be a tough sell for the occidental audience. From convoluted storylines to unappealing characters with sometimes gravity-defying haircuts, there’s no denying that franchises like Final Fantasy or Kingdom Hearts are not for everyone. That’s probably why Square Enix didn’t release this Trials of Mana remake on Xbox One, even though the Japanese company has been an early supporter of Microsoft's initiatives such as Xbox Game Pass.

Overall, I think Trials of Mana is highly recommended if you kept great memories of Secret of Mana on the Super Famicom. If you did play the original Trials of Mana game that did not ship outside Japan until 2017, I think you’ll also enjoy this 3D remake. For everyone else, this is a solid RPG with an interesting story, likeable characters, and pretty good combat. If the latter can become a bit repetitive, this is compensated by the variety of characters, and I can't wait to start a second playthrough with different heroes.

I had high expectations for this remake, and I think Square Enix did a pretty solid job overall. I hope to see Trials of Mana join Final Fantasy XV and other Square Enix games in Xbox Game Pass for PC, but in the meantime, you can purchase the game on Steam for $49.99. A free demo is also available, and your save file will carry over if you decide to buy the full game.