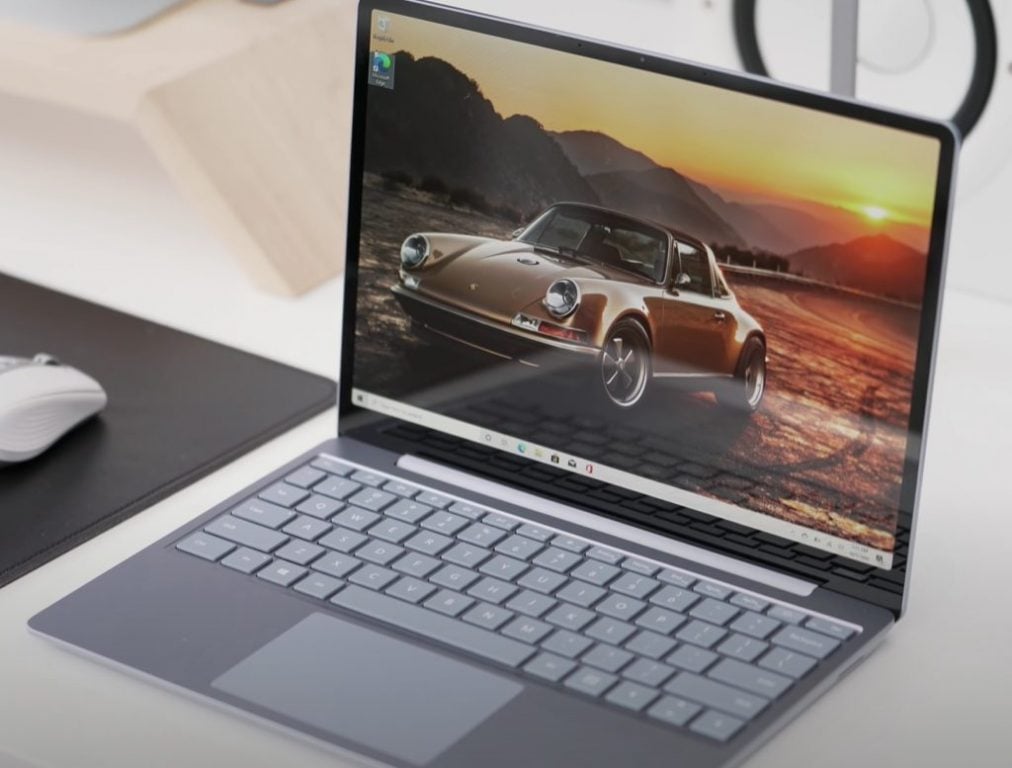 As Microsoft's Surface division continues to push out new hardware designs and expands the entry-level price points into its flagship experiences, it seemingly does so at the expense of its core philosophy.

Back in 2012, Microsoft pitched the original Surface Pro tablet computer as the end-all-be-all flexible computing device intended to compete against the dual personal compute wielding iPad and PC crowds.

However, in 2020, Microsoft has evolved its line up to include Surfaces with traditional clamshell designs at various screen sizes, wall-mounted computers, detachables, and even dual-screen experiences. Microsoft's latest offering is now the Surface Laptop Go, which is a smaller incarnation of its clamshell Surface Laptop. 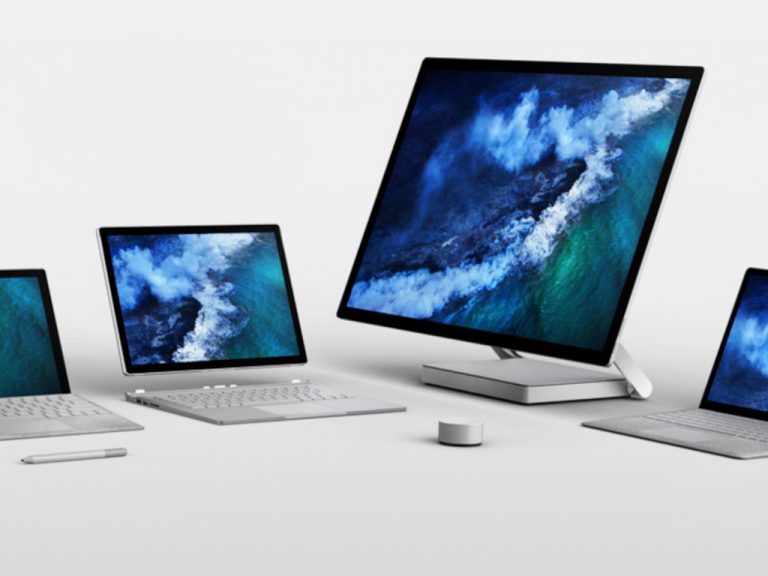 The existence of the Surface Laptop Go in Microsoft's computing line up could be seen as a bit of a headscratcher as it appears the company may be doubling down on a direction diametrically opposed to the original concept of the Surface, but let's be honest, at $549.99, who really cares?

In context, most of Microsoft's flagship devices these days command a hefty price tag. Microsoft's strategy is to arguably create a ceiling for its partner OEMs to come in underneath with their more reasonable prices, but nevertheless, Surface buyers have been slowly conditioned to expect premium prices for devices, and yet, Microsoft's Go lineup attempts to buck that trend now seven years into the company's production.

For a starting price of $549.99 or $28.70/month for 24 months with approved credit, Surface Laptop Go customers get a 12.4-inch touch screen powered by 10th Gen Intel Core i5 processor, a questionable 64GB of eMMC storage, middling Intel UHD graphics, 4GB of LPDDR4 RAM, and a 720p HD f2.0 front-facing webcam. The entire Surface Laptop Go package weighs a solid 2.44 lbs. and feels every bit as premium as its larger flagship brother, the Surface Laptop. 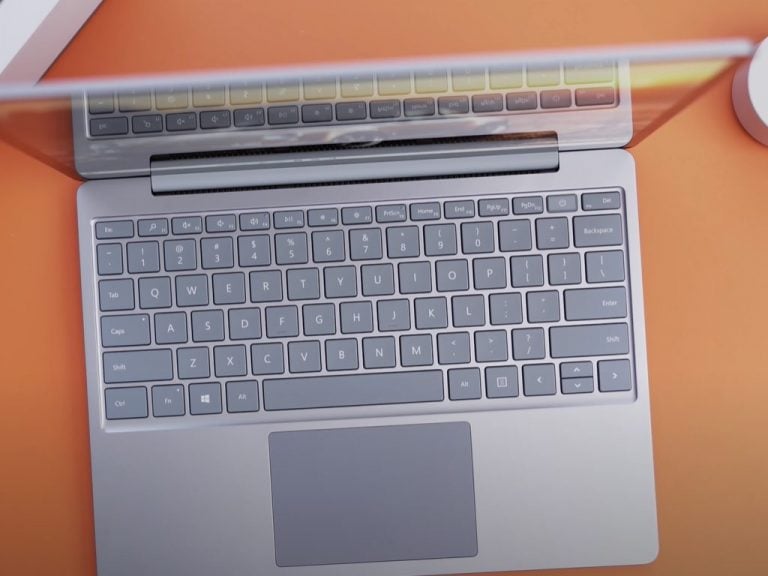 However, OnMSFT received a review unit configured at the $854.99 price point that includes the beefier 8GB RAM and 256GB of storage as well as the Fingerprint Reader.

The Surface team once again managed a weight balance dynamic that allows for one-finger lid opening of the Laptop Go, and opening the lid presents the signature 3:2 PixelSense screen aspect ratio with a decent 1536x1024 and 148 PPI paired with 10 points multi-touch experience.

The polycarbonate composite resin system mixed bottom casing definitely stands out against the aluminum and magnesium build qualities found in both the Surface Laptop and Surface Pro lineups, but in real-world use, when the laptop is usually bottom facing, it's rarely seen or noticed.

Without belaboring the point any further, despite the lower than the normal price point for the Surface Laptop Go, I don't believe Microsoft can be accused of skimping on its material bill. Admittedly, there is no Windows Hello face detection, the screen's brightness and resolution tap out a bit lower than other Surface displays and the low-res webcam isn't doing anyone any favors, but individually each perceived drawback still excels at its given function. 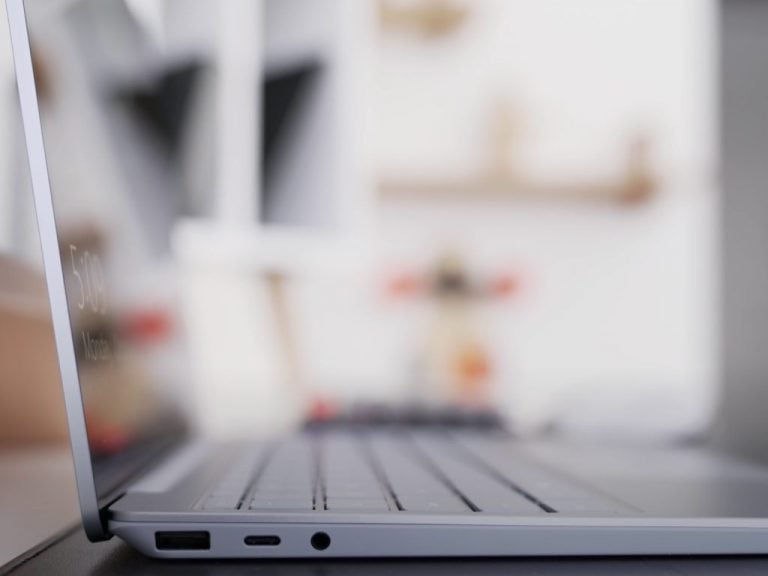 Anyone picking up the Surface Laptop Go should be pleased with the build quality of the device, but a personal computing device is the sum of its experiences and a premium look is only half the story.

Emblematic of its intended buyer's segment of Chromebook considerate purchasers, the Surface Laptop Go comes pre-installed with Windows 10 Home in S mode. In and of itself, Windows 10 S can be a delight if a user is aware of its potential limitations beforehand, or even uses it as they would ChromeOS by relying on web apps, browser extensions, and optimized Microsoft Store applications.

Early on in my reviews of Windows 10 S enabled devices, I like to see if my workflow can be met with the leashed version of Windows 10. On the Surface Laptop Go, Windows 10 S flies, albeit low to the ground, but it was serviceable in large part for someone whose job consists of light graphics editing, testing website code, running macros-enabled Excel sheets, and crafting 70+ PowerPoint slide presentations.

During a daily workload, on Windows 10 S the Laptop remained cool and silent.

However, venturing out of Windows 10 S into the uncharted world of the Windows 10 Insider program and more RAM intensive .exe applications does begin to pull at seams on the Surface Laptop Go, just a bit. As soon as I began my first Windows 10 Insider build download, the fans in the Surface Laptop Go kicked on. Fortunately, with whatever design the component team cobbled together, the whirring of the fans was minimal and significantly less resounding than other comparable laptops I've tested. There was less of a whirring noise and more of a consistent buzz that was audible during more intensive tasks such as the light gaming that the Laptop Go could pull off or audio multi-layered audio encoding. 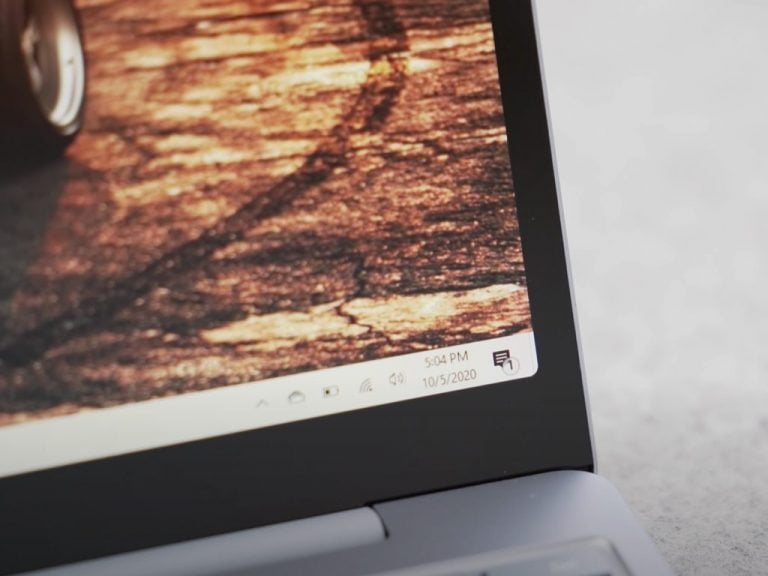 Despite Microsoft's marketing push for Always Connected power-on settings for its Surface line, the Laptop Go did take a noticeable 10 or more seconds to basically reanimate apps back to working order. Any action done between the 10 seconds from sleep to operable was very apparent in Office apps surprisingly, and even in PWAs powered by Edge, albeit the Canary release of the software, but Edge none the less. But, once the apps were up and running, closing, cycling through, and reopening them was clippy and pleasant. I wouldn't recommend using the Laptop Go for more creative tasks such as video editing or music recording, but it could do so in a pinch, depending on how demanding the software is. When I wasn't using the Laptop Go as a mini-marketing workstation, I used it in my downtime to record and edit podcasts as well as edit videos, read comics, watch movies, cookbooks, and a workout tool and thanks to its more compact size, I was able to fit it into more spaces and places than my larger Surface Laptop 15 or even other 13 and 14-inch review units. 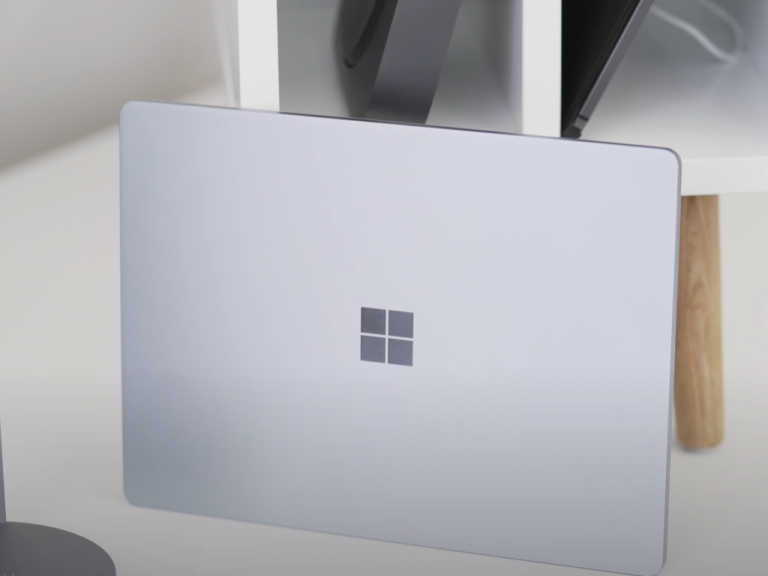 There were only a handful of times where I could see limitations of this device, and that was when it pushed up against multiples of Edge tabs (that could be an issue of canary Edge), and when I tried to edit large batches of images using GIMP. To test the software vs hardware theory of photo editing and graphics creation on the Surface Laptop Go, I finally pitched for the full version of Affinity Designer. AD is a stellar Windows 10 and macOS alternative to Photoshop and it works well on both platforms. On the Surface Laptop Go, there were still a few noticeable lag situations, but I was able to get my work done, and done fairly quickly.

I don't run the most exhaustive benchmark tests because, one, I don't believe that's how laptops are used and two, there are millions of other reviewers who do. For those looking for speeds and feeds, however, here are some numbers pulled from PCMag's benchmark tests.

When it comes to theoretical performance as measured by our benchmarks, though, it’s clear that the Surface Laptop Go’s performance is middling against its comparably priced peers. It’s slightly faster than the Core i3-equipped Lenovo Yoga C640, but significantly slower on most complex, CPU-intensive tasks than the AMD Ryzen 5-equipped Lenovo IdeaPad Flex 5 14. In the chart below, you can see the specs of the versions of each of these laptops that we reviewed, along with two more comparable systems: the Acer Spin 3 and the Surface Go 2 tablet mentioned earlier on. 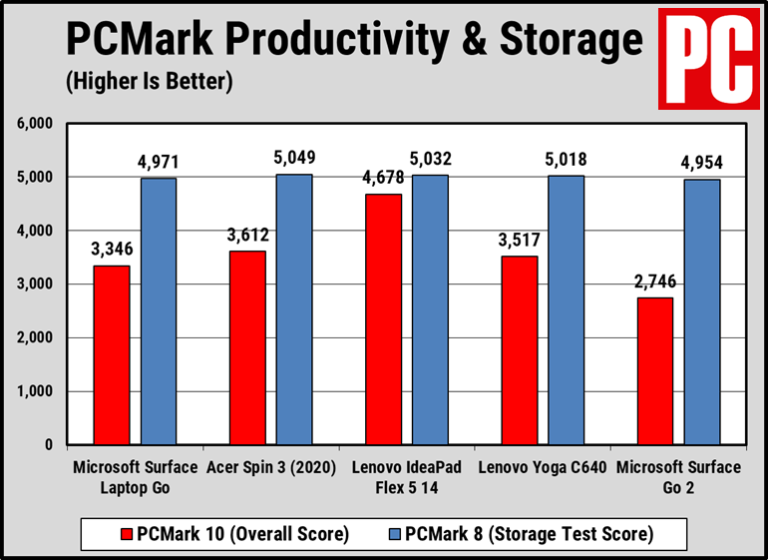 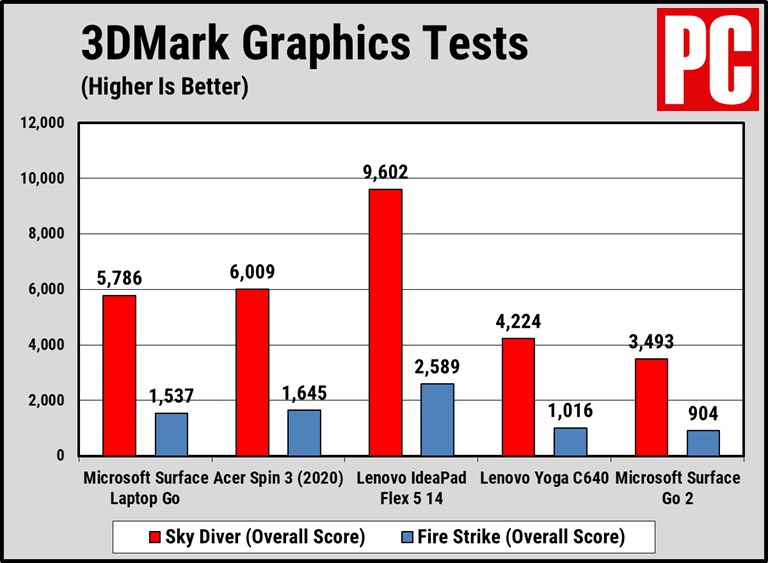 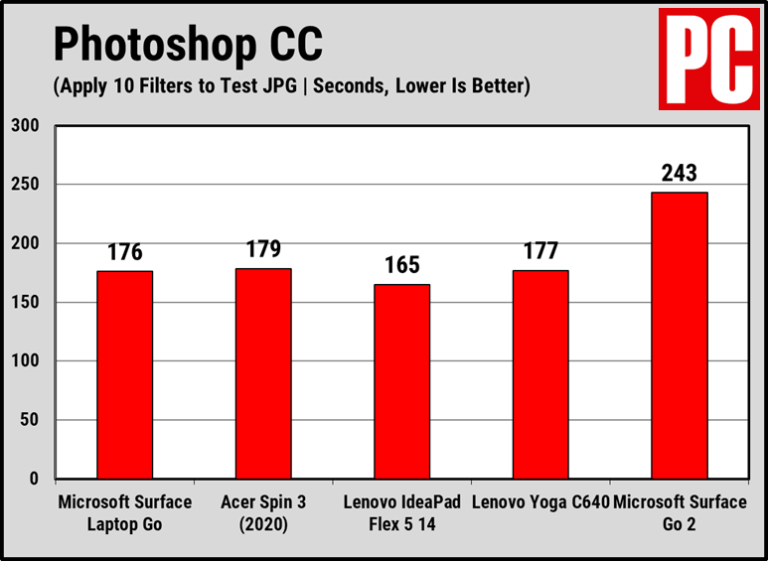 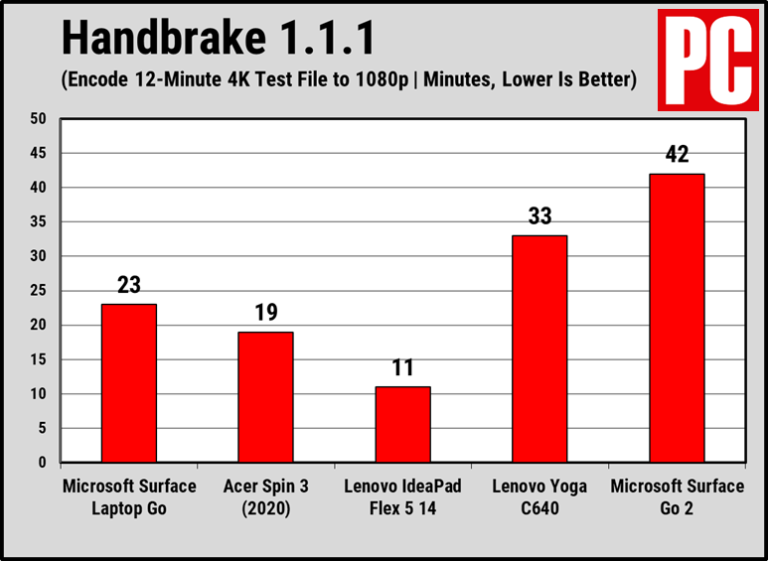 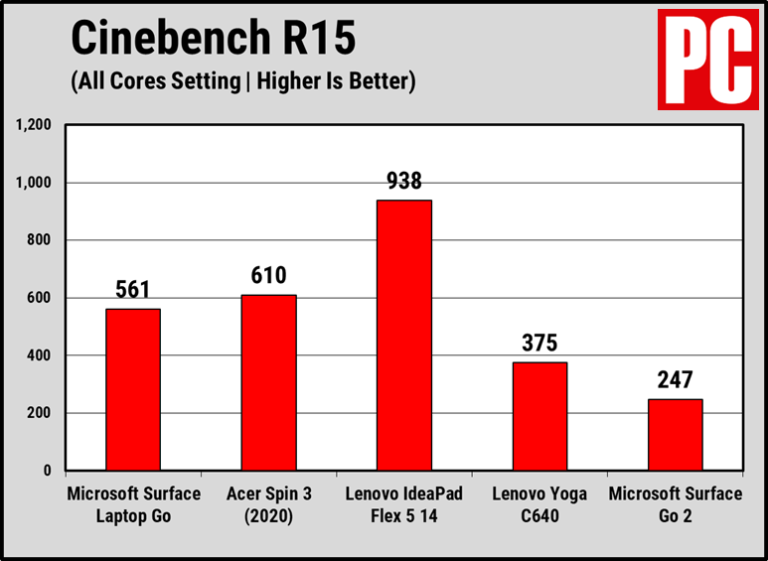 Perhaps the more telling story of the Surface Laptop Go was when I tested the device as a virtual classroom alternative to the iPad for my daughters. The screen on the Laptop Go presents a much larger canvas, and its touch capabilities made it easier to navigate the mute/unmute controls for them as well during classes. The sturdy and rigid frame was another thing feature that withstood several drops off a 2-foot kiddie desk as well. Yes, an iPad can be more versatile at a lower price point, but if the computing needs of family evolve beyond this pandemic, the Surface Laptop Go is well suited to age with them.

As much as I loved the Surface Laptop Go's sorta new experience, it's yet another computer running Windows 10. The price is only noteworthy among its own premiere line of siblings. There are other better-packaged offerings coming from Lenovo, Acer, and Asus at the price point that makes the Surface Laptop Go viable and that's acknowledging that the marketed $549 is only a paper price point. For the more realistic $799 price, the IdeaPad Flex 5 14 and Yoga C640 exist, but for anyone who's bought into the Surface lineup with an older Surface Pro or Laptop and are looking for a similar experience in a smaller package, the Surface Laptop Go is ideal. The other, unspoken benefit that should be considered is the relatively light OS load Surface users become accustomed to with minimal bloat and a Pixel-like streamlined experience. As with other Surface devices, the Microsoft Signature experience is present in all its bloat-free glory. 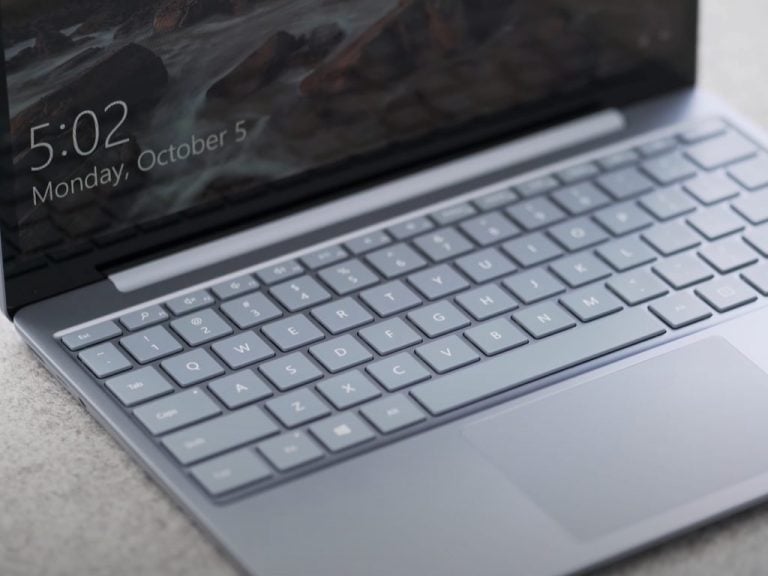 Thankfully, because of consolidation on I/O peripherals, I was able to power an entire workstation that included a secondary monitor, microphones, speakers, webcam, external hard drives, and wireless chargers, all without a hitch using a single USB-C dongle. If you're looking to replace or build a workstation at home for anything shy of production or engineering level workflows, the Surface Laptop Go is a decent alternative and helps to fill in the gaps in Microsoft's personal computing ethos that emphasizes 'surfaces everywhere.'

Microsoft Planner is getting custom background images for plans in January