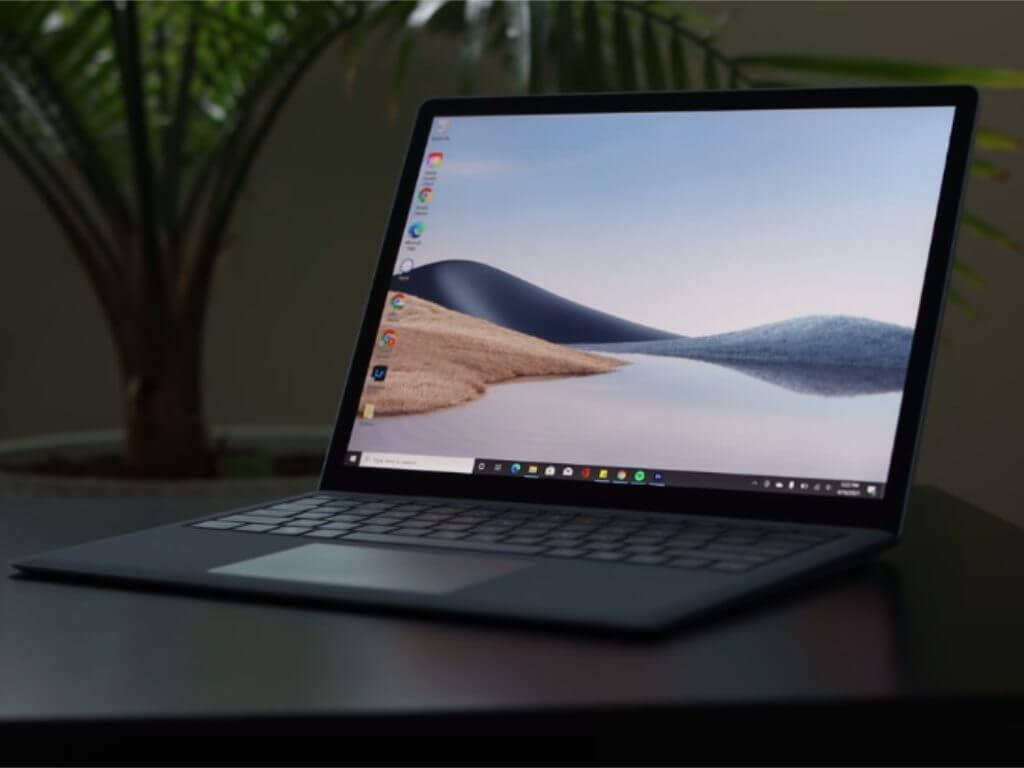 While coming in with a slightly dated hardware design for its fourth iteration, the Surface Laptop 4 provides a great all-around laptop experience, albeit a tad on the expensive side.

There has been a relatively unspoken understanding that if and when Microsoft is determined to propel a product, it can take up to three tries before the company's efforts see commercial success. Take for instance the company's Surface Pro tablet computer, where it wasn't until the Surface Pro 3 that Microsoft finally nailed the overall hardware dimensions, power to fan cooling ratio and attached keyboard design. Another, triple effort example of Microsoft's iterative progress is its Halo franchise with Halo 3 taking high marks as the culmination of years of developer evolution on hardware that, arguably, also took three tries to nail. 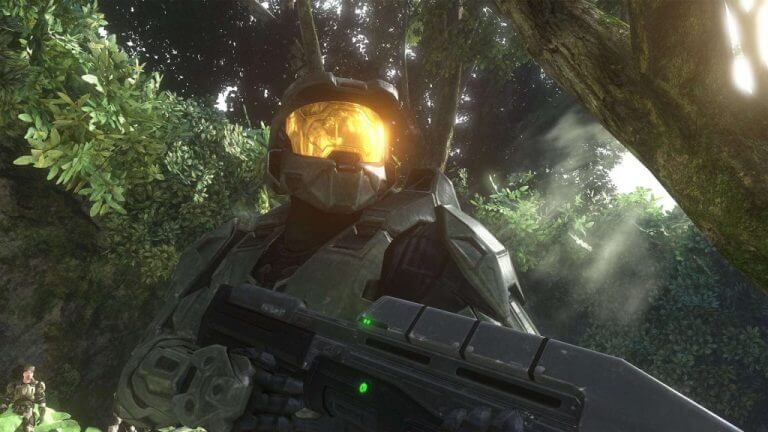 Microsoft's efforts for the Surface Laptop 3 were a muddled experimental shift in the way the laptop was designed, presented, and commercialized. Between dancing back and forth with new AMD models and its tried-and-true Intel partnership, to the inclusion of new metal keyboard chassis and bump in screen size offerings, a lot was thrown at customers.

Instead consolidating around a cental upgrade theme like the Surface Pro 3 going with thinner and larger, customers were left wading through the various individual improvements spanned across a multitude of models and screen sizes, and many only incrementally better than the Surface Laptop 2.

Fortunately, Microsoft seemed to get the messaging with the Surface Laptop 4, where the main theme this upgrade cycle was performance.

Sure, there are actually more model numbers to choose from, and the AMD experiment continues, but, what each Surface Laptop 4 model leans on this generation is an improvement in performance, particularly the Intel models.

I've been testing the Ice Blue, 13-inch Surface Laptop 4 with 11th Gen Intel Core i7 @ 3.00GHz and 16GB of RAM for the past few months. The outside of the Surface Laptop 4 has remained relatively untouched from the first few iterations of the lineup.

Still easily accessible with a single fingertip, the weight distribution on the Surface Laptop 4 feels very much in line with its claims of being only 2.8lbs. The Surface Laptop 4 is as sleek and minimalistic as the previous year, which plays into a growing narrative that Microsoft is sitting on a stale design.

Personally, I enjoy the consistency, but I can see where competitive improvements could happen, such as reducing the screen bezel from its 2017 origins as well as the inclusion of additional port options.

The new Ice Blue color is deceivingly titled as it often looks more metallic silver with a tint of blue in most lighting situations. It isn't until the lid of the Surface Laptop 4 is flipped open that the darker blue-ish Alcantara keyboard solidifies its claim to blue.

The Alcantara keyboard feels much the same as previous generations. While Microsoft may have refined the tooling process for the keyboard fabric, it feels every bit as soft and warm to the touch as it did on previous models.

Both consciously and unconsciously I found myself being more reserved with my work/eating routines as I had been with other laptops, since crumbs and liquids posed a seemingly more immediate threat to the clean look and feel of the fabric keyboard. While the Alcantara is not a deterrent in my experience, it did make me consider, on several occasions, where and how I used my laptop.

The right side of the Laptop 4 remains the most cluttered of spaces on the device as it houses the USB-A, USB-C (without Thunderbolt 4 support) and headphone/mic combo. The left side is relatively bare, only sporting the single proprietary Microsoft quick charging port.

Maybe in newer versions, Microsoft may toy with the idea of adding an additional USB-C port to the left side of the device to quadruple its productivity output both figuratively and literally.

The 3:2 aspect ratio on the Surface Laptop remains untouched and perhaps, one of the best-selling points of the Surface Laptop 4. With a 2256 x 1504-Pixel Sense display, 2K content comes in very nice and mostly color accurate. There are some additional tweaks to adjust the screens output when diving into the Intel Graphics Command Center, to boost HDR and brightness settings.

By now, I've gotten used to the black bars surrounding video content, but it can be a bit of an adjustment for some transitioning from more abundant 16:9 screens, however, the increased web real estate more than makes up for it, when working and not consuming media.

For typists, the keyboard experience is still one of the best in the industry, with great responsiveness and 1.3mm travel.

Enough about the impressive yet "stale" look of the laptop, the Surface Laptop 4's central theme in 2021 is that it's gotten a significant performance boost. While I can only speak for the Intel model I was given for review, there are other reviews for the AMD model that tout similar gains (respective to the 2019) model, albeit with notable throttling considerations.

As for the 11th Gen Intel chipsets, the performance gains for both the Surface Laptop 4 and Surface Pro 8 Plus have left me rather pleased with both devices.

Comparatively speaking, the Surface Laptop 4 has managed to keep pace with its productivity class which included the MacBook Pro M1, Dell XPS 13, and Lenovo Yoga Slim 7i Carbon 13.

There is a notable jump in performance between the i5 and i7 variants of Intel's chip which allows the Surface Laptop 4 to punch a little higher than on most i5 reviews that have been published. 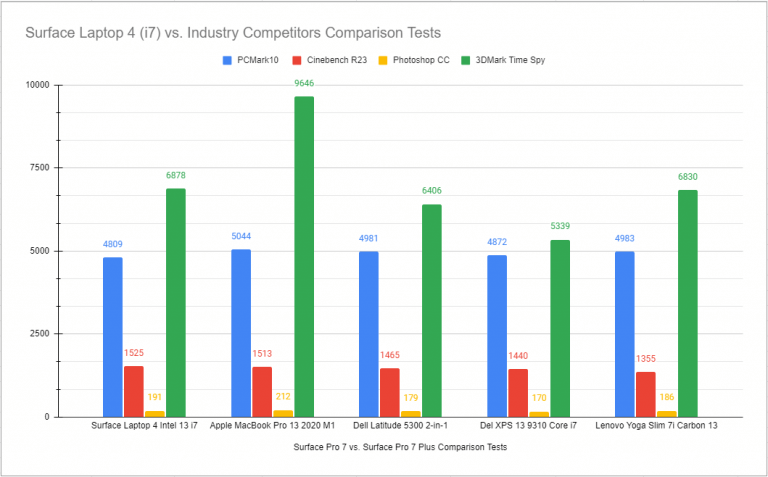 Tasks such as high-resolution video playback are handled more efficiently on the Surface Laptop 4 than on the 3, resulting in fewer instances of the fan kicking on and heating from the bottom of the laptop. 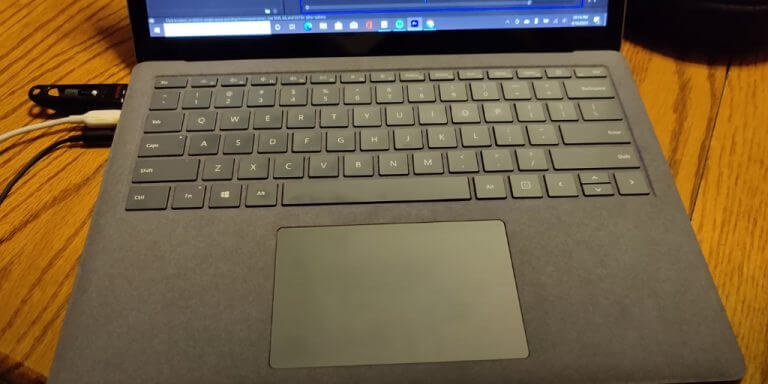 I've been using the Laptop 4 as my daily driver and video editing rig for the past few months and while rendering can take a noticeable amount of time, encoding and actual interface edits have been significantly improved and borderline pleasant.

The PCIe SSD in the Laptop 4 is mostly unchanged from that in the Laptop 3 with read/write speeds mostly the same, but still edge out the likes the of its predecessor and even the Dell XPS 13.

I've found it's come down to the actual software used when video editing that either hinders or boosts the Surface Laptop 4's output and using the relatively lightweight Filmora 9 or X software kept things running more smoothly than DaVinci Resolve or Adobe Premiere, on my end.

When it comes to more normal tasks such as writing, editing, data entry, data processing, reporting and communications, the Surface Laptop 4 breezed through all of it. On an i7, macros-laden Excel docs open, closed and saved with fluidity, my PowerPoints didn't chug after 70 plus slides and using the front facing webcam in a pinch was just as high fidelity as some of my off-the-shelf Amazon cams.

If the Surface Laptop is an all-in-one college consideration, gaming isn't in the cards for most users. However, I was able to play State of Decay 2 on medium settings with no stutters, other more intensive FPS games performed only decently. 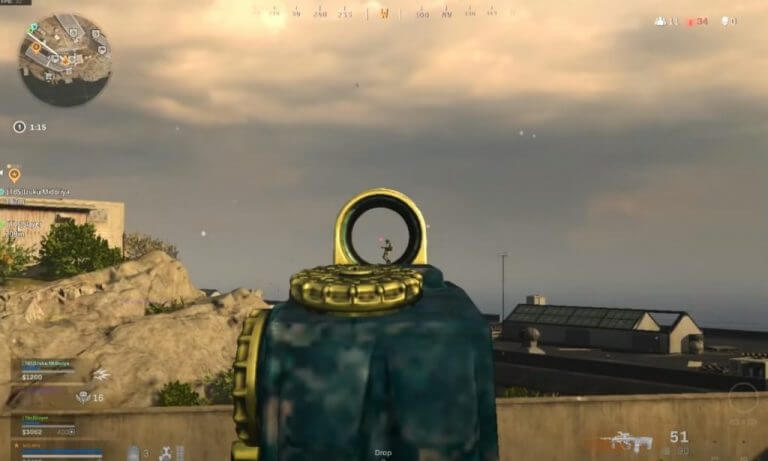 However, during my testing, Microsoft took the wraps off xCloud for PC and I've been using Stadia as well, and both have breathed gaming life back into my Surface Laptop 4. I've been able to play Marvel's Avengers, Hades, and other games close to zero latency and at high resolutions for hours.

Speaking of hours, the Surface Laptop 4 does improve upon its 10-hour battery claims from the Surface Laptop 3. I was able to consistently reach 10 hours most days with moderate to heavy use, and 5 hours with heavy video editing.

While it's a far cry from the 17-hour claims for the Surface Laptop 4, on light use, I could push the device to 15 hours and that's not nothing to sneeze at.

While Microsoft tends to use its third strike to knock out some homerun products, it feels like the Laptop 3 from 2019 was more of a bunt setting up an infield homerun for the Surface Laptop 4. The Laptop 4's success may not come with the same sort of fanfare and fireworks as a fancy out of the park homerun, it does help advance all runners and counts just as much.

The Surface Laptop 4's biggest upgrade in 2021 is its processor and for most, that is more than enough. While most laptops in 2021 come with Intel's 11 Gen and similar or better graphics performance, for the Surface Laptop fan, it's become a significant reason to upgrade from an original Laptop, Laptop 2 or even a Laptop 3 in some instances.

Yes, the price per power/performance equation for the Surface Laptop is a bit skewed to the higher end, and there are devices out now that undercut that proposal, but for fans of a bloat free, minimalistic software and hardware experience, the Surface Laptop 4 is hard to beat this year.