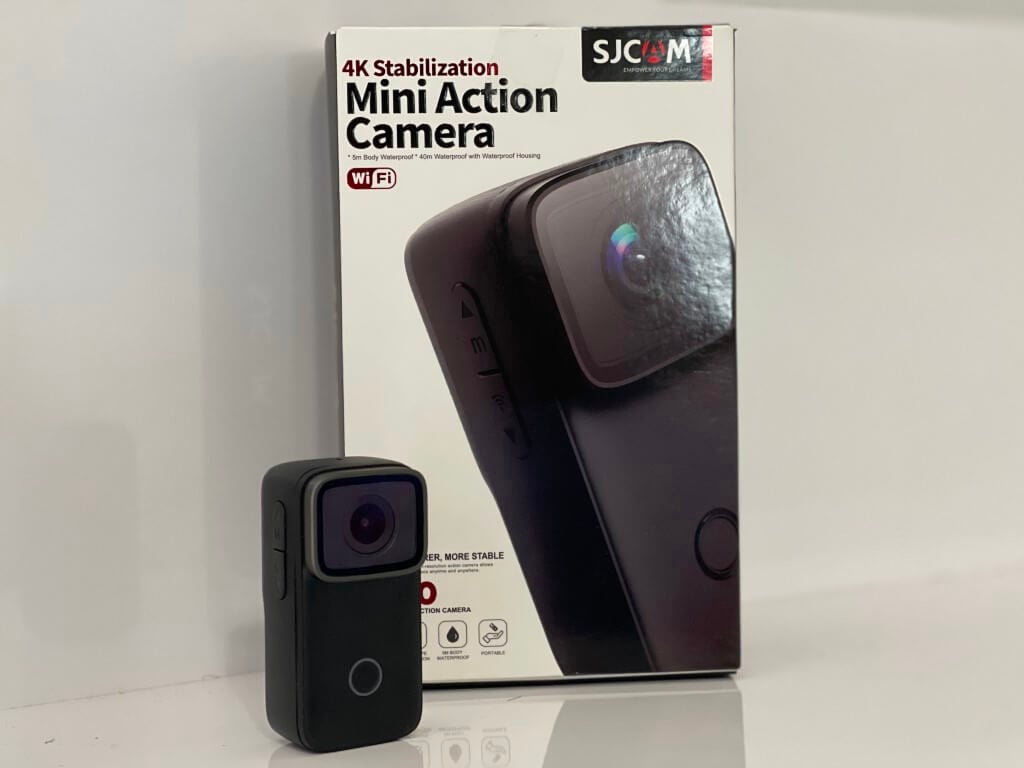 If you're into filming action videos when skating, swimming, surfing, or even biking, then you're probably familiar with a GoPro. The relatively new brand SJPRO, however, recently made its entry into that same market with the SJCAM C200.

This little action camera promises 4K image quality and some of the other features from a GoPro, and with the bonus ability to be used as a webcam. But does that make it the perfect product to buy?

We were provided one with a review, and are happy to explain a little bit more on why this little action camera almost has what it takes to be part webcam, part GoPro. 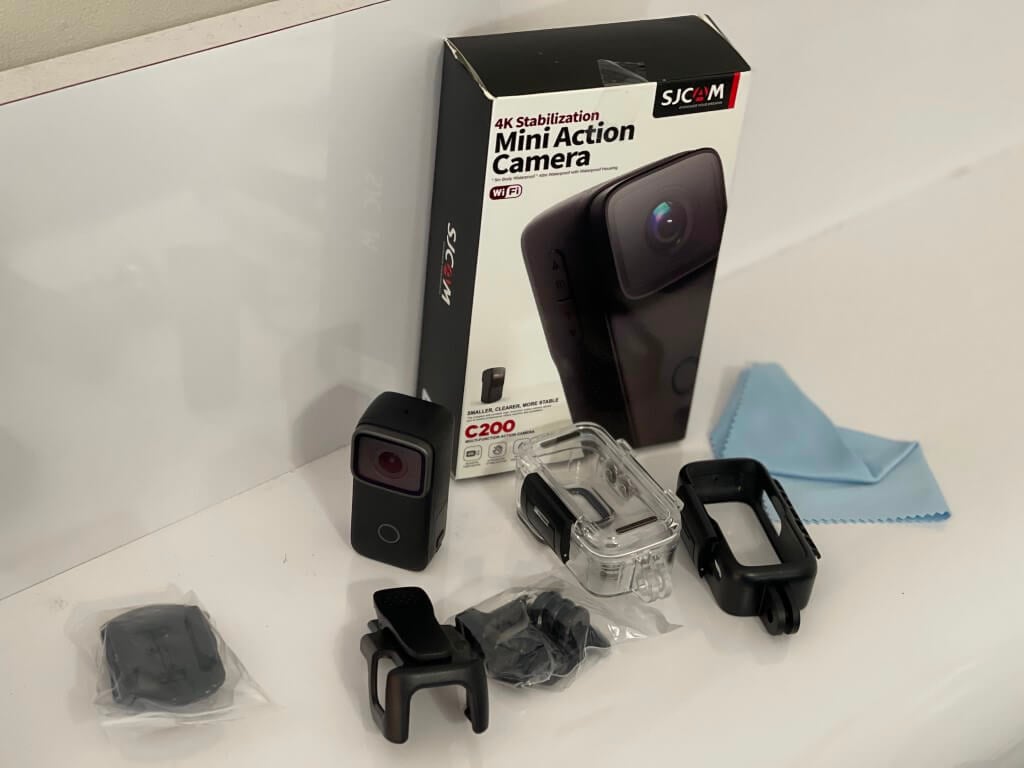 Well, the most important part is the sensors. This cam is powered by a Sony IMX335 sensor and a Novatek 96660 processor. There's full support for 4K video, 2K video, 1080p video, and 720p video. Do note, however, that the 4K support is a little bit of a marketing thing.

Other features onboard include the 1.28-inch screen (to preview images and videos,) 6-axis gyro stabilization, and Wi-Fi connectivity. Wired connections happen via USB-C, and the battery capacity comes in at 1200 mAH. Oh, and of course, you'll find a microSD card slot on board, for storing your footage. 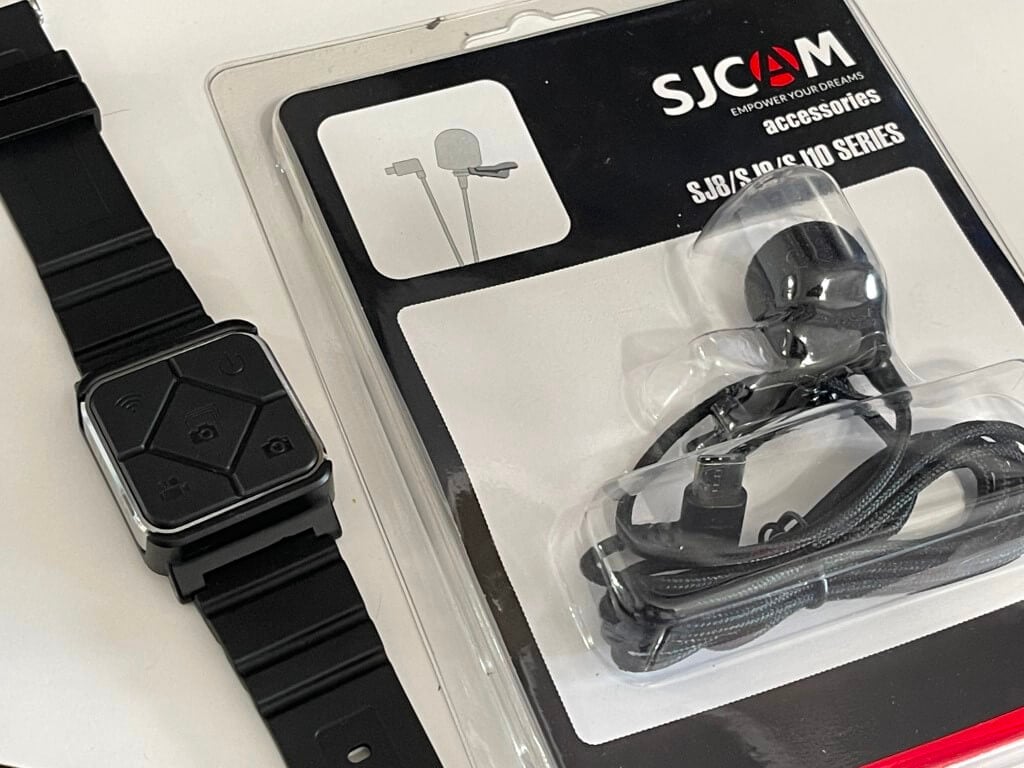 SJCAM includes some bundles in the box for the same price. You get waterproof housing, a support base, a frame case, a clip case, adhesive strips, and a rotating base mount. This helps you get started with the webcam with ease.

SJCAM also provided us with the SJ Remote, which can be worn on your hand and used with the SJCAM app to control the camera remotely. They even included an optional microphone, which plugs in via USB-C to help you boost your audio. We liked these extras as it makes using the action cam a bit more fun. 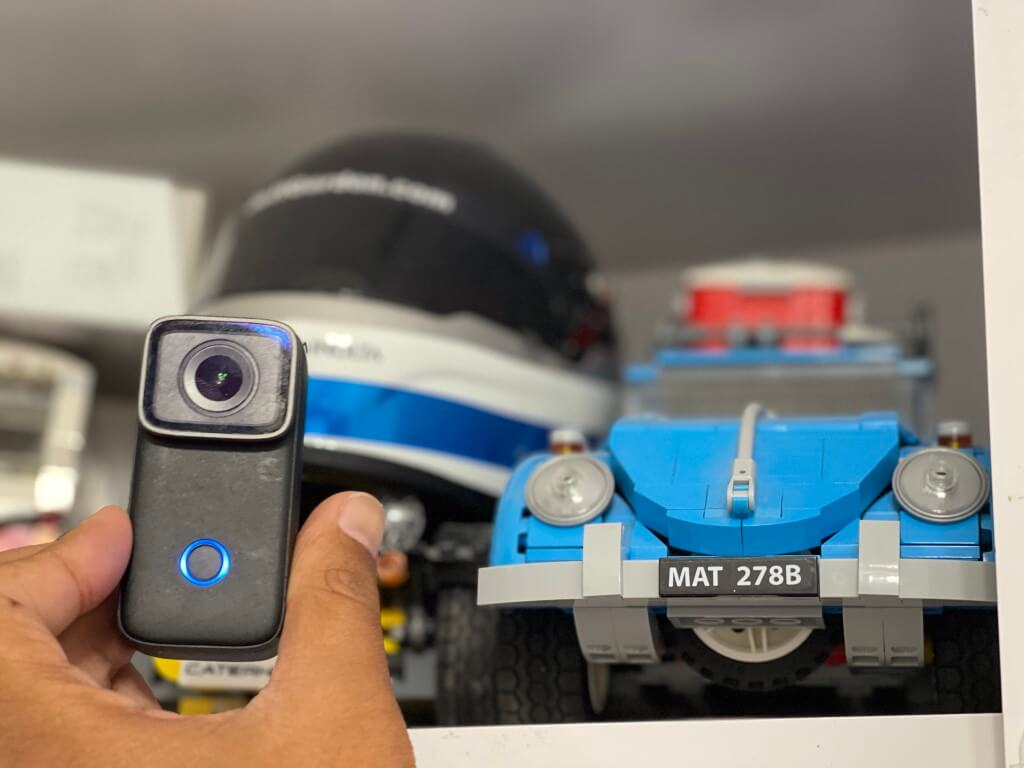 As an Action Camera, the SJCAM 200 is pretty basic. It is not as square as a GoPro and has a taller shape. Since this cam is designed for bi-directional shooting, the entire camera measures 2.6 x 1.3 x 1 inches. It's very compact, and can easily fit in your pocket and rotate around for various shooting conditions.

For the premium price of $129, there's a lot to like. This cam is made of metal and not plastic, which means it can survive tough conditions. That's also why it comes along with IP68 certification for being put in 5 meters of water. SJCAM says this action camera is 25% lighter and 23% smaller compared to a regular action cam.

The image preview and playback screen is also nice for the price. Similarly sized to what you get on a GoPro, the screen is pretty crisp for its size. You can quickly and easily glance at what you're recording while holding the SJCAM in your hand. I did wish it supported touch so navigation would be a bit easier. 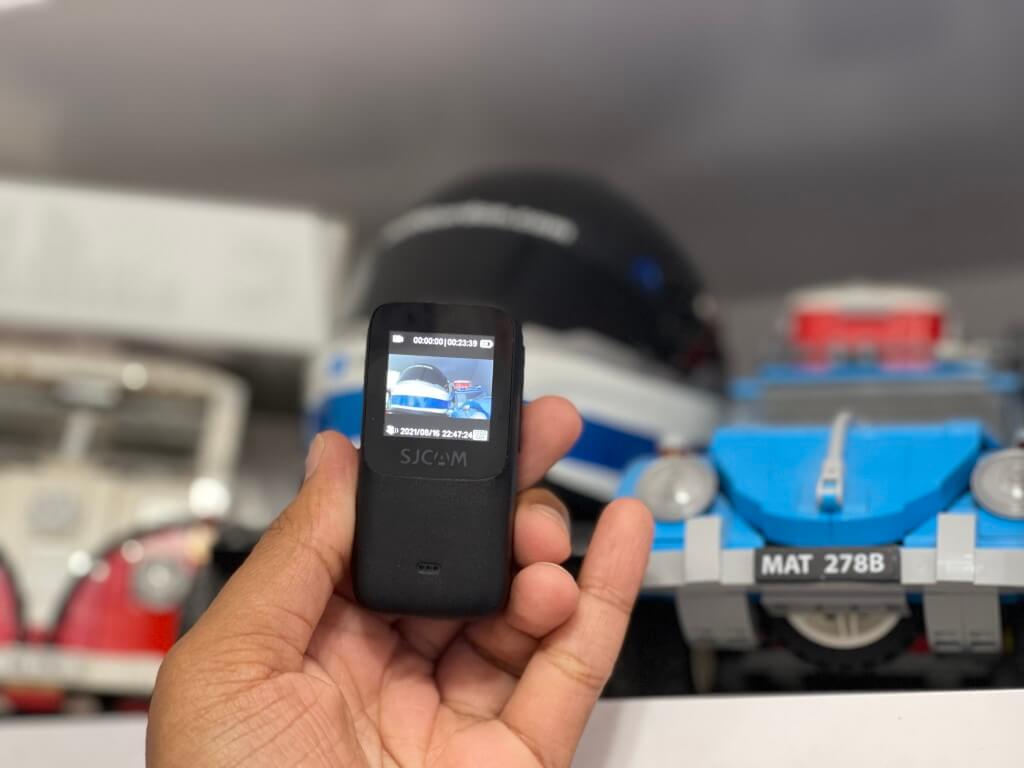 Note that there are some flaws in the design, however. The action camera doesn't have a tripod mount. So, to use it as a webcam, you'll have to "clip" it to the mount or at the top of the screen. You also can use one of the included support bases to do so, but a tripod mount would have been a lot more useful and universal.

To navigate the software of the SJCAM 200, you'll also have to depend a lot on the front and rear buttons. I wish the menu system was easier to navigate. Clicking and holding down on the small side buttons to switch between various modes really confused me, and sometimes the buttons were not responsive and I missed recordings.

When it comes to video quality, the SJCAM 200 ends up coming out fairly well. I used it as a webcam for OnPodcast, and you can check that episode out here to learn more. The webcam mode results were quite surprising, as the action cam didn't overexpose my face and outputted some really accurate colors and good levels of contrast. It is just a bit awkward to use SJCAM C200 as a webcam since it doesn't have a mount. I needed to hold it with my hand for the photo below and depend on the clip mount when filming the podcast.

Other than that, I also used the SJCAM as an action camera while riding my bike, and walking around. This sample footage can be seen above. Note that in my tests, I filmed at 1080p and at 60 frames per second. While SJCAM C200 can film at higher resolutions, there are frame rate limits. When filming at the cam's highest resolution, frames are capped at 24FPS, which isn't exactly the smoothest.

At 1080p, the frames are 60 frames per second, which is much smoother for action captures and post-editing. This falls short of making the SJCAM a true GoPro replacement, as GoPros can film at higher FPS and resolutions. But this sacrifice is expected for the budget-friendly price, and if you're filming in 1080p, no one will notice the difference. 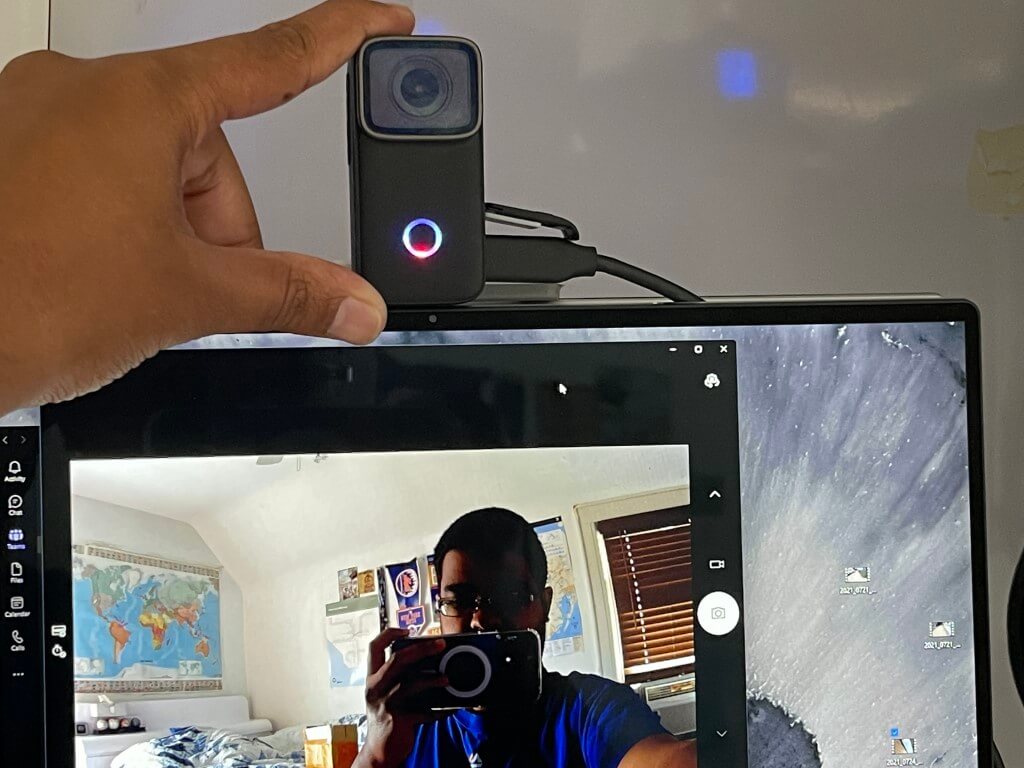 Overall, though, the SJCAM does a good job and keeps footage very smooth with the 6 axis stabilizer. It's not as smooth as a GoPro, or even if using a dedicated gimbal, but it does even out small motions like footsteps and vibrations from activities like biking. You can see this in the footage above.

The in-built microphones aren't bad either. It picked up my voice in a noisy city environment. I wish it would do a better job at canceling background noises, however. It's a little too sensitive to loud noises like trains, busses, or cars.

SJCAM also includes some software features which can let you switch between landscape and portrait mode, useful if you want to post videos to social media outlets like TikTok or Instagram.

As far as battery life goes, the SJCAM can run on like a pro. Advertised at 150 minutes, I got around 3 hours of life in a single day of testing, which isn't as bad. SJCAM noted to me that the C200 has face recognition as well as light-sensitive components. I'm assuming this is why it outputted some good videos when I used it as a webcam. 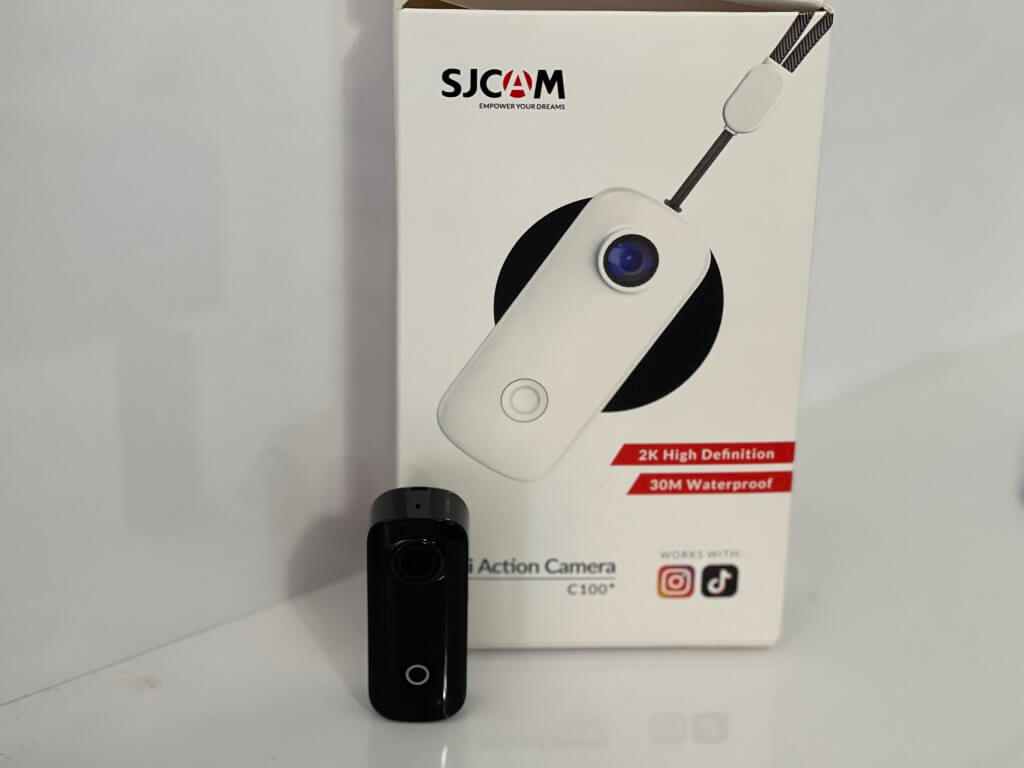 SJCAM sent along the $62 C100+ as a bonus for us to review. This action camera is a bit like the C200, but sans a display. Though the C200 has the same function, one of the differentiating factors is that it works with Wi-Fi connections to your phone so it record and save footage. However, you also can film manually by long-pressing the button to turn it on, and then click the button again. The cam is intelligent enough to auto-rotate the video as you move it.

Note that footage on the C100+ caps out at 2K resolution, and 1080p and 720p are also supported. We tried the C100+ wirelessly with our iPhone, and the camera feed loaded up but kept freezing. On Android, it eventually worked but froze up after a few minutes.

I would not recommend this product for streaming, since the SJCAM app seems to be very buggy. Other than that, for hands-free recording, the product has some good potential. It is compact, could be worn around the neck or on a helmet for recording, and is waterproof. The C100+ is even magnetic so it can attach to metal objects. Overall, it is a lot smaller than the C200, too. For $62, you can't go wrong.

The SJCAM C200 is a nice GoPro alternative. The design is durable, although it's missing a tripod mount, and it isn't too bad for the price. Video quality is also good, and the stabilization and sensors onboard mean that your action footage will come out looking amazing.