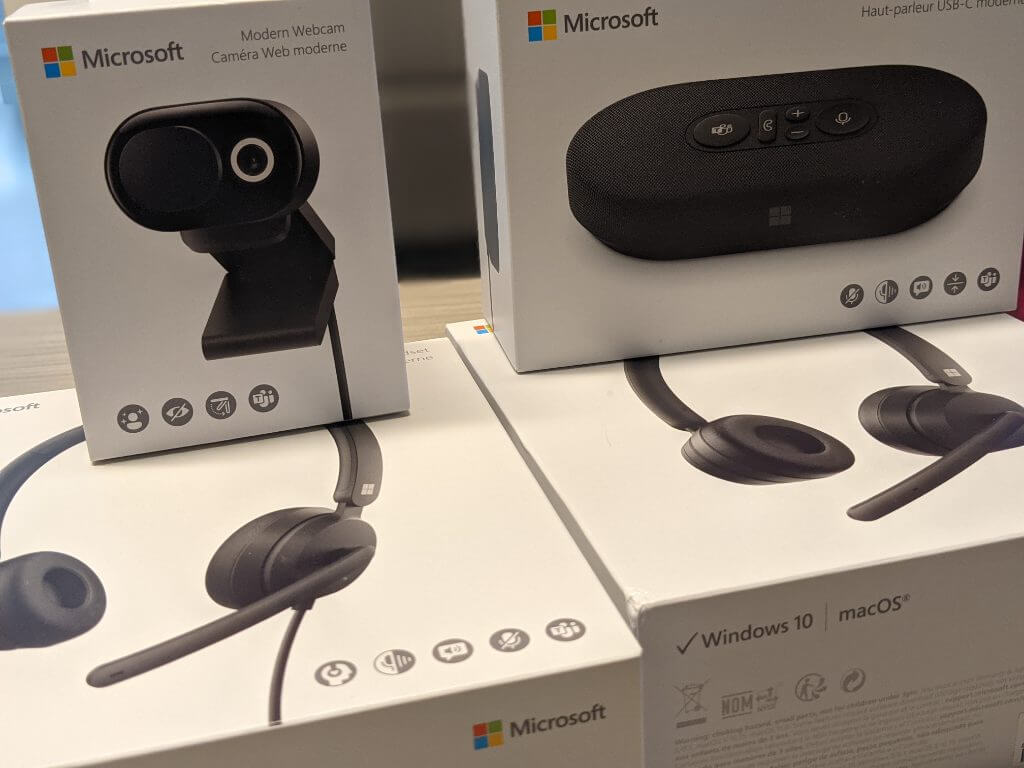 Microsoft's Moden Accessories line dropped at an apocryphal time for customers as the world slowly began to remerge from a pandemic induced quarantine.

During a year and some change, there was a fire sale at most electronic outlets on webcams, microphones, lights, headsets, speakers, and other home office accoutrement as employees revamped makeshift workspaces for extended use.

Microsoft's answer to the demand was a first party lineup of quality manufactured webcams, speakers, and headsets, unfortunately, its timing was just a few months off.

In April of this year, the company announced its products officially and by May they were on shelves, however, thanks to the increasing number of vaccinated individuals, people were making their way back to offices.

Fortunately, that's not the end of Microsoft's Modern Accessories story. 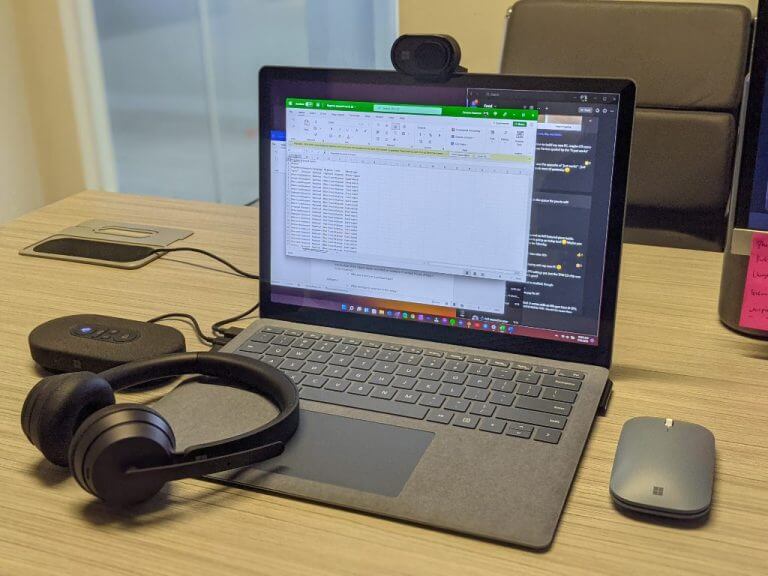 As the pandemic lingers, the landscape of traditional in-person meetings, conferences, or gathers remains influx. People are still opting to meet virtually while in the same building and weary of multi-use equipment which leaves a great opening for Microsoft to fill with its Modern Accessories line and users couldn't ask for a better quality to price option now.

Perhaps, it's a conflation of the Microsoft's overall design aesthetic and that which the company applies to the Surface lineup, but the Modern Accessories devices seem to borrow from the underlying minimalistic principles, for better or worse.

While none of the devices come in the now-iconic Surface magnesium grey color, they all come in the other most recognized color which is matte black. For anyone adhering to any custom color schemes at their workstations, matte black can often make a muted accent flare that doesn't distract from the overall look and feel. It's a trusty go-to color for tech. 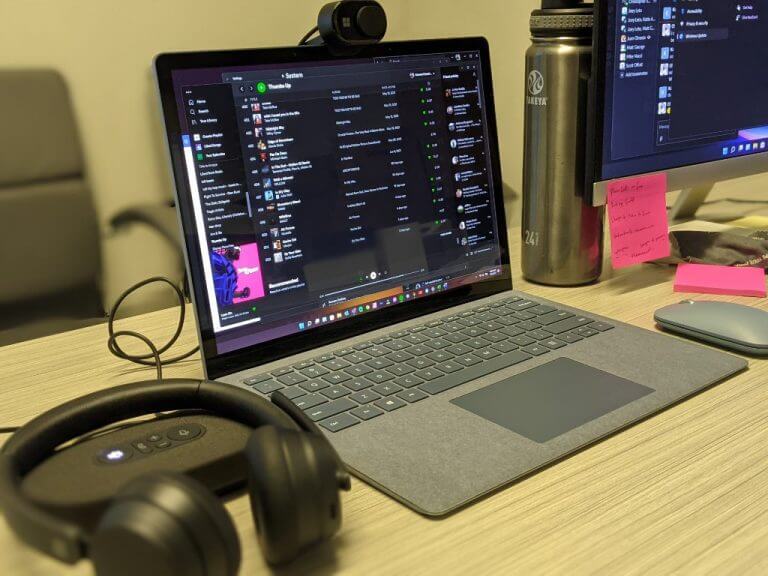 Aside from the iconography of the Teams logo and function indicators, the only other visible marking is the Microsoft logo subtly placed in various spots on the devices.

Lines, breaks in jointing and curves on the devices are mostly unabated and perceptually lend to the notion that the devices are made with minimal tooling which should result in a lasting experience over routine use, but we'll have to check back in a few more months to confirm.

While the headsets are practically identical in look and feel, it's the speaker and webcam that really allow Microsoft's aesthetic to distinguish itself from the market.

The speaker uses a netted fabric material over 2/3 of the casing which harkens to other speakers such as Google and Apple's home speakers. The overall size of the speaker is about the size of a large modern external hard drive. The speaker comes in its own travel case which proved to be handy in my use. There is also a USB-C connecting cable that wraps and buries itself within the bottom rubber compartment of the speaker. 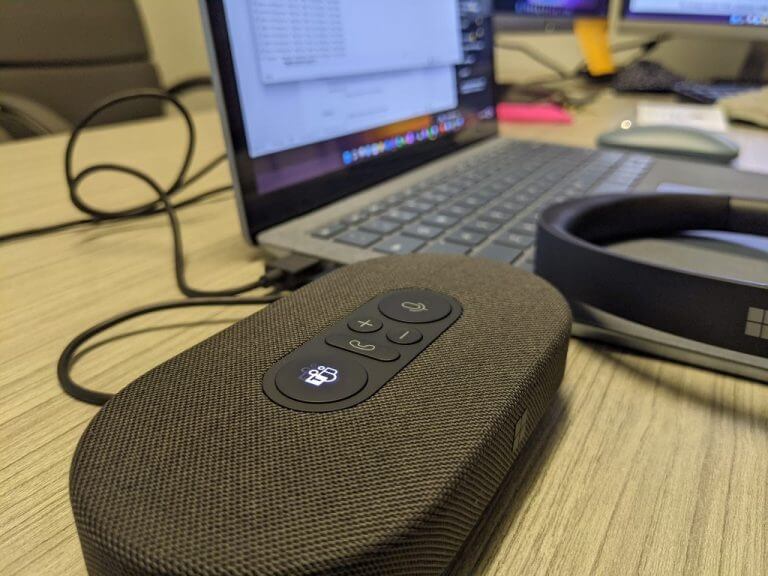 While I would have preferred to have a Bluetooth connection, the inclusion of a USB-C connector was at least forward thinking of Microsoft.

As for the camera, it straddles the line between the traditional dollar-coin sized rounded design of most cameras and the other option of elongated rectangle casings. Microsoft opted for an oblong design with a manual shutter cover. The overall look is distinguishable in a sea of top mounted rounded webcams in the office.

The camera uses the more traditional USB-A connector, while not as forward thinking as the speaker, does line up nicely with its own modern Surface hardware designs which offer one USB-A and one USB-C port.

The camera doesn't offer the greatest flexibility for up and down angles but manages to capture a wide field of view, so it compensates. 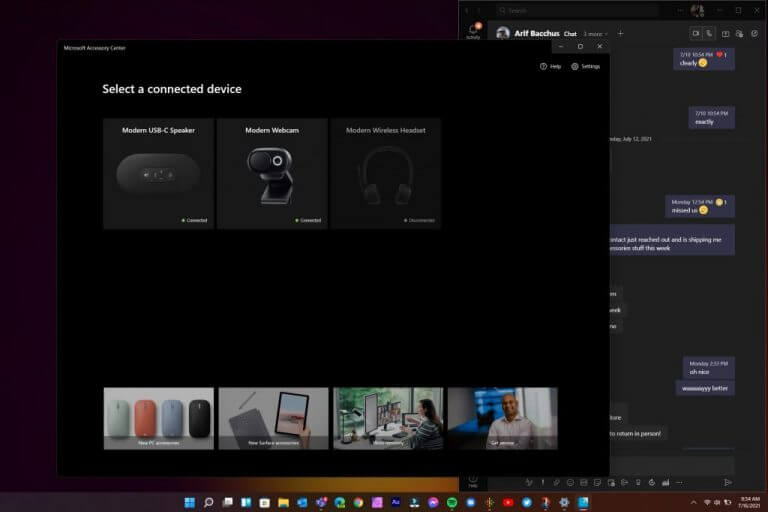 Regarding the headphone situation, Microsoft's Modern headsets were as impressive if not slightly better than the Sennheiser's I was previously using and shoulders above depending on the mics and speakers on laptops.

The wired headset does feel dense but not overly so and I've worn them for hours on end switching between conference calls, podcast, and music. The function buttons dangle just below the chest and should rest on desk just as easily to reduce addition weight on the head, neck and ears when worn.

The buttons are clearly displayed and jumping in and out of Teams calls worked about 80 percent of the time. There were times when pressing the Teams button to join a call brought up the screen to join but didn't automatically join the call. Ending calls, adjusting volume and muting worked as displayed.

The Teams integration shined with flares that included letting other members know when you hit the mute button, this was not present when using Zoom, WebEx or even Skype.

As for the call quality, I've had no complaints, and I've even conducted podcasts simply using the built-in mic on the headset and the quality between this headset and a Blue Yeti was negligible for the most part.

The flexing mic arm also endears the headset to being used like a regular set of headphones during work. While they're not noise canceling, they do offer remarkable sound quality. For bass heavy fans, the headset will be lacking but for those of us who spend most of their time listening to podcasts, these headsets are amazing.

The Bluetooth headsets mimics the Surface Headphones with its volume control dial, the democratization of the dial functionality is a welcomed feature for the price point. 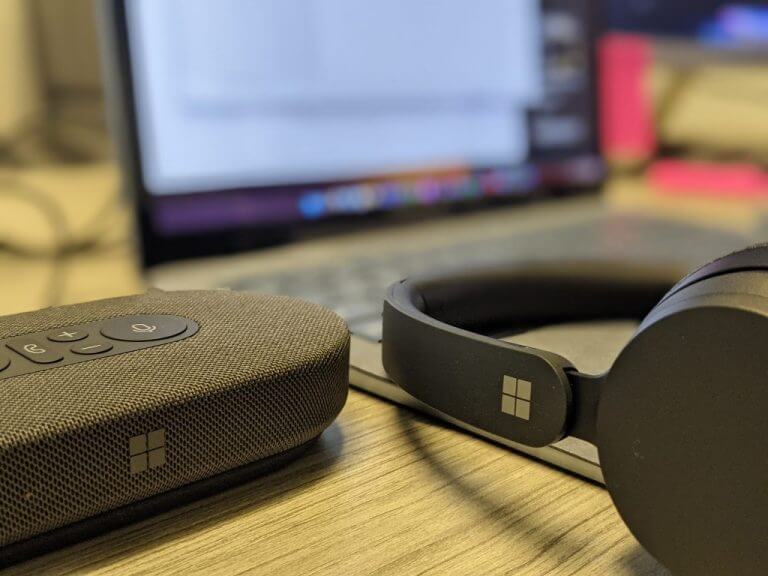 However, not all is rosy for the Bluetooth headset. Since Microsoft made concessions with removing the dongle surface area for buttons found on the wired headset, they've all been scrunched on the earcups of the Bluetooth headset. On the ears, the buttons are small, and take quite a while to develop muscle memory to nail the no-look muting, speaking and Teams call log in switches.

When in use, there is a voice indicator of battery life and reaming use time. While a full charge implies over 15 hours of use, I've been able to use the headsets over three days with moderate call and listening use, without a second prompt of near-ending battery life.

Moving away from the headset, the Microsoft Modern USB-C Speaker has been a pleasant surprise. The MM USB-C may not be Sonos or Apple Homepod levels of sophistication, it more than performs for its price and size.

The speaker sports the same Teams, Call, Speaker and volume keys as the headsets and they sit flush at the top of the device. A large Teams and speaker button flank the other functional buttons and light up when in use or muted. 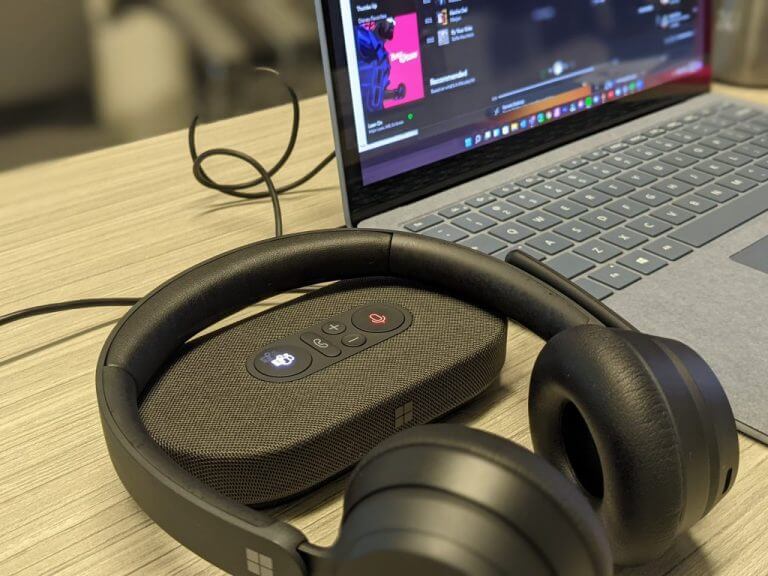 With a rubber bottom, there is little to no worry about the device sliding around, even on a tilted architect's desk.

The output of the speaker for Teams and other conference calls is noticeably clear and gets plenty loud. As for using the speaker for music, it has its limits in the mids where you could push distortion if you go too loud.

As I mentioned the connecting cord wraps around the base of the body and can clear roughly 26 inches so it doesn't go far from your computer but can be positioned into some convenient areas just on the outskirts of your main workstation.

Listeners on the other end claim that my voice came through clearly and background noise was minimal, even in a loud open-office setting.

Microsoft's Modern USB-C Speaker proposition is, however, a bit of a head scratch for individual use. The Modern headsets have better mic quality and becaue they sit directly over the ear; they also have better audio pick up. The speaker may be a must have for multiple speakers in a single room, but those days seem far and away for the moment.

Last up is the Microsoft Modern Webcam that does as good a job as most webcams listed on Amazon to date.

The video quality is clearer and thanks to an embedded light ring also brighter. A lesser known feature of the Modern Webcam includes a built in mic that can record your voice in a pinch, but I recommend carrying the speaker or headset for most occasions. 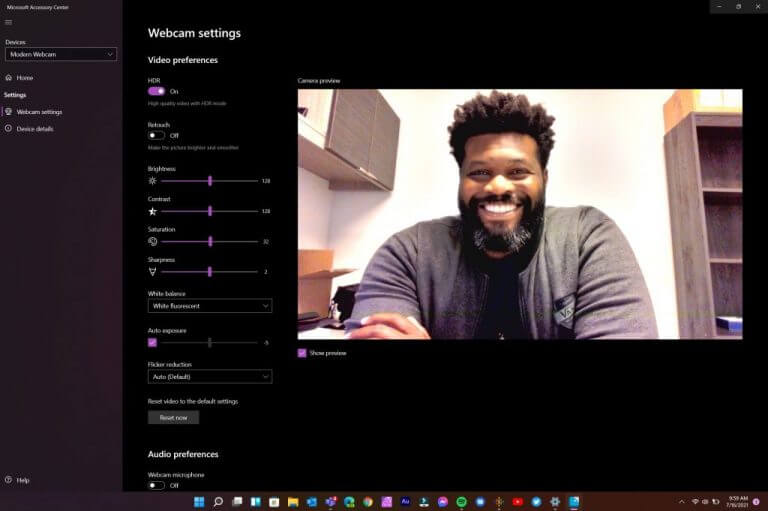 There are no buttons or additional markings outside of the full Microsoft type font that trails the mount of the device.

The manual shutter is clicky when used, but also is not necessarily stiff enough to remain shut if the device is tossed into a moving bag.

I've managed to not only seamlessly integrate the new Microsoft Modern Accessories into my daily routine which blends a mix of home office dedicated in-person workstation, I've also hosted several of our OnPodcast episodes with the devices.

Thanks to their minimalistic and compact design considerations, I keep the webcam, headset and speaker in my messenger bag with no extra bulk. In a pinch they've become quite handy and have me reconsidering the few hundred bucks I've already sunk into modernizing my workstations both at home and in-person.

There are some features I'm look forward to being adopted in their next iteration of these tools such as Windows Hello face recognition and authentication, heftier bass management in the headsets and speaker as well 2K resolution support.

Leveraging its history with mice and keyboards, Microsoft has proven it can maintain its high-quality device manufacturing while also producing something very functional.

The prices may appear outside the market, yet, for what's accomplished it feels perfectly in line for the travelling conference employee.