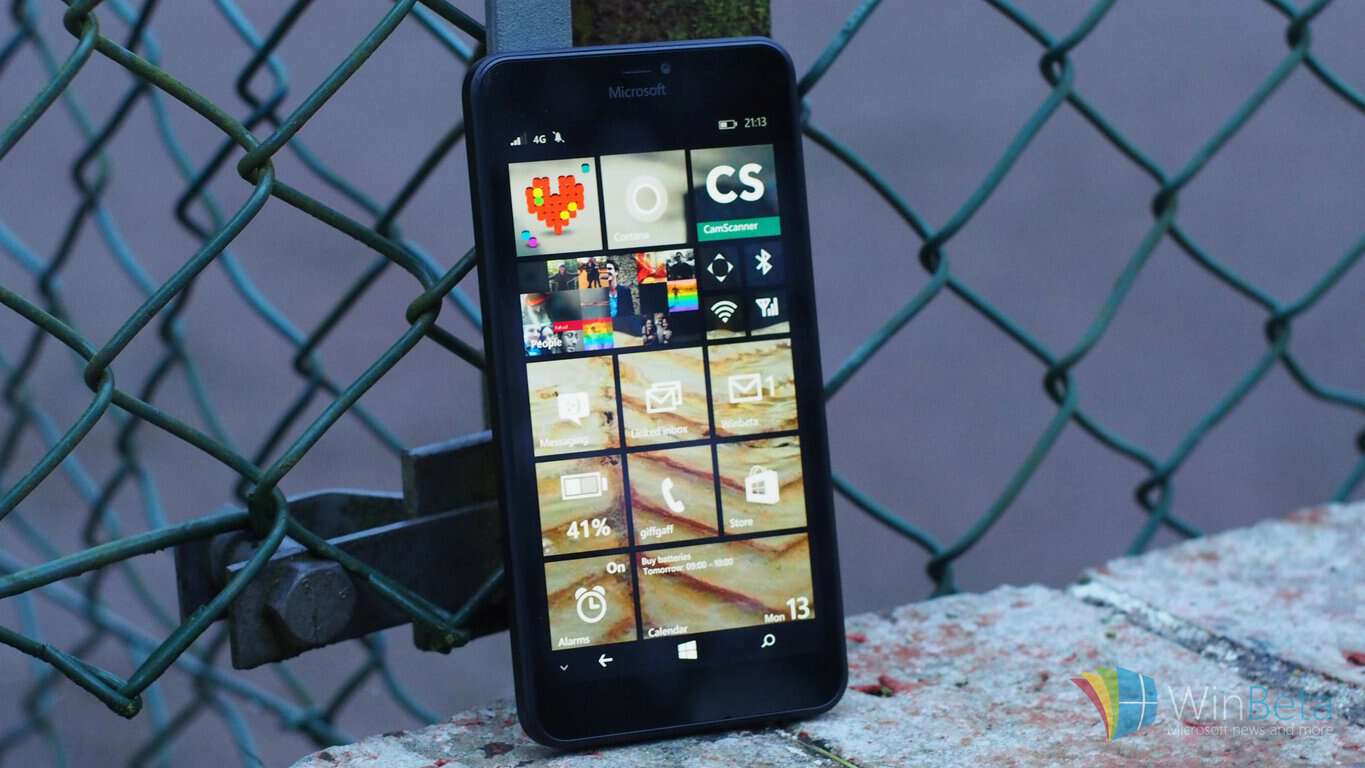 Less than a decade ago, miniaturization was still the go-to word in phone design. In a descent that started with the first ‘mobile’ devices during the late 1960’s, the evolution of the portable consumer telephone was towards ‘pocketability’, sleekness; it seemed this would never change. Then came the smartphone.

Proving that nothing dates faster than our perceptions of the future, the ‘phablet’ is now king. While Microsoft has turned up late to the party, sporting the usual grey suit and tortoiseshell glasses, it's hoping to get in on a little of the fun.

The Lumia 640 XL, as might be divined from the ungainly moniker, is a large phone. Or a small tablet, sometimes it can be a little difficult to tell. With a large screen and a solid weight, it certainly makes its presence felt in any pocket.

It isn’t only size that places a weight of expectation on the 640 XL, however, there is something more. In a year during which juicy Windows Phone releases have all but vanished, and in a decidedly downbeat climate, it is the most premium device so far to come bearing the branding of Microsoft.

So can the Lumia 640 XL truly stand up against the rest?

When first holding the 640 XL, it may be a little predictable to say, but it's hard to get over the sheer size of the thing.

I am an unashamed owner of small hands; and in my tiny mitts, the Lumia 640 XL, initially, seemed comically enormous. In the past, from feature phones to smartphones, I’ve never used anything bigger than the Nokia Lumia 930 as a daily driver. As such, when first picking up the Lumia 640 XL, I was unsure of what gymnastically impossible acts of legerdemain it would take to be able to fit it into my routine.

And over the first few days of use, this proved mostly to be the case. Never the most coordinated person, the device threatened to free itself from my grasp and hurtle cheerfully towards hard surfaces with reckless abandon. But, slowly, I began to improve, and after a week or so, using the Lumia 640 XL had become second nature.

A great deal of this is due to the balance of the device. In smaller phones, this is rarely a concern, for the entire device is intended to fit in the user’s palm. For the likes of a phablet, proper balance is the difference between comfortable typing while on the go and becoming an expensive paperweight.

Weighing in at 171g, the 640 XL is certainly not a supermodel in the same league as the likes of the Samsung Galaxy S6 but has a reassuring heft. In terms of looks, it is more of the same tale. The 640 XL is less the sister and more the giant mutant twin of the regular Lumia 640, so similar are they in appearance.

The front of the 640 XL is mostly taken up by the expansive 5.7-inch screen, above which sits another Microsoft logo, the 5MP front facing camera and the ambient brightness sensor. With the screen occupying so much real-estate on the device, it might be expected that it is worthy of being a central feature, and luckily it doesn’t disappoint.

At 720p and stretched across 5.7 inches, the screen achieves a pixel density of roughly 259ppi, and what does this mean? In everyday use, very little. While Full HD and higher screens are now all the rage, for many an accurately calibrated HD screen is more than enough. Indeed, while watching a video or playing games there is no noticeable pixelation. The only time when the resolution becomes noticeable is occasionally when reading black text against a white background, in these situations letters can become noticeably jagged.

As an IPS LCD screen, viewing angles are excellent. Even from extremes, the screen does not suffer from color wash out, or a loss of brightness. Being an LCD display, there is also very little of the excessive color saturation that now comes as standard with many AMOLED panels. Though colors are cooler than on such devices, for many this is quite desirable. Surprisingly for a budget display, the Lumia 640 XL also sports two features that have become synonymous with the Lumia line, Glance and double-tap to wake, adding to usability and helping to preserve battery life somewhat.

Under the hood, a quad-core Qualcomm Snapdragon 400 CPU clocked at 1.2GHz keeps everything chugging along, supported by an Adreno 305 GPU. And, generally performance is good; navigating around the OS is a mostly lag-free affair, and most apps open and close without issue. This is no doubt in small part due to the 1GB of RAM available, giving the Windows Phone OS a little space to breath.

But performance like this at the budget level is hardly surprising. Since at least the introduction of the Nokia Lumia 520 several years ago, one of the calling cards of Windows Phone has been an exceptional performance at the budget end of the market. For a long time, it has been unique in this, with budget Androids failing to compete. Now, however, they have caught up, with many far better specced options available for the price, so how does the Lumia 640 XL perform in other tasks?

The answer is slightly complicated: better and worse than might be expected. In titles such as Asphalt or Halo: Spartan Assault, performance is above adequate. Though the processor does its best to lightly grill the hand, there is little in the way of slowdown. And yet in other titles, things aren’t quite as rosy.

Subway Surfers and Timberman are hardly known as the most taxing titles in the Windows Phone app library, and yet they proved to be a considerable challenge for the older Snapdragon 400 CPU. At lower speed levels, everything was ok, but later, as the speed increases, texture pop-in and lag become so dramatic that these titles were rendered unplayable. With more and more Androids featuring the likes of the Snapdragon 615 and 410/15 for the same price or lower, it might have been prudent for Microsoft to be a little looser with the purse strings in this area.

There is also the matter of screen real estate. While the extra space makes viewing video content and reading more pleasurable (especially with the ability to hide the software keys for greater immersion), almost no apps make efficient use of the extra space. With everything simply scaled up, the potential benefits offered by the device’s size are squandered.

As for battery life, well that is another matter altogether.

One of the main advantages of having a larger device is quite straightforward: space. With more room to fill, batteries, in particular, can be much bigger than normal. This is quite clearly the case the 640 XL, sporting a massive (removable) 3000 mAh pack, which is significantly more than the norm for this price point.

And powered by the (mostly) battery efficient Windows Phone OS, the device can easily last for two days of moderate use, even more if used less. This must be taken with a pinch of salt, however. Given the general lack of apps in the Windows Phone Store, and given the slow performance of the processor when compared to other devices, the device limited my usage. I found myself using the device for listening to music, browsing the web, making a few calls and occasionally watching a few videos on YouTube. If this is your general use case scenario, then expect to see similar performance, this will understandably drop with heavier usage. Regardless, especially when compared to devices with smaller battery packs, this is an active performer.

GPS worked well, gaining a lock quickly, 4G speeds in the wider Bath, Bristol and Swindon area were also acceptable, receiving coverage even in areas of weaker coverage. Unfortunately, the Lumia 640 XL comes with only 8GB of internal storage, which is quite stingy for the price point. Thankfully, there is a MicroSD card slot, supporting cards up to 128GB in size. Coupled with the Windows Phone ability to install apps on the MicroSD card, this setup proves to be quite practical in everyday use.

More than anything else, more than the size, price or screen, what Microsoft apparently wants to emphasize with this device are its camera chops. With a big protruding rear-facing camera that is reminiscent of that on the Google Nexus 5, and with Zeiss branding on the box and the back, it is impossible to ignore.

And, on paper, the specs back up this optimism. The rear-facing module has 13 megapixels to play with, and an aperture of f2.0, which, in theory, should make for excellent performance. And luckily, especially for the price class, it is a very reliable performer.

In good lighting, the Lumia 640 XL had no trouble gathering plenty of detail, maintaining a pleasant sharpness across most of the frame. Most images are pleasingly contrast-y and white balance was mostly on point. The imaging power of smartphones is in their software, and the Lumia line, even at the budget level, still turns out some of the most pleasing images it is possible to find from such small sensors.

As for low-light performance, this is understandably where the sensor becomes something of a let down. Detail is lost; images suffer from a grey cast, and there is often a degree of luminescence. The Lumia 640 XL is not aided by the weedy LED lamp masquerading as a flash, which blinds subjects but does not compensate readily with requisite image quality.

The front-facing camera also proves to be something of a let-down. At 5MP, I had expected that performance might have been good. And when compared to the likes of the poor excuse on my Lumia 930, the difference was as night and day. Yet, images still appear washed out and noisy, even in good light.

Microsoft is doing great things with the cameras on budget Lumias. Although the likes of the 5XX series haven't exactly shined, the Lumia 640 XL certainly matches its brethren for performance. At this price point, the device is a significant contender, even against the Android Borg with its increasingly impressive components list.

Video, as might be expected, is flat and washed out.

The Lumia 640 XL, along with the Lumia 640, stands as one of the most solid all-round budget devices to ever come bearing the ‘Lumia’ brand. Though it is big, it is manageable, though the camera will not win any awards, it is a solid performer. The battery life proves to be mostly great, and the screen offers great color reproduction and decent sharpness. Though performance takes a hit when playing memory intensive games, in day to day usage it is more than adequate.

And yet, there are definite shortcomings. Low-light camera performance is filled with noise and generally poor, and the front-facing camera washes the contrast from most images. More than anything however, the it is the app-situation that still haunts Windows Phone. Against competitors in the Android space that are offering more for less, and with a far better selection of apps, can the Lumia 640 XL compete? The answer is, well, mostly. For those who are already married to Windows Phone devices, this is an easy sell, but for an incredulous public, more has to be done to justify a purchase.

Regardless, with solid specs,  if this is a sign of where Microsoft is taking the Lumia brand, then sign me up for the future.

If you have any questions regarding the device, I'd be happy to answer them in the comments below.

We would like to thank Clove Technologies UK for supplying our review unit. If you would like to purchase a Lumia 640 XL, we recommend that you do so from Clove here.