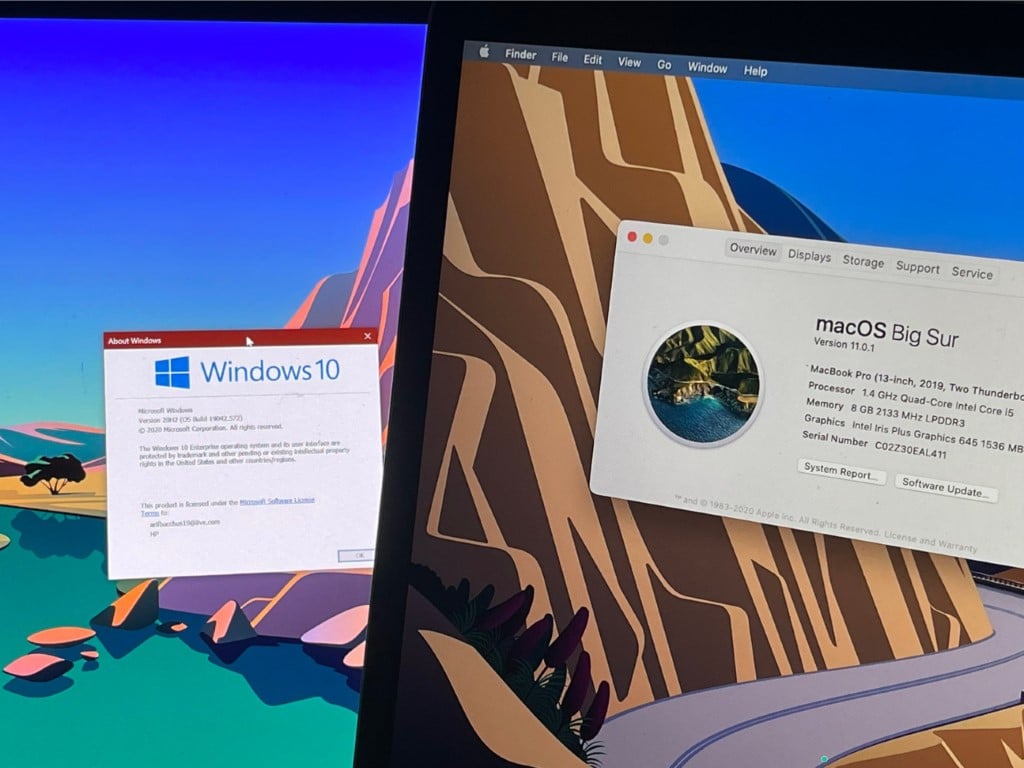 Months after trying the developer beta, I finally downloaded the final public version of macOS Big Sur to the main drive on my MacBook Pro. The last time I tried it out, I heavily criticized Microsoft and pointed out four things that they could learn from macOS Big Sur. This time, I actually used macOS Big Sur as my main operating system for a few days. Coming from using Windows 10, I learned a lot. Here are my impressions and comparisons to Windows 10.

The install experience and the bugs 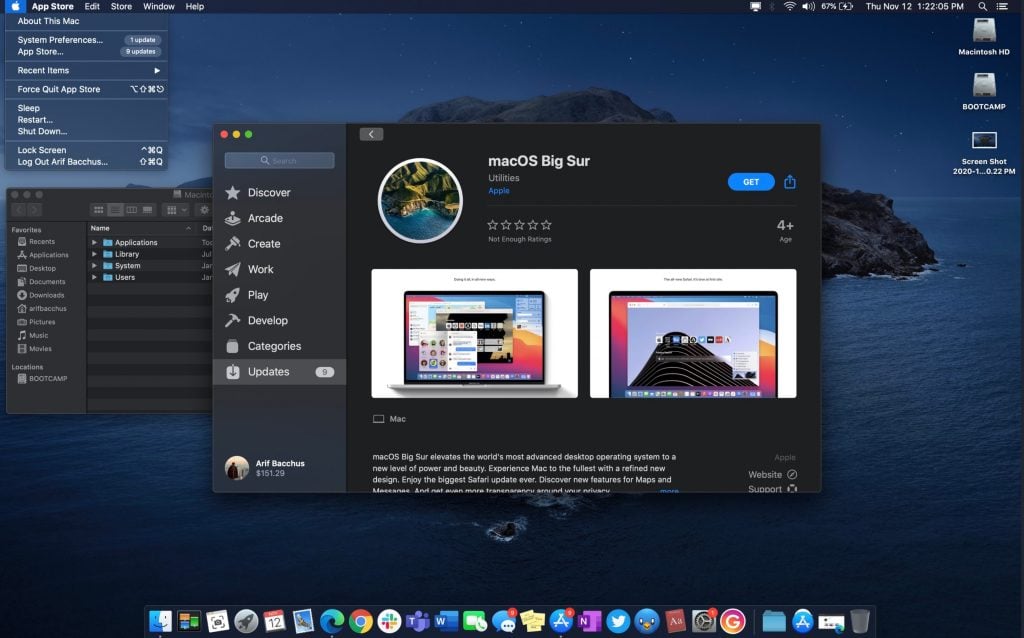 I begin my experience with the most obvious thing, installing macOS Big Sur. Installing Windows has always been an easy task for tech-savvy people such as myself. If you want the latest version of Windows 10, you just need to check Windows Update to download it. And, if it’s not there, you can download using the Upgrade Assistant tool or Media Creation tool from Microsoft. You even can use that to create an installer and burn it to a CD, or a USB-drive, too so you can “clean install” Windows.

Well, updating to macOS Big Sur isn’t necessary that easy. First off, it only appears in Apple’s App Store on macOS, and you need to click a link there, to initialize the download for it. It also should later appear in Software Update, too, but I didn’t see it there on launch day. Anyway, Apple had troubles rolling out the operating system, and I initially faced many error codes downloading, not to mention the long wait for it to install. By late night, though, it was fixed and I was up and running with the new OS.

Guess I jinxed it. I'm getting an "An error occurred while installing the selected updates." message. Sheesh, when did Apple become Microsoft? Haha.

Now for the TL;DR. Installing a new major version of macOS isn’t like how it works on Windows. You need to go through Apple’s App store to do it. And you can’t easily create an installer or burn it to a CD or USB-drive to manually clean-install it on another Mac, or your own. On macOS, you need a third-party tool or coding in Terminal to do this.

Apple also struggled to roll out its new version of macOS, which is quite surprising. Some people even are reporting that it’s bricking older MacBook Pro models. Again, surprising, but remember that Microsoft faced similar issues before, with the October 2018 Update which at one point was deleting some users’ files.

Rolling out major software updates is never easy, regardless of which side of the spectrum you stand on, and Microsoft has made big ground here. Major Windows Updates are now smaller in size, and faster to install. The November 2020 Update, for instance, took just 3 minutes to install on my PC. Compare that to macOS, which took close an hour.

The designs and the main user interface 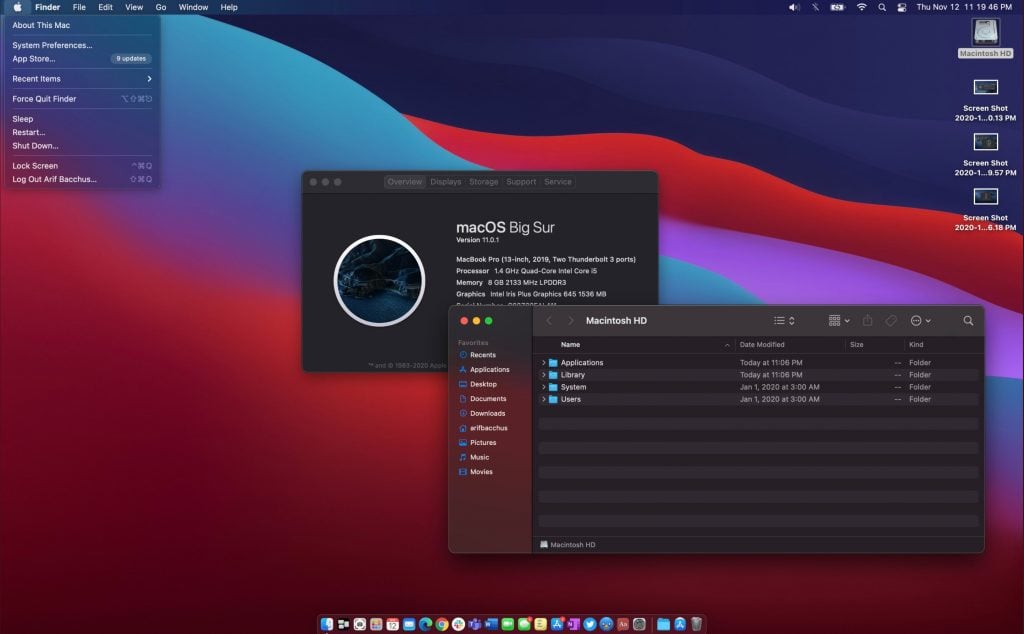 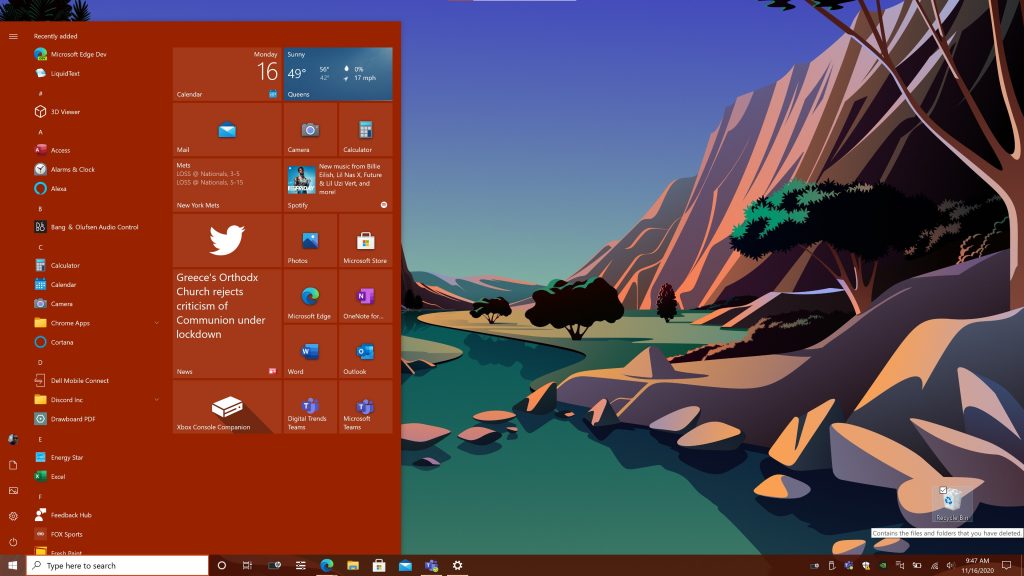 There’s no doubt that Windows 10 has changed a lot over the past five years. Microsoft has moved its design far forward, adding in touches of acrylic and Fluent Design everywhere, and tweaking the Start Menu so that the overall look of Windows is more concise.

Yet, Apple too has learned from experience. After installing macOS Big Sur, I feel as though my MacBook has blended together with my iPhone and my iPad. There’s a lot of new design language in Big Sur, and it’s a massive change from older versions of macOS which are flatter, and less consistent with the look and feel of Apple’s other platforms.

Those are small steps, but Apple still has the upper hand when it comes to design. MacOS Big Sur is just beautiful. Rounded corners, a floating dock, and the other little things I’ll be discussing throughout this piece make a difference. It is clean, concise, and downright beautiful everywhere you look in the operating system, other than just the dock and the main desktop.

The Finder vs the File Explorer 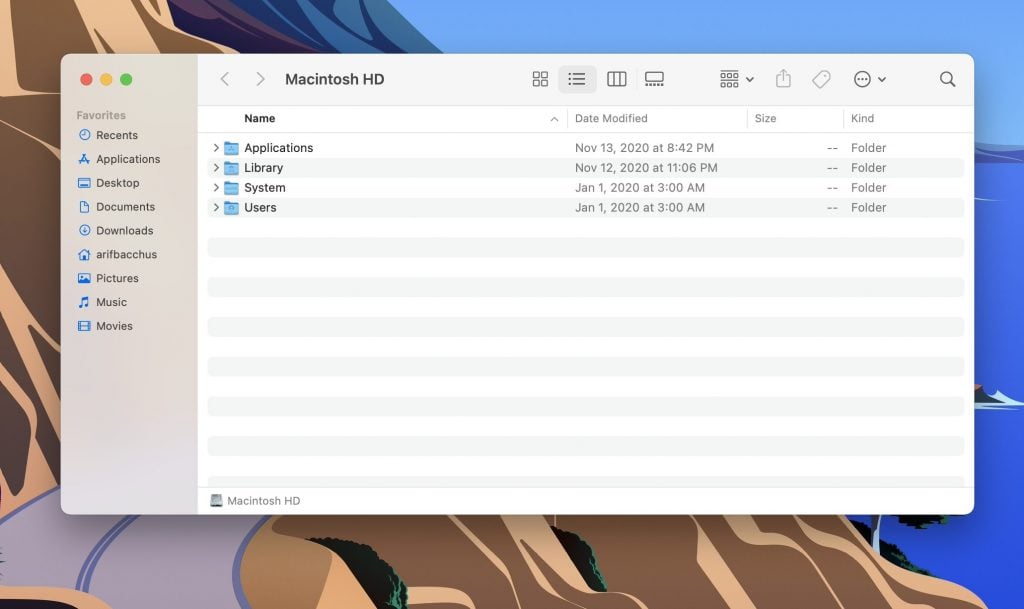 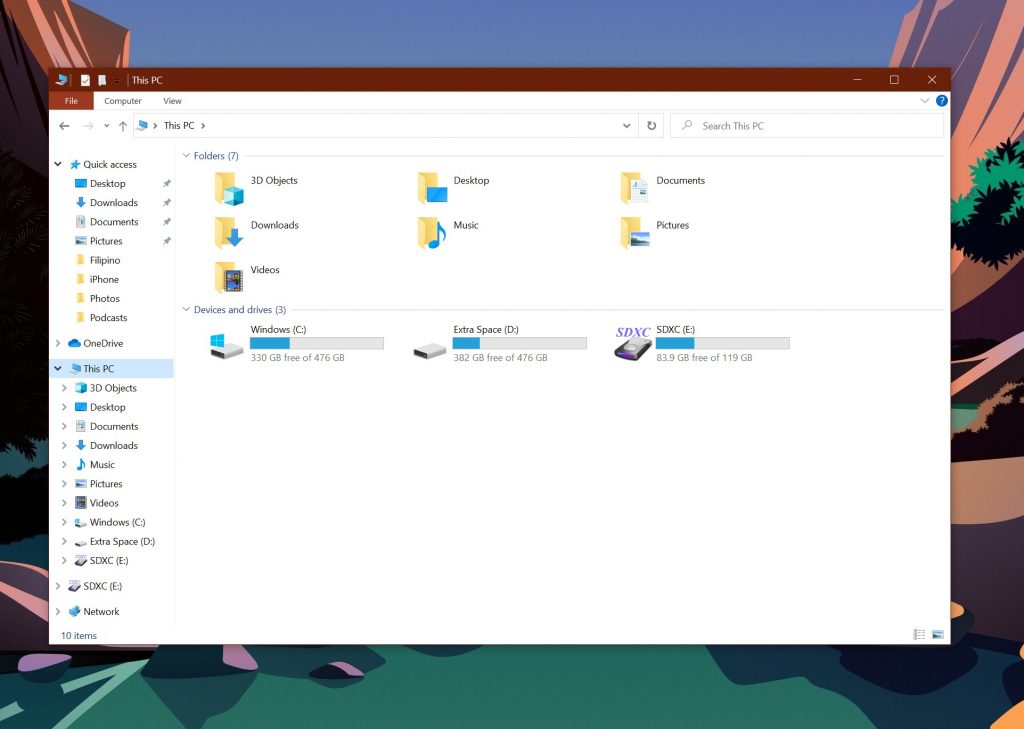 A lot of the time I spend on any of my laptops entails using the File Explorer on Windows, or the Finder in macOS. The Windows 10 File Explorer hasn’t changed much over the past few years, but in macOS Big Sur, Apple gave the Finder a big redesign. It’s here where I see the biggest differences between macOS and Windows 10. In macOS, the Finder actually looks good and just works.

Starting with just the Finder, the experience is massively different from anything on any other macOS version. With the switch in design language, everything in Finder is a bit wider, longer, and more spaced-out. The sidebar is also bigger, giving you a full-height and more room to see your various folders. It puts emphasis on the stuff you want to find.

Apple also removed the lines between the sidebar and the controls, moving everything into a bar at the top. They’ve also collapsed search, with an icon. Combined with rounded corners, and the dark mode, it’s a clean look. Not to mention the ability to open tabs in Finder, too.

Oh, and how about opening files, etc in the background? It will “float” a Finder window in the middle of your screen, rather than where your mouse clicked, as it is in Windows 10.

Now, looking at the File Explorer, it has not changed much in the past five years. The overall design is still similar to how it was in Windows 8. The navigation bar, search box, icons, and all. There is a saying that goes if it ain’t broke, don’t fix it. But, File Explorer could use some of the same changes as macOS Big Sur’s finder.

The search bar can be collapsed, the corners could be rounded, we could get back the Sets and tabbing feature which was removed, and we could use some consistency in the dark mode. The list goes on. Even third-party apps have a better look and feel than Microsoft’s own File Explorer. It’s time for Microsoft to move on, and I hope we see this in Windows 10X, soon.

The Action Center vs the Control Center 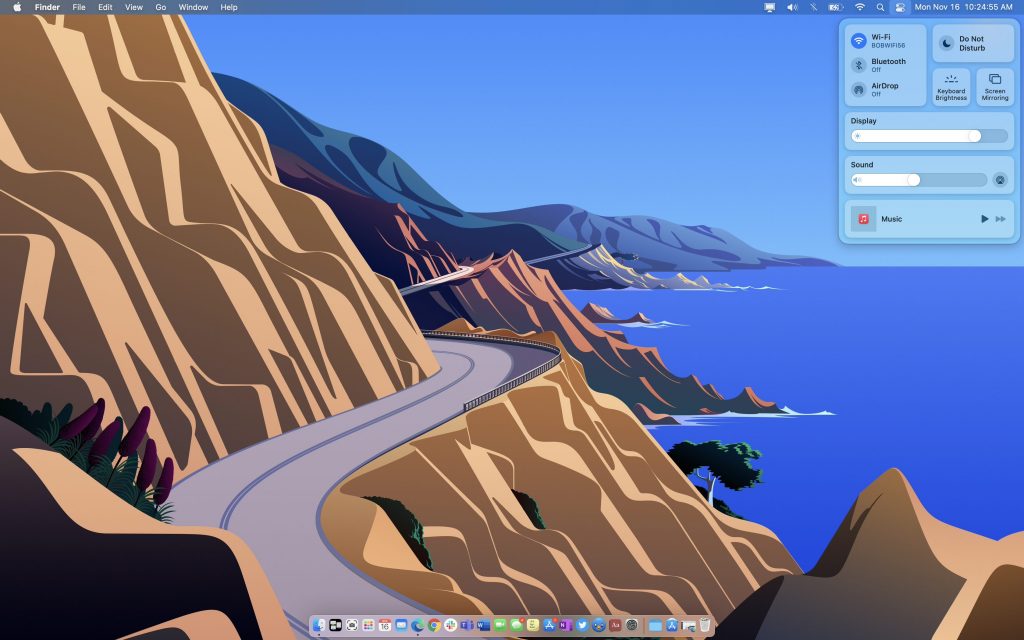 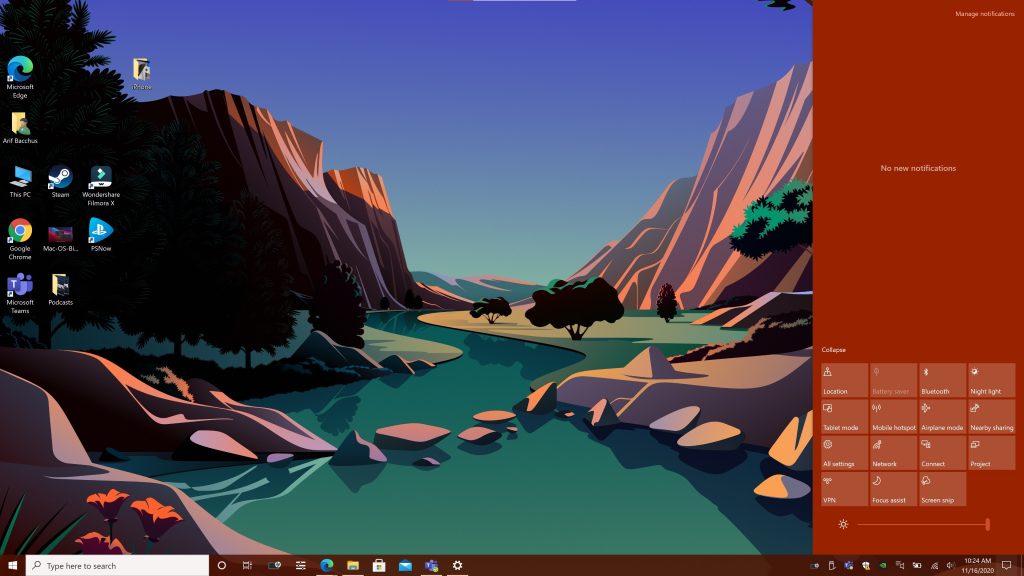 Other than the Finder and File Explorer, other core areas of macOS and Windows include the Action Center and Control Center. From here, you can toggle quick settings like brightness, WiFi, Bluetooth, etc. Oddly enough, despite Windows being designed for tablets and 2-in-1s, I feel as though Apple has the upper hand when it comes to this area.

In macOS, the Control Center is at the top of the screen, When you want it, you just drag up top, and click it and enjoy simple sliders for the things you need. However, In Windows, you’ll need to drag your mouse to the bottom to access it.

Often, it feels very cluttered too, with too many squared-off buttons for too many settings that aren’t all necessary touch-friendly. It’s ugly.

macOS, though, goes the way of iPadOS and iOS 14. There’s just a hub for what you need, and what you need only. There’s the main hub for connectivity, including WiFi, Bluetooth, and Airdrop. And another for keyboard brightness, and screen mirroring. The display and count controls, meanwhile, are clean and efficient, with sliders just as you’d see on a phone.

Oddly enough, though macOS is catered for traditional laptops, this design would be perfect for Windows, and touch. It makes me jealous. Yes, Microsoft did add sliders to the Action Center many years ago for brightness., but even if you go into tablet mode, it isn’t concise. Your Action Center in tablet mode is the same as desktop. Apple is showing Microsoft how sliders should be done. 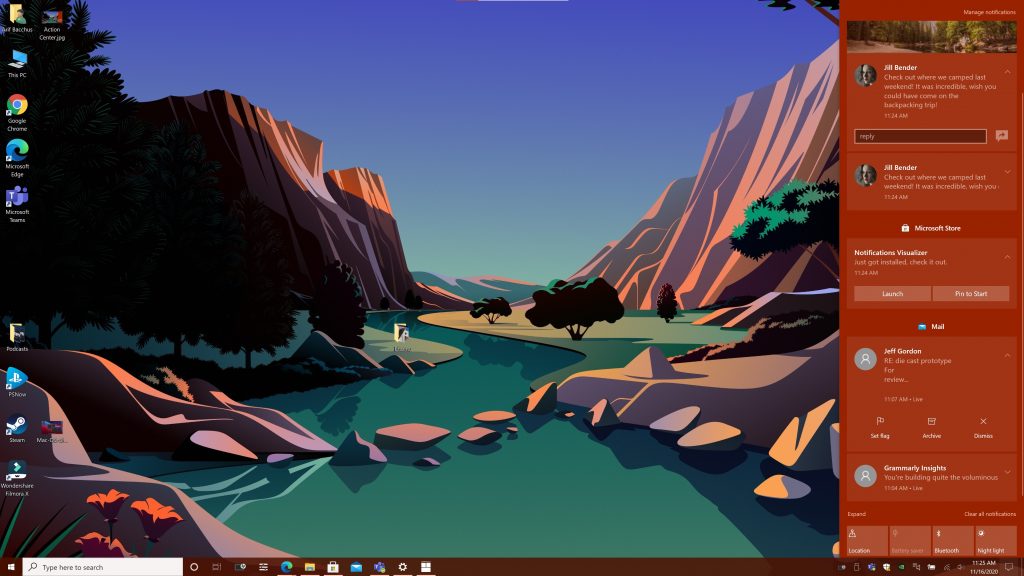 As I continued to use macOS Big Sur, one thing that I really ended up appreciating is the way that the operating system handles notifications. On Windows, especially with the October 2020 Update, Microsoft made subtle tweaks to notification tiles so they’re easier to understand as you see it pop up as a “toast tile.” However, macOS is still way ahead.

On Windows in the Action Center, you’re currently not able to group notifications by type. If you’re getting emails from Outlook, you’ll have an entire list of notifications relating to that. Notifications in Windows also don’t “float” so well. They are tiled, to match the accent color of your system.

On the contrary, on macOS, things feel like they do on a mobile phone or a tablet. Notifications are grouped by type and you can expand and collapse them as you please. And, there’s no sold background to the notification itself. It floats. Not to mention, the addition of Widgets here, too. These now appear just like they do on iOS, coming in various sizes and shapes.

All in all, it quite beautiful looking. I do hope Microsoft could deliver some of that change to Windows, as well. I love the way Action Center works, but it could use some a face lift. After five years, it’s looking old.

The stock apps and settings 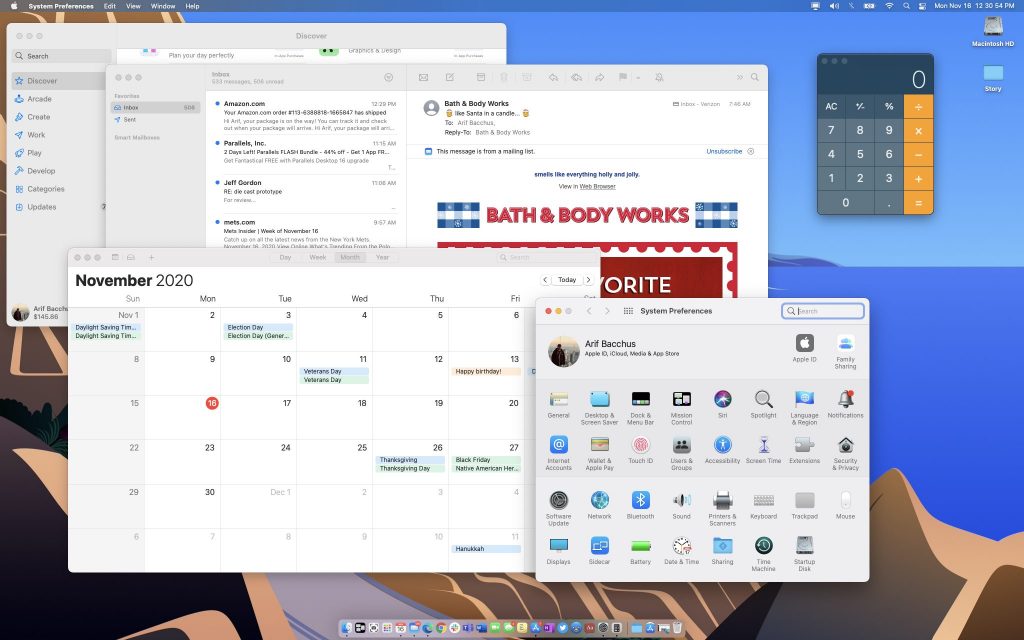 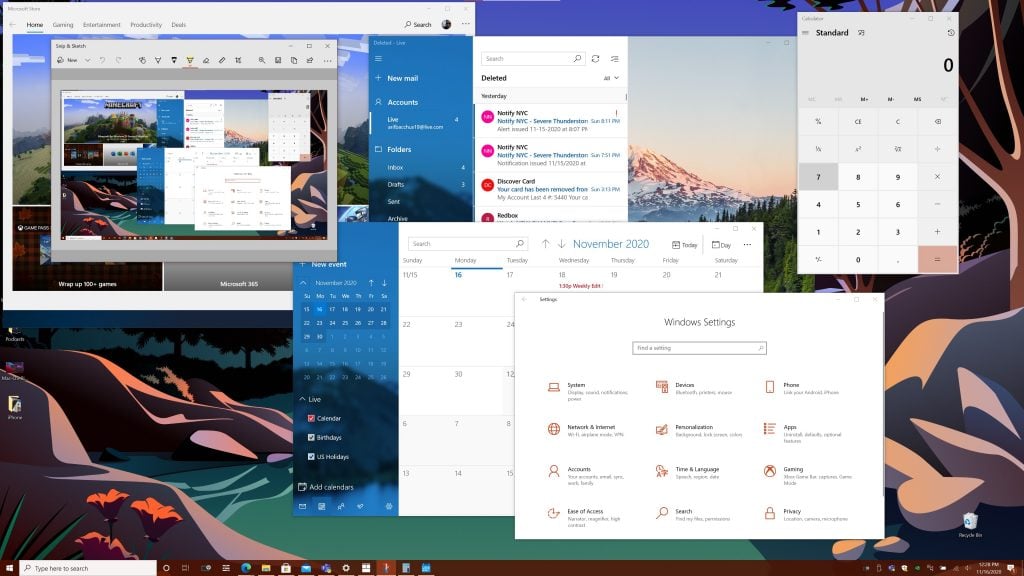 Finally, I want to touch on the stock apps experience on Windows and macOS. In macOS Big Sur, Apple made moves to bring iOS and macOS closer together. What this means is that stock apps look and feel a bit similar (and have the same features) as they would on an iPhone or an iPad. This isn’t a bad thing, as it helps create a clean and consistent look, especially in apps like iMessage or FaceTime.

That’s something Microsoft can learn from. For instance, on Windows 10, the Mail and Calendar apps are feeling dated. With ugly sidebars, the app needs a new coat of paint. Even the settings app isn’t as concise as you’d expect. Some settings aren’t in the modern settings app but are buried away in the classic control panel.

But I do think there’s one thing Apple learned from Microsoft. The new Safari browser in macOS feels very familiar to an Edge user. It now has options to customize the start page with an image, native translation, as well as data privacy features, and tracking prevention. Still not enough to get me to switch, though, as I have my feet in Microsoft’s ecosystem.

As much as I have “slammed” Microsoft so far, as my coworker argued many months ago, there’s a key ending point to make in this comparison. I’ll repeat it again. MacOS Big Sur can be seen as a fresh cost of paint on the same functionality offered in Windows.

Windows 10 will always be my main operating system, as it’s built for productivity with window tiling, virtual desktops, and a lot more.  However, it’s great to see what can happen if the perfect design comes together. We know that Microsoft is working to bring Windows 10X to single-screen devices, but for now, it can serve as lessons learned. There’s a lot of visual change in Windows that’s needed, and for now, Apple has a more pretty operating system.